by Kendra Cherry: Maslow believed that physiological and psychological needs motivate our actions… 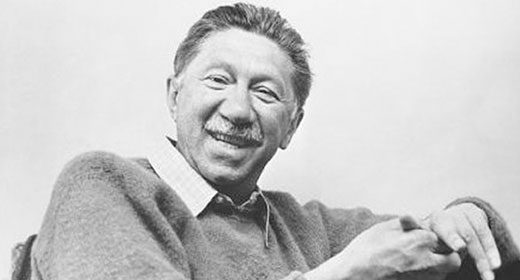 Abraham Maslow’s hierarchy of needs is one of the best-known theories of motivation. Maslow’s theory states that our actions are motivated by certain physiological and psychological needs that progress from basic to complex.

Abraham Maslow first introduced the concept of a hierarchy of needs in his 1943 paper, titled “A Theory of Human Motivation,” and again in his subsequent book, “Motivation and Personality.” This hierarchy suggests that people are motivated to fulfill basic needs before moving on to other, more advanced needs.

While some of the existing schools of thought at the time—such as psychoanalysis and behaviorism—tended to focus on problematic behaviors, Maslow was more interested in learning about what makes people happy and what they do to achieve that aim.

As a humanist, Maslow believed that people have an inborn desire to be self-actualized, that is, to be all they can be. To achieve this ultimate goal, however, a number of more basic needs must be met. This includes the need for food, safety, love, and self-esteem.1

Maslow believed that these needs are similar to instincts and play a major role in motivating behavior.2 There are five different levels of Maslow’s hierarchy of needs, starting at the lowest level known as physiological needs.

In addition to the basic requirements of nutrition, air, and temperature regulation, physiological needs also include shelter and clothing. Maslow included sexual reproduction in this level of the hierarchy as well, since it is essential to the survival and propagation of the species.

At the second level of Maslow’s hierarchy, the needs start to become a bit more complex. At this level, the needs for security and safety become primary.

People want control and order in their lives. Some of the basic security and safety needs include:

Finding a job, obtaining health insurance and health care, contributing money to a savings account, and moving to a safer neighborhood are all examples of actions motivated by security and safety needs.

Together, the safety and physiological levels of Maslow’s hierarchy of needs make up what is often referred to as “basic needs.”

The social needs in Maslow’s hierarchy include love, acceptance, and belonging. At this level, the need for emotional relationships drives human behavior. Some of the things that satisfy this need include:

In order to avoid loneliness, depression, and anxiety, it is important for people to feel loved and accepted by others. Personal relationships with friends, family, and lovers play an important role, as does involvement in groups—such as religious groups, sports teams, book clubs, and other group activities.

At the fourth level in Maslow’s hierarchy is the need for appreciation and respect. Once the needs at the bottom three levels have been satisfied, the esteem needs begin to play a more prominent role in motivating behavior.

People need to sense that they are valued by others and feel that they are making a contribution to the world. Participation in professional activities, academic accomplishments, athletic or team participation, and personal hobbies can all play a role in fulfilling the esteem needs.

Together, the esteem and social levels make up what is known as the “psychological needs” of the hierarchy.

At the very peak of Maslow’s hierarchy are the self-actualization needs. Self-actualizing people are self-aware, concerned with personal growth, less concerned with the opinions of others, and interested in fulfilling their potential.

“What a man can be, he must be,” Maslow explained, referring to the need people have to achieve their full potential as human beings.

Maslow’s said of self-actualization: “It may be loosely described as the full use and exploitation of talents, capabilities, potentialities, etc. Such people seem to be fulfilling themselves and to be doing the best that they are capable of doing. They are people who have developed or are developing to the full stature of which they capable.”

Press Play for Advice on Reaching Your Dreams

Hosted by Editor-in-Chief and therapist Amy Morin, LCSW, this episode of The Verywell Mind Podcast, featuring best-selling author Dave Hollis, shares how to create your best life. Click below to listen now.

Progressing Through the Pyramid of Needs 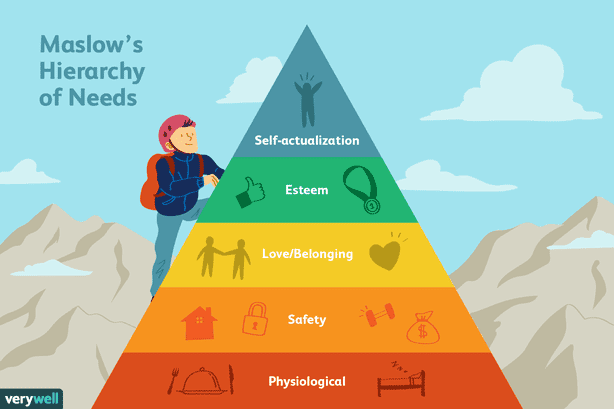 Maslow’s hierarchy of needs is often displayed as a pyramid. The lowest levels of the pyramid of needs are made up of the most basic needs while the most complex needs are at the top.

Once lower-level needs have been met, people can move on to the next level of needs. As people progress up the pyramid, needs become increasingly psychological and social.

At the top of the pyramid, the need for personal esteem and feelings of accomplishment take priority. Like Carl Rogers, Maslow emphasized the importance of self-actualization, which is a process of growing and developing as a person in order to achieve individual potential.

Maslow’s hierarchy of needs can be separated into two types of needs: deficiency needs and growth needs.4

While the theory is generally portrayed as a fairly rigid hierarchy, Maslow noted that the order in which these needs are fulfilled does not always follow this standard progression.

For example, he noted that for some individuals, the need for self-esteem is more important than the need for love. For others, the need for creative fulfillment may supersede even the most basic needs.

Maslow’s theory has become wildly popular both in and out of psychology. The fields of education and business have been particularly influenced by the theory. But Maslow’s concept has not been without criticism. Chief among the long-held objections are:

Some of the more recent critiques suggest that Maslow was inspired by the belief systems of the Blackfoot nation, but neglected to acknowledge this.7 Maslow’s studied the Northern Blackfoot tribe as an anthropologist. However, this foundational basis disappeared over time, causing him to misuse the concepts he was originally there to assess.8

Regardless of these criticisms, Maslow’s hierarchy of needs represented part of an important shift in psychology. Rather than focusing on abnormal behavior and development, Maslow’s humanistic psychology was focused on the development of healthy individuals.

There has been relatively little research supporting Maslow’s theory, yet the hierarchy of needs is well-known and popular both in and out of psychology. And in a study published in 2011, researchers from the University of Illinois set out to put this hierarchy to the test.9

What they discovered is that, while the fulfillment of the needs was strongly correlated with happiness, people from cultures all over the world reported that self-actualization and social needs were important even when many of the most basic needs were unfulfilled.

Such results suggest that while these needs can be powerful motivators of human behavior, they do not necessarily take the hierarchical form that Maslow described.

The Expanded Hierarchy of Needs

In 1970, Maslow built upon his original hierarchy to include three additional needs at the top of his pyramid, for a total of eight:

A Word From Verywell

Whether you accept Maslow’s hierarchy of needs or not, his theory shines a light on the many needs we have as human beings. And even if we don’t all place these needs in the same order, keeping them in mind when interacting with others can help make our interactions more caring and respectful.