The Best Foods To Feed Your Gut Microbiome

by Anahad O’Connor:  The microbes in your gut can influence mental health, heart risk, weight gain and even sleep, which is why you need to eat a wider variety of quality food… 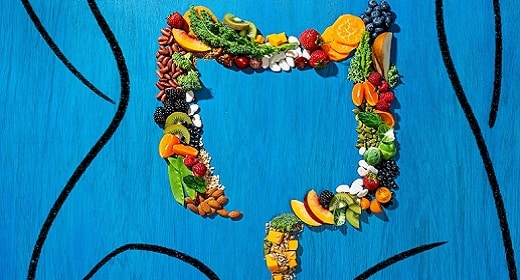 Every time you eat, you are feeding trillions of bacteria, viruses and fungi that live inside your gut. But are you feeding them the right foods?

Scientists used to know very little about these communities of microbes that collectively make up the gut microbiota, also known as your gut microbiome. But a growing body of research suggests that these vast communities of microbes are the gateway to your health and well-being — and that one of the simplest and most powerful ways to shape and nurture them is through your diet.

Studies show that our gut microbes transform the foods we eat into thousands of enzymes, hormones, vitamins and other metabolites that influence everything from your mental health and immune system to your likelihood of gaining weight and developing chronic diseases.

Gut bacteria can even affect your mental state by producing mood-altering neurotransmitters like dopamine, which regulates pleasure, learning and motivation, and serotonin, which plays a role in happiness, appetite and sexual desire. Some recent studies suggest that the composition of your gut microbiome can even play a role in how well you sleep.

But the wrong mix of microbes can churn out chemicals that flood your bloodstream and build plaque in your coronary arteries. The hormones they produce can influence your appetite, blood sugar levels, inflammation and your risk of developing obesity and Type 2 diabetes.

The foods that you eat — along with your environment and your lifestyle behaviors — appear to play a much larger role in shaping your gut microbiome than genetics. In fact, genes have a surprisingly small effect. Studies show that even identical twins share just one third of the same gut microbes.

Your ‘good’ microbes feast on fiber and variety

Eating a wide variety of fiber-rich plants and nutrient-dense foods seems to be especially beneficial, said Tim Spector, a professor of genetic epidemiology at King’s College London and the founder of the British Gut Project, a crowdsourced effort to map thousands of individual microbiomes.

Even if you already eat a lot of fruits and vegetables, Spector advises increasing the variety of plant foods you eat each week. One fast way to do this is to start using more herbs and spices. You can use a variety of leafy greens rather than one type of lettuce for your salads. Adding a variety of fruits to your breakfast, adding several different vegetables to your stir fry and eating more nuts, seeds, beans and grains is good for your microbiome.

These plant foods contain soluble fiber that passes through much of your gastrointestinal tract largely unaffected until it reaches the large intestine. There, gut microbes feast on it, metabolizing and converting the fiber into beneficial compounds such as short chain fatty acids, which can lower inflammation and help to regulate your appetite and blood sugar levels.

In one study scientists followed more than 1,600 people for about a decade. They found that people who had the highest levels of microbial diversity also consumed higher levels of fiber. And they even gained less weight over the 10-year study, which was published in the International Journal of Obesity.

Another important measure of gut health is a person’s ratio of beneficial microbes to potentially harmful ones. In a study of 1,1oo people in the United States and Britain published last year in Nature Medicine, Spector and a team of scientists at Harvard, Stanford and other universities identified clusters of “good” gut microbes that protected people against cardiovascular disease, obesity and diabetes. They also identified clusters of “bad” microbes that promoted inflammation, heart disease and poor metabolic health.

While it’s clear that eating lots of fiber is good for your microbiome, research shows that eating the wrong foods can tip the balance in your gut in favor of disease-promoting microbes.

The Nature study found that “bad” microbes were more common in people who ate a lot of highly processed foods that are low in fiber and high in additives such as sugar, salt and artificial ingredients. This includes soft drinks, white bread and white pasta, processed meats, and packaged snacks like cookies, candy bars and potato chips.

The findings were based on an ongoing project called the Zoe Predict Study, the largest personalized nutrition study in the world. It’s led by a health science company that Spector and his colleagues created called Zoe, which allows consumers to have their microbiomes analyzed for a fee.

Once you start increasing the variety of plant foods you eat every day, set a goal of trying to eat around 30 different plant foods a week, says Spector. That might sound like a lot, but you’re probably already eating a lot of these foods already.

The sample menu shows how in just three meals over the course of the week you can easily eat 30 different plant foods.

Another way to nourish your gut microbiota is by eating fermented foods like yogurt, kimchi, sauerkraut, kombucha and kefir. The microbes in fermented foods, known as probiotics, produce vitamins, hormones and other nutrients. When you consume them, they can increase your gut microbiome diversity and boost your immune health, said Maria Marco, a professor of food science and technology who studies microbes and gut health at the University of California, Davis.

In a study published last year in the journal Cell, researchers at Stanford found that when they assigned people to eat fermented foods every day over a 10-week period, it increased their gut microbial diversity and lowered their levels of inflammation.

“We’re increasingly developing a very rich understanding of why microbes are so good for us,” said Marco.