by John Timmer: It’s often cheaper to build and run solar than to buy gas for an existing plant… 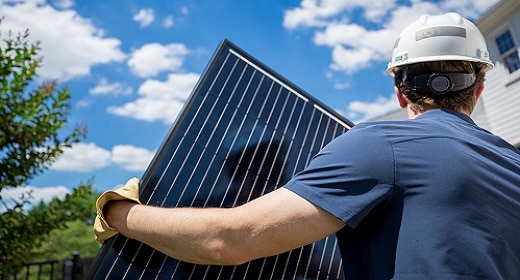 This week, the US Department of Energy’s Berkeley Lab released its annual analysis of solar energy in the US. It found that nearly half the generating capacity was installed in the US during 2021 and is poised to dominate future installs. That’s in part because costs have dropped by more than 75 percent since 2010; it’s now often cheaper to build and operate a solar plant than it is to simply buy fuel for an existing natural gas plant.

The analysis was performed before the passage of the Inflation Reduction Act, which contains many incentives and tax breaks that should expand solar’s advantages in the coming years.

Solar, by the numbers

In terms of large, utility-scale solar installs, the US added over 12.5 gigawatts of new capacity last year, bringing the total installed capacity to over 50 gigawatts. Texas led the way, with about a third of the total capacity added (3.9 GW) going online in the Lone Star State. Combined with residential and other distributed solar installations, solar alone accounted for 45 percent of the new generating capacity added to the grid last year.

Solar’s expansion has largely been driven by falling costs. The DOE estimates that the price of building a solar plant has been dropping by an average of about 10 percent a year, leading to a fall of over 75 percent since 2010. That has left prices averaging about $1.35 for each watt of capacity in 2021. Large-scale plants benefit the most, with projects over 50 megawatts costing about 20 percent less than those under 20 MW.

The drop in prices is causing some somewhat odd trends, driven by the fact that it’s becoming increasingly economical to install large facilities in states that don’t get as much sun, like Maine, Michigan, and Wisconsin. As a result, the past several years have seen the average incoming energy at newly constructed facilities (measured as daily kilowatt-hours per square meter) drop by about 20 percent.

That has helped cause a large spread in what’s called the capacity factor, which is calculated by dividing the amount of energy produced at a facility by the maximum energy it could have generated if it produced 24 hours a day. The median capacity factor of solar plants in the US was 24 percent, but outliers were as low as 9 percent and as high as 35 percent. As prices continue to fall, this spread may become more pronounced, with more plants at the low end of the range.

In parallel with the drop in construction costs, the cost of electricity generated by solar farms has been dropping as well. The new analysis has tracked this via both the cost of power purchase agreements and the levelized cost of electricity (LCOE), the latter being a measure that compensates for the benefits of tax incentives to provide a more direct measure of how much a method of generation costs.

Both of these are dropping. The LCOE has plunged even faster than the cost of construction, dropping 16 percent annually since 2010, for a total drop of 85 percent. In concrete figures, the LCOE of solar was about $230 per megawatt-hour in 2010; it’s now $33 per MWh. If the tax incentives are included, it drops further to $27 per MWh.

(An aside about those tax breaks. Before the passage of the Inflation Reduction Act, the only way to get a tax break on a battery installation was to pair it with a renewable generating facility in what’s termed a hybrid power plant. As a result, over a quarter of the installed solar capacity was part of a hybrid power plant. Collectively, those facilities brought 6.9 GWh of battery storage online last year. With batteries getting tax incentives of their own, that trend may end up being short-lived.)

In the western US, where solar productivity is highest, most power purchase agreements are going for even less than the LCOE, with most priced in the area of $20 per MWh. Elsewhere in the US, they’re typically in the $30-40 range. By this measure, that means solar is now competitive with wind in many areas of the US—exactly which of the two is cheapest will depend on the wind and solar resources at a site.

But the most striking thing about this figure is that the DOE says it’s competitive with “the cost of burning fuel in existing gas-fired generators.” In other words, it can potentially be more economical to not operate an existing gas generator and use the money you’d spend on fuel to install a solar farm instead.

Given those numbers, it should not surprise you that the DOE sees a lot of solar in our future. It’s projecting that annual installs (both utility-scale and distributed) will more than triple by the end of the decade, reaching about 75 GW in 2030, and continuing to grow from there. And it notes that its analysis was based on data prior to the passage of the Inflation Reduction Act, “which is likely to stimulate significant additional deployment.” The report also looks at potential solar installs that are in the planning stage, based on requests for connection to the grid. While many of these will never get past the planning stage, there are a lot of them—nearly 700 GW at the end of 2021. By contrast, wind is at about 200 GW, and natural gas 100 GW. All other generating sources are negligible.

Even if only a fraction of that is ultimately built, it’s likely to dramatically change the grid. Increasingly, non-solar generating capacity is going to be forced off the grid at mid-day on sunny days, and the value of solar itself will drop in some areas as generation starts to regularly exceed demand. This will make batteries (both personal and grid-scale), which can charge up during this excess, more valuable while dropping the value of rooftop solar. And these changes are likely to be felt before the decade is out.