by Donna Quesada: Out of the Negative Mind— 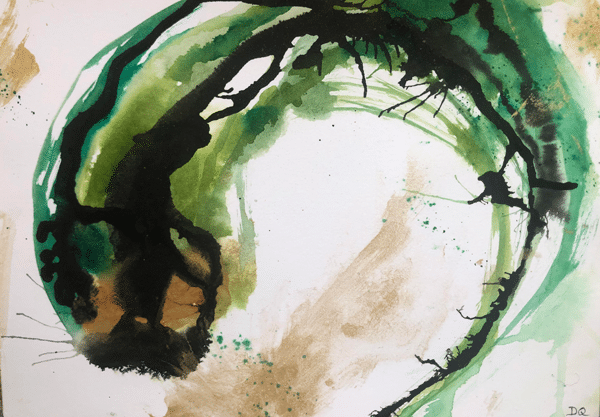 Why didn’t she invite me to the get-together?… She’s excluding me.

Why would he make that comment? … He’s trying to control me.

My mother always held me back as a kid … She didn’t want me to succeed.

These kinds of thoughts are always part of the default record playing through the ruminating mind, as my Zen teacher used to call it. Some call it the ego. A rabbi friend calls it “the program.” He never really provided a working definition of it, but if all the fears, insecurities, doubts and paranoia running through our system got all twisted up together, put in a mixer and then got squeezed out like a sausage, that would be the program. Only… it chatters, non-stop, like a hyper toddler.

Its only antidote is awareness.

In Yoga, the program would be considered part of the negative mind—our default channel. The others are the positive and neutral minds. But it takes more effort to get those channels to work properly. While it might be tempting to say that the positive mind is the preferred state of being, in reality the desired state is the neutral mind. This is what is meant by awareness.

Why is it so challenging to get out of the default negative program? And why does that have to be “the default?” According to some theories in psychology, it is because holding on is easier than letting go. In other words, holding on to negative thoughts and experiences, such as those mentioned at the top of the article, is easier than telling a different story or even better… no story at all.

–  Because sometimes we hold on due to the fact that whatever it was, it was too much for us, and so we suppress the emotions involved, whether that event was simply a comment that someone made, or a physical act of abuse… We don’t process it properly and so we never really move on. In this vein, holding on is a self-protection mechanism.

–  Because sometimes, rather than the inward trajectory of suppression, the self-protection mechanism and paranoia takes the outwardly-directed form of blame. And now the old story has become our identity. We get sympathy from telling our story. It’s the victim’s gold-plated glory.

–  Because we want to toil with it. It’s as if we actually enjoy the old story… we want to somehow shape it into a more satisfying conclusion… we want to make sense out of it… Just like in movies, we want a problem to wrestle with, to gnaw on, like a dog with a bone. We want to work it out. After all, that’s the ego’s job description—it solves problems. It’s what it does. It’s “the fixer.” So, it will create a problem, if none exist.

Thus, the self-protection mechanism, in whatever form it takes, continues on.

Either way, we all got used to protecting ourselves at a very young age, when we lacked  better coping “tools” (and our parents and teachers likely lacked them, too), and editing our stories takes practice. Processing our emotions takes even more work.

This is where Yoga, prayer, meditation and nature come in—to remind us who we really are. That we are not the ego, that we are not “the program.” We are not the fear or the envy or the paranoia. We see the good because God sees the good. We are God. So, we see and feel as He/She does. We forgive as He/She does. We lead with the heart because that is where God lives. The heart doesn’t think those negative things. The heart just is… right here, right now. And so, in coming into the heart space, all of the anguish vanishes, just like that.

This was always the purpose of religion… to reconnect us with who we really are. Because we forget. And historically, religion (literally “to connect to God”) took many forms, including the veneration and celebration of nature. It was not always an oppressive, institutionalized giant obsessed with rituals, trite notions of confession and the forbidding of premarital sex. It was simply the name given to any practice which brought you into a state of connection… It’s the meaning of Yoga, too—to connect. To become one with the divinity that lies within. The true meaning of holy… to become whole.

Namaste; The Divine Within—

In short… How does realizing who I really am beneath the program, heal me?

Because the heart doesn’t try to understand the “WHYS.”

It doesn’t try to make sense out of it or resolve it.

It doesn’t concern itself with the story.

And so… How do we get to the essence of who I really am? What is the right way? Is there a right way?

There are as many right ways as there are ways of being broken. A walk through nature can be as powerful as a walk through the church doors. Singing is as therapeutic as painting is for a painter, or surfing for a surfer. Because these things silence the chatter in the mind and bring us back into the body, and thus, into the here and now.

But, just to push into this a little bit more… is there a common denominator?

I think there is, and it comes down to the feeling of acceptance that lies within the heart, and the simultaneous release of any opposition to whatever the present moment offers.

In Taoism, it’s found in the application of wu wei — non-resistance. In Christian prayer, it’s found in the act of surrender to Christ. The Law of Attraction calls it alignment. No matter what we call it or what tradition we find it in, it’s the body, heart and spirit saying YES AND THANK YOU to the universe. The true meaning of the bow.

What does that look like to you? Laughter? Tears? Dancing? Whatever works…

“It’s nothing but a single word: Yes! … ‘I accept whatever you give, and I give whatever you take.’” ~Mother Teresa