Arnold Schwarzenegger: I’ve Given Up Meat For The Benefit Of Humanity

by Sean Adl-Tabatabai: Terminator star and former governor of California Arnold Schwarzenegger has urged members of the public 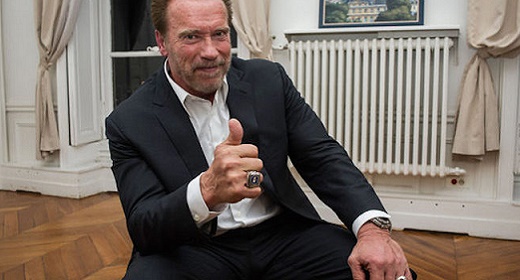 to give up meat and take-up a plant-based diet “for the benefit of humanity”. In partnership with James Cameron, Arnie is spreading the message, “less meat, less heat, more life”.

Recently, Arnold Schwarzenegger partnered with the Wild Conservation Society to raise awareness about the issue of poaching. In that video, he made it clear that poachers will pay for their crimes against humanity as killing African Elephants for their tusks is likely to result in their demise within the next decade.

Now, the former bodybuilder, governor of California, and actor has teamed up with James Cameron, director of Avatar and advocate for the vegan lifestyle, and both have a powerful message to share with the world. Terminator star and former governor of California Arnold Schwarzenegger has urged members of the public to give up meat and take-up a plant-based diet “for the benefit of humanity”.

In the video below, it is explained that animal agriculture is responsible for 18 percent of greenhouse gas emissions, more than the combined exhaust from all transportation. The duo lends support for China’s new directive which urges citizens to cut down on meat consumption to prevent diseases of affluence, such as heart disease and diabetes.

The staunch environmentalists tell the camera:

According to the documentary Cowspiracy, livestock and their byproducts account for at least 32,000 million tons of carbon dioxide (CO2) per year, or 51% of all worldwide greenhouse gas emissions. By utilizing land to grow crops that feed humans rather than cows, world hunger can be managed and the large amounts of methane produced by the livestock (which is 25-100 times more destructive than CO2 on a 20-year time frame) will be lessened.

It all begins with the little choices you make. Thankfully, eating healthy, plant-based food is easier now more than ever. Whether you purchase veggie burgers at the store or opt to make your own, there are a variety of ways you can please your palate while helping the planet.

“You have to start slowly, you can’t just convince people to stop eating meat altogether. It’s a very big challenge, it doesn’t mean it shouldn’t be done and you shouldn’t be on that campaign, but it’s a very hard thing to overcome.”