5 Daily Servings Of Fruits And Vegetables Can Help You Live Longer, Study Finds

by Korin Miller: It’s hardly shocking to hear that you should eat plenty of fruits and vegetables, but a new study is breaking down exactly how many you need of each to live longer… 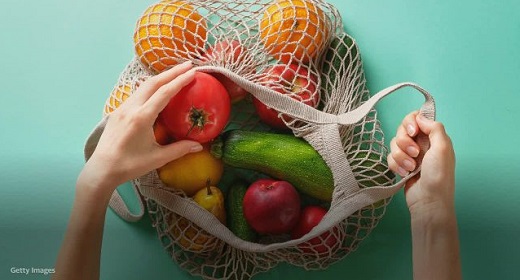 The study, which was published in the journal Circulation, analyzed data from 66,719 women from the Nurses’ Health Study and 42,016 men from the Health Professionals Follow-Up Study and compared it with information on fruit and vegetable intake and death from 26 studies. After analyzing the data, the researchers found that having five servings of fruits and vegetables a day was linked to a longer life span.

Not all fruits and vegetables are created equal, based on the findings. The researchers discovered that starchy vegetables like peas, corn and potatoes were not linked with a longer lifespan. Fruit juice also doesn’t count, per the study.

Spinach, lettuce, kale and carrots are considered good options for vegetables, while berries and citrus fruits got high marks in the fruit department.

Currently, the American Heart Association recommends having four servings of fruit a day and five servings of vegetables a day. A serving can include a medium piece of fruit, a 1/2 cup of fresh or frozen fruits or vegetables and a cup of raw leafy vegetables.

Scott Keatley, a registered dietitian at Keatley MNT tells Yahoo Life that he’s “not surprised at all” by the findings, given that they largely support current recommendations. He does include a few caveats, though. “This data relies on people telling the researchers accurate and truthful information — which sometimes people do not,” he says. “Also, keep in mind that at baseline people who ate more vegetables tended to exercise more, drink less alcohol and don’t smoke. These are huge factors.”

Rena Zelig, registered dietitian nutritionist and director of the Masters of Science in Clinical Nutrition program at Rutgers University, tells Yahoo Life that the study’s findings are “very consistent” with the advice most dietitians currently give. “Both fruits and vegetables are very good for you. They are filled with vitamins, minerals and fiber, and thus have many health benefits,” Zelig says.

So, why do the recommendations lean more heavily toward vegetables than fruits? A lot of it comes down to calories, Keatley says. “One of the biggest predictors of developing a chronic health condition is excess visceral fat,” he explains. “Fruit, generally speaking, has more calories than vegetables and, over time, having more vegetables will allow you to get full with fewer calories.”

“Vegetables also tend to be more nutrient-dense than fruit — more nutrients, fewer calories — and are especially high in nutrients that many people miss out on, like folate, iron, magnesium, calcium and potassium,” Mary Cochran, a registered dietitian with the Ohio State University Wexner Medical Center, tells Yahoo Life. “It would make sense that if people eat more vegetables, they are getting a higher concentration of these important nutrients, which could lead to improved health outcomes.”

Vegetables also “tend to have more fiber and less sugar” than fruits, registered dietitian Sonya Angelone, a spokeswoman for the Academy of Nutrition and Dietetics, tells Yahoo Life. “They also tend to have certain compounds that promote health,” she says. “Plus, fiber feeds the good gut bacteria that produce more compounds to improve health and reduce risk for disease.”

But why were potatoes, peas and corn called out? That’s also not shocking to nutrition experts. ”Potatoes, peas, and corn are known to be starchier vegetables,” Zelig says. These vegetables also have more calories than their counterparts, Keatley says. “They all can be part of a healthy diet but, when comparing, say, spinach, which has seven calories per cup to peas, which have 118 … there is no competition,” he says. “Keeping calories in line with what is necessary for your body and workload is the No.1 thing you can do to maintain your health long-term.”

To get more fruits and vegetables in your diet, Zelig recommends building your dishes around them. “I love to tell my patients to build their meal around a salad,” she says. “You can be so creative with it, and can add your protein—chicken, meat, fish, beans, nuts and cheese — and even carbohydrates in the form of whole grains, while making the vegetables the star.”

Since cleaning and prepping produce can be a chore, Angelone suggests buying pre-chopped items when you can, like broccoli florets. You can also try to slip vegetables like spinach or kale into soups and sauces to increase your intake, she says. “Small changes are easier to maintain than more drastic changes,” she says.

Keeping produce out and visible is also important. “If you’ve got a fruit and veggie bowl with things you can munch on when you’re hungry, you’re far less likely to go to the cupboard and get a super-processed snack,” Keatley says. You can even reframe your appetizers and desserts to center around fruits and vegetables. Keatley suggests getting in the habit of having a crudité platter or vegetables as an appetizer and fruit with your dessert.

As a whole, Zelig says most people can see a big change when they incorporate more fruits and vegetables into their diet. “Fruits and vegetables are generally lower in calories and higher in nutrients than other foods,” she says. “Using more of them can change the whole profile of your diet for the better.”