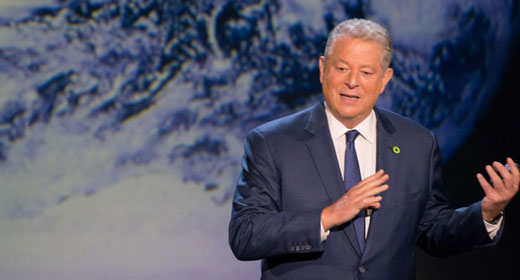 Others take up oil painting. But according to a new documentary starring former Vice President Al Gore, An Inconvenient Sequel: Speaking Truth to Power, the retired politician, and 2007 Nobel Peace Prize winner, has spent his golden years talking about global warming.

The film, directed by Bonni Cohen and Jon Shenk, is a follow-up to 2006’s Oscar-winning An Inconvenient Truth. When Truth premiered, it permeated the culture and shifted the national conversation. Gore, who has devoted the past 30 years to discussing climate change, became a polarizing figure. Despite the controversy surrounding the film, a Nielsen/Oxford University poll found that 66 percent of people who watched the documentary said it changed their minds about the existence of climate change.

There have also been notable successes since 2006. The issue is increasingly becoming bipartisan. Clean energy has now become cost competitive, and a handful of towns across the United States have switched entirely to renewables. In 2015, at the United Nations Climate Change Conference in Paris, 175 world leaders agreed to try to keep temperatures from rising more than 2 degrees Celsius above preindustrial levels. But despite these efforts, global carbon dioxide levels continue to increase, and as of 2016, 81 percent of all energy produced in the world is based on carbon fuels.

While Truth was organized around Gore’s famously wonky slide show, Sequel, plays like more of a character portrait of the former Vice President as he monitors the effects of global warming on the ground, and devotes his energy to pushing awareness of climate change forward internationally. In Greenland, we see him meet with scientists who explain how melting ice sheets lead to rising sea levels. In Miami Beach, Florida, he wades through flooded streets and speaks with local politicians about their attempts to save the city from going under water in a state where the governor has banned the term “climate change.” In the Philippines, he speaks to typhoon survivors about terrifying personal experiences.

The film, which will be released July 28, comes at a time when the Trump administration has still not fully acknowledged the effects of global warming. But Gore says this is just another challenge in a long list of obstacles, and he refuses to be deterred from spreading his message, highlighted below.

In 2006, Gore’s warnings about rising sea levels were dismissed as ridiculous, but by 2017 he was proven right.

When Gore first suggested, in 2006, that lower Manhattan would eventually flood, he was ridiculed, and became a punch line for climate deniers. But now, following 2012’s Super Storm Sandy, and the flooding of the World Trade Center memorial, it’s clear Gore’s warnings were accurate.

The potential impacts of climate change are increasingly serious.

According to the latest data, 2016 was one of the warmest years on record, and record-breaking days have increased by 150 percent in the last 30 years. Meanwhile extreme weather — like flooding, droughts, wildfires, and hurricanes are also common. Biodiversity is at great risk, and an estimated 25 percent of land species are in danger of becoming extinct by 2050. A loss of biodiversity, reduces natural balances, which scientists think may lead to the spread of diseases like the Zika virus.

In the film, Gore travels alongside Dr. Konrad Steffen where he witnesses Greenland’s ice sheets disappearing and developing holes like “Swiss cheese.” Scientists predict arctic summers may soon be ice free, and sea levels could rise as much as seven feet in coming years.

Climate change is a major threat to the world economy and international stability.

Experts surveyed before 2017 World Economic Forum in Davos called a catastrophe created by global warming the greatest threat to the world economy. In 2015, according to the UN, approximately 15 million people were forced to leave their homes due to weather damage. This may have impacted the international refugee crisis, and political instability in Europe. The current conflict in Syria was preceded by the worst drought in 900 years, which destroyed 60 percent of farms and 80 percent of livestock, drove 1.5 million more people into cities, and may have led to increased civil unrest.

To fix the climate crisis, we have to fix the democracy crisis.

Gore may be a “recovering politician trying not to relapse,” but he still thinks like a lawmaker. He continues to argue that big corporations have “hacked” the political system and are obstructing progress on climate change. Gore also recognizes that to succeed in reducing carbon emissions globally, we must navigate the politics of the developing world. In the film, we see Gore meet with Indian politicians, and we hear their concerns about switching to clean energy. And at the 2015 United Nations Climate Change Conference in Paris, we watch as he helps negotiate a back channel deal that would encourage India to embrace solar energy and move away from fossil fuels.

A sustainable energy revolution is here.

In 2016, major investments were made in solar, wind, battery and electric vehicles, and financiers continued to see the economic potential of moving away from fossil fuels. The cost of solar has dropped by 85 percent in 10 years, and solar installations have increased exponentially, particularly in developing countries.

This movement has faced many obstacles, and Donald Trump is just one more.

Although Gore naturally supported Hillary Clinton’s presidential bid, he has said Trump is just another hurdle that can be overcome. At the Sundance Film Festival, Gore reiterated his optimism: “The will to act itself is a renewable resource,” he said. “No one person can stop this progress.”