by Adele Peters: In Myanmar, a major project is under way: restore coastal mangrove forests—with a little air support… 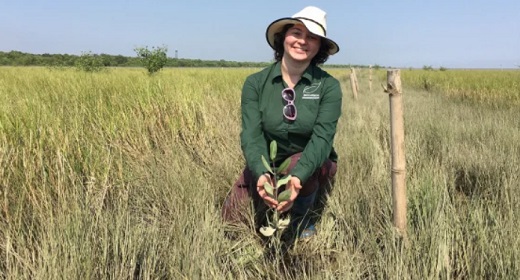 In a remote field south of Yangon, Myanmar, tiny mangrove saplings are now roughly 20 inches tall. Last September, the trees were planted by drones. It’s early proof of technology that could help restore forests at the pace needed to fight climate change.

“We now have a case confirmed of what species we can plant and in what conditions,” says Irina Fedorenko, cofounder of Biocarbon Engineering, the startup that makes the drones. The right combination of species and specific environmental conditions made the restoration work. “We are now ready to scale up our planting and replicate this success.”

The startup, which also uses drones to plant trees and grasses at abandoned mines in Australia and on sites in other parts of the world, is working with a nonprofit in Myanmar called Worldview International Foundation. To date, the nonprofit has worked with villagers to plant trees by hand. The project began in 2012, after the government began opening the country’s borders to international business. More than six million trees have been planted so far, and the nonprofit plans to plant another four million by the end of 2019. But it also recognizes that humans can’t easily cover the amount of land that could potentially be restored.

Within three states, roughly 350,000 hectares of coastal forest needs to be restored—an area nearly as large as Rhode Island. With about 5,000 trees able to grow in a hectare, that works out to more than a billion trees. “Obviously, planting a billion trees will take a long time without the help of drones,” says Bremley Lyngdoh, founder and CEO of Worldview Impact, a separate nonprofit partnering with the Worldview International Foundation on its work in Myanmar. Two operators working with 10 drones can theoretically plant 400,000 trees in a day.

The drones first fly over an area to map it, collecting data about the topography and soil condition that can be combined with satellite data and analyzed to determine the best locations to plant each seed. Then the drone fires biodegradable pods—filled with a germinated seed and nutrients—into the ground. For the process to succeed in a mangrove forest, several conditions need to be right; if the tide comes in unexpectedly, for example, the seeds could wash away. In tests, Biocarbon Engineering has looked at which species and environmental conditions perform best.

If drones do begin to replant entire forests, humans will still play a critical role. That’s in part because some seeds don’t fit inside the pods. But people living nearby also need a reason to leave the trees standing. “The project in Myanmar is all about community development and enabling people to care for trees, providing them with jobs, and making environmental restoration in a way that it’s profitable for people,” says Fedorenko. “The forest didn’t vanish by itself—the forest was cut down by local people.”

Roughly half of the world’s mangrove forests have been lost. The trees, with twisted roots that reach underwater along coastlines, can store more carbon than trees on land. Mangrove deforestation is responsible for 24 million tons of CO2 emissions each year, according to a 2018 study. They also provide a barrier in storms; when a cyclone hit Myanmar in 2008, killing more than 100,000 people, the impact was also worse because there weren’t as many trees left. Some trees are cut down to make way for aquaculture (ironically, because fish stocks drop dramatically when the trees disappear). The wood is also used to make charcoal.

In Myanmar, Worldview International Foundation works closely with communities to help provide new economic opportunities. People who previously made money making charcoal, for example, are now employed as mangrove planters. They’re also learning how to run aquaculture businesses within mangrove forests. “We have to incentivize people,” says Lyngdoh. “It’s all about creating livelihoods. We have to create jobs that are long-term that can sustain the family, then they see the benefit of the project, and they get engaged in the long term.”

The trees can also earn revenue through carbon credits. Worldview International Foundation’s work has been validated so that it can sell carbon offsets to companies; that money comes back to the community and keeps the work going. Biocarbon Engineering is now talking with brands that want to sponsor tree planting, so that when consumers make a purchase, a tree is planted. The drones could share data about specific trees with consumers. “We can literally see every single tree and the leaves on the tree if we need to,” she says. “It opens up this new market for people to see the connection with trees and to say, ‘Wow, this is my tree. I planted that.’”

Worldview International Foundation also works with farmers in India to restore forests in mountains, and in Sri Lanka. Lyngdoh is interested in working with Biocarbon Engineering to bring the drones to those areas as well after proving that the process can work at a larger scale in Myanmar. Ultimately, drones could help support much more massive tree planting, which would have a significant impact on climate change: researchers recently calculated that there is enough room to plant another 1.2 trillion trees, which could suck up more carbon each year than humans emit.