by Hannah Sparks: For centenarian Julia “Hurricane” Hawkins, age is nothing but a number — and a goal racing distance… 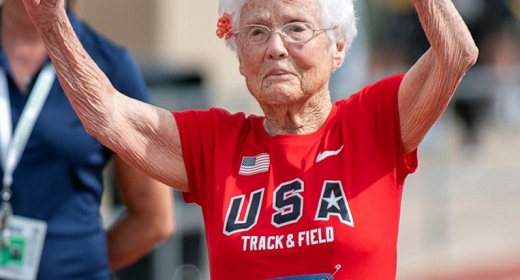 During the National Senior Games this week, Louisiana-based Hawkins, who is 103-years-young, took home the gold for the 100-meter dash, completing the course in just 46.07 seconds.

Her remarkable fitness journey started just two years ago, when she first became a world record holder for the 100-plus age group in the 100-meter dash, finishing then in just under 40 seconds.

“I thought it would be neat to run at 100 and do the 100-yard dash,” Hawkins told KRQE News13, in Albuquerque, N.M., where the annual competition is still ongoing.

Prior to Tuesday’s 100-meter dash, the former school teacher raced 50 meters on Monday and set another Senior Games record for women over 100, with a time of 21.06.

Hawkins said she only started running competitively after turning 100. Her training mostly involves working outside in her garden.

“I have an acre of land and I have 50 kinds of trees and I’m working on them all the time,” she said.

She also said that her intimidating nickname “Hurricane” was dubbed by a friend, but the green-thumbed runner would have gone with something a bit more genial.

“I like the ‘flower lady’ better,” said Hawkins, with a bud tucked behind her ear.

Along with Monday’s record, Hawkins is also the oldest woman to ever compete on an American track.

“I hope I’m inspiring them to be healthy and realize you can still be doing it at this kind of an age,” said a proud Hawkins. “Everyday when you’re 103 is a miracle.”