Vegan And Meat-Free Fast-Food Options Are Growing. Here’s Where To Find Them.

by Kelly Tyko:Plant-based protein continues to go more mainstream, making it easier to maintain a vegan or meat-free lifestyle… 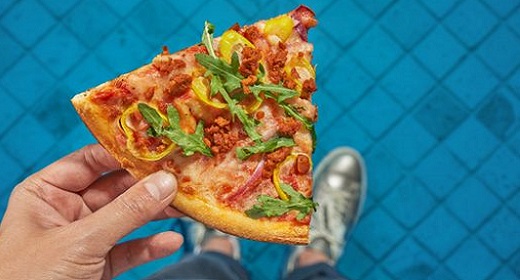 Two weeks after Red Robin became the largest restaurant chain to serve The Impossible Burger and Burger King announced the pilot of the Impossible Whopper in St. Louis, two more restaurants announced Monday that they are joining the growing plant-based foods movement.

In an exclusive interview with USA TODAY, Del Taco President and CEO John Cappasola said the California-based company partnered with Beyond Meat to develop the protein that includes the restaurant’s signature seasoning.

“It provides vegans and vegetarians or anyone wanting to cut down red meat consumption with more variety and convenience than they have today,” Cappasola said. “You can have a taco experience without feeling like you’re sacrificing.”

Chipotle Mexican Grill is considered the first major chain to offer a vegan option when in 2014 it introduced its Sofritas, a spicy, shredded, organic tofu, to restaurants nationwide.

Last year, KFC announced it was testing a vegetarian equivalent of its famous chicken in the company’s units in the United Kingdom and Ireland.

In January, Carl’s Jr. added the plant-based Beyond Burger to its menu and Taco Bell announced it would test a dedicated vegetarian menu, new menu items and in-restaurant menu boards to make it “even easier and better for vegetarians and flexitarians.”

Del Taco partnered with El Segundo, California-based Beyond Meat, while Blaze Pizza partnered with an unnamed third-party supplier to develop the new products.

“I wanted to create a vegan topping that pizza lovers would enjoy regardless of their dietary preferences,” Blaze Executive Chef Brad Kent said. “Since there wasn’t anything on the market that was flavorful or spicy enough for us, I started developing the recipe by bringing in over 20 different chilies and other spices.”

The chorizo was tested in several restaurants earlier this year, Kent said.

“We knew we had a hit on our hands when meat-eating guests, and team members, started ordering it as the stand-alone protein on their pizzas,” he said.

Del Taco tested its new Beyond Taco and Beyond Avocado Taco in Southern California and Oklahoma locations and saw “tremendous consumer demand that drove increases in our sales and our traffic,” Cappasola said.

The two tacos contain the Beyond Meat but the Beyond Avocado is the “completely vegan product,” Cappasola said, because it has a slice of avocado instead of cheese.

The tacos will cost $2.49 each and customers with the Del Taco app can try one for free starting April 25 when they enter promo code “Beyond” into the app. No purchase necessary and the offer is valid for seven days at participating restaurants.

The demand for plant-based products is growing as more people want to reduce meat consumption because of health concerns, said Ethan Brown, Beyond Meat’s founder and CEO.

“We are about accessibility and meeting people where they’re at in their journey – whether you’re a hardcore carnivore or a strict vegan, you should be able to have our tacos, enjoy what you’re eating and feel great afterward,” Brown said.

Plant-based foods not just a trend

To Michele Simon, executive director of the Plant Based Foods Association, the growth of plant-based products in restaurants and stores isn’t a trend, but a movement.

“We’re talking of a mainstreaming of this way of eating,” Simon said, adding meat and dairy alternatives are growing in popularity. “You can’t get more mainstream than Burger King and Carl’s Jr.”

That has led some to question when McDonald’s will announce plans for a meatless burger in the U.S.

The global fast-food giant already has vegan burgers in other countries, including the McVegan, which it added to menus in Sweden and Finland in 2017, and the McAloo Tikki from India. The Indian veggie burger was available in November as part of a rotating menu at McDonald’s global headquarters restaurant in Chicago.

Author Kathy Freston, who started the petition, updated it after Burger King’s announcement. She wrote on April 10: “As 160,000-plus consumers strong, let’s turn up the pressure on McDonald’s by telling them that if Burger King can do it, a meatless burger is no longer ‘impossible.'”

When asked if McDonald’s had any plans to add a vegan burger or a comment on the petition, McDonald’s spokeswoman Andrea Abate said that the company didn’t have a comment.

Simon thinks it’s a matter of time before McDonald’s and competitors expand their menus.

“Major fast-food chains are realizing that they have to respond to this growing consumer demand,” she said.