by Shelby Stanger: How the Vista-based company’s age-old recipe has innovated the business of getting clean… 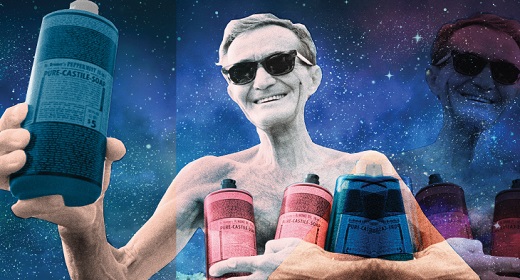 Dr. Bronner’s south Vista headquarters is reminiscent of Willy Wonka’s factory. There’s bright pastel tanks of soap; tanks with organic and fair-trade olive, coconut, and hemp oil from farms the Bronners work with directly; smiling people running swift bottle-filling machines; and rolls of bright, beautiful colored labels in different languages that’ll accompany scented soaps around the world. Out front is a fire truck converted to run on biodiesel, now used for spraying crowds with soapy foam at special events across the country, and two ladies from the Magic Foam Experience team who greet visitors by dancing to Michael Jackson’s “Thriller.”

“We are all about fun,” says Michael Bronner, grandson of Dr. Emanuel Bronner, who was a third-generation soapmaker himself when he founded the company in 1948. “We spread ‘one love’ and fun, and soap is just the delivery mechanism.”

This may be a lofty statement, even coming from a company with 60 percent of the natural soap market, but the namesake Dr. Bronner was a lofty and eccentric guy, too. His vision has lived on through his family, including grandsons Michael and David, the company president and CEO, respectively, who have helped take the business from 15 employees in 2000 to more than 190 today.

Emanuel Heilbronner grew up in a Jewish soapmaking family in Germany—his grandparents are said to have invented the first liquid castile soap in the late 1800s. He received a master soapmaking certificate in his teen years and emigrated to the United States in 1929. During the rise of the Third Reich, he dropped “heil” from his last name and urged his family to follow. Underestimating the threat, his parents stayed, and were deported and later killed at Auschwitz and Theresienstadt.

In the early 1940s, Emanuel received a letter from his father in which all the words were blacked out except for one line: “You were right.” The pain of losing his family and the conviction that the world had to change led Emanuel to begin preaching his theories about achieving unity regardless of racial, ethnic, or gender divides. He added “Dr.” to his name, and with his thick German accent and vast experience advising soap and chemical manufacturers, no one contested it.

Preaching on a Soapbox

Dr. Bronner started preaching by literally standing on a soapbox, lecturing to anyone who would listen about his “Moral ABC”—tenets showing that we are all one from the same god, and should work hard and give back to the earth. Every lecture ended with “We are all one or none!”

He first preached on the steps of the University of Chicago, attempting to break down ethnic barriers that he feared would result in nuclear holocaust. In 1945 he was involuntarily committed in a state mental hospital and given shock treatments, an experience so scarring that, decades later, he would blame it for causing his blindness.

The story goes that Dr. Bronner escaped the hospital three times. On the third occasion, he hitchhiked as far as Las Vegas, where he made the mistake of telling his driver where he’d come from and was left behind at a gas station. He then gambled the only money he had, and won enough to make it to Los Angeles.

He began his soapmaking business there in 1948, running it out of his home and giving the product away to those who would listen to his sermons in Pershing Square, which was a hotbed for activism at the time.

Michael says that after a while, Dr. Bronner realized people were coming for the free soap and not staying for the lectures. “So he just started printing his lecture on the labels.”

The Soap That Sells the Label

The text on the label of Dr. Bronner’s liquid castile soap might require a magnifying glass to read. Besides the Moral ABC, the label juxtaposes the names of Abraham, Socrates, Israel, Hillel, Mohammed, Buddha, and Jesus—a bold move today, let alone for a man of that time.

“He trapped people in their showers with his beliefs,” Michael says. Many loved the liquid soap’s minty smell, or found its multiple uses—there are 18 of them printed on the bottle, from preventing insect bites and washing vegetables to substituting for toothpaste—especially helpful during camping trips. Others resonated with the message on the label.

Dr. Bronner was so passionate about this that he sent his three children (two of which would later work for the company) to foster homes while they were growing up, so he could focus on spreading his message. “While he was an amazing advocate for world peace, he was by no means a perfect parent,” Michael says about his grandfather.

Dr. Bronner moved his operation to San Diego in the 1960s, and it became a soap for the era. While he preached his All-One views, saying we are all sisters and brothers of Spaceship Earth (a nod to philosopher Sabine Höhler), the soap traveled far and wide, to Woodstock and beyond. He even went so far as to put his direct phone number on every bottle. It’s something his grandkids always got a kick out of.

PASSING THE SUDSY TORCH: Dr. Bronner’s sons, Ralph and Jim, took over the company with Jim’s wife, Trudy, after Dr. Bronner died in 1997. Ralph and Jim have since passed as well, and now Trudy and her sons, Michael and David, carry on the soapmaking tradition.

The Soap Went Viral before the Internet

Michael recalls that some of his earliest memories are of watching his grandfather, surrounded by red rotary phones, talking to individual customers who would call in. “Some called for inspiration; others called because they thought it was funny, but he would talk to them for hours on end all the same. My grandpa’s telephone was his Twitter and Facebook accounts in one.”

Dr. Bronner often recorded his talks. The company recently compiled 400 of them from 1968 to 1983 onto a record, and had a release party at Music Box in downtown San Diego, complete with Dr. Bronner’s words remixed with contemporary music and organic food served on album-cover plates. Proceeds from the concert went to Jail Guitar Doors, a nonprofit that provides guitars to prisoners.

Ahead of the Eco-Friendly Curve

“We were green before it was even cool,” Michael says. His company recently became an official benefit corporation, giving away almost seven percent of its revenue every year—or more than one-third of profits—to environmentally friendly causes, charities, and lobbyists.

The brand pioneered the use of 100-percent post-consumer recycled bottles, and in 2003 became the largest personal care company certified under the U.S. Department of Agricuture’s National Organic program. They went even further in 2007, becoming Fair Trade certified.

“Just because you are organic doesn’t mean your supply chain is paid well or treated well, so we wanted to change that,” Michael says. The company has also put millions of dollars toward GMO labeling legislation, caps their own executive salary at only five times that of the lowest-paid worker, and is still fighting for an increase to the minimum wage.

Dr. Bronner’s works with hundreds of charities around the county; they sponsor the Moonlight Amphitheater in Vista, the Escondido Children’s Museum, and the Boys and Girls Club; and they bring their fire truck to foam people at mud runs, schools, and festivals all over Southern California.

As for the workplace culture, it doesn’t take a stretch of the imagination to guess that it’s fairly young, progressive, and eclectic. Around half the employees are Mexican; free lunches are catered by the plant-based restaurant Café Gratitude every week, and they proudly boast the biggest costume department of any soap company in the world.

The soap itself hasn’t changed much. Michael says it’s roughly the same recipe his ancestors developed in the 1880s by reacting coconut or olive oil with alkali. “While you can make soap from any oil, we use coconut oil for its copious lather, olive for its soft and smooth lather, and hemp and jojoba for the soft after-feel,” Michael explains, adding that their liquid soaps are more concentrated than any other on the market.

The company really started to take off when the grandsons got more involved, and in the early aughts when Trader Joe’s bought into the line. They also started distributing internationally, and later to stores like Urban Outfitters, Costco, and Target, putting them on the map not just for the hippie coast, but mainstream America. The company more than doubled its revenue in five years, going from $42.3 million in 2011 to $103.1 million in 2016.

Dr. Bronner’s is about more than just soap these days. They kept up with the coconut oil trend starting in 2012, at the same time celebrities like Jennifer Anniston and Dr. Oz were promoting it. And although you can actually brush your teeth with their classic soap, the company recently released its own toothpaste, with the tagline “Brushing Your Teeth with Dr. Bronner’s Just Got a Whole Lot Better.”

The soapy foam their biodiesel fire truck sprays at events and schools is the same recipe the Bronner family invented years ago. When it shows up to events, “People get completely taken out of their entire day,” says the driver, Kassidy Jones. “They totally transform, they get excited, and they become totally present.”

It’s something that Dr. Bronner himself aimed to do from day one, something his descendants have endeavored to carry on daily. “Soap is the great equalizer,” Michael says.

HOW CAN ONE SOAP HAVE 18 USES? “It’s simply a time-honored formula made purely from saponified vegetable oils, scented with essential oils,   and preserved with Vitamin E from sunflowers,” says Michael Bronner. “Making such a pure product, without all the complex petrochemical and  synthetic ingredients found in most modern formulations, allows it to be extremely versatile.”