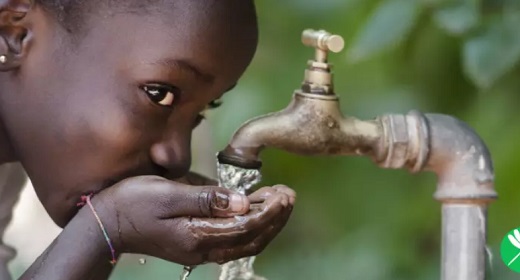 It’s easy to take for granted the fact that in the United States we can turn on a kitchen tap and get clean water. But according to a 2019 UNICEF report, one in three people worldwide do not have access to fresh drinking water. (1)

That adds up to about 2.2 billion people without safely managed drinking water services. For water services to be considered “safely managed”, they must be close at hand, uncontaminated, and available when needed. People in poor and rural communities are most impacted by this issue. (1)

The consequences of lacking access to safe drinking water can be dire. According to the World Health Organization, when safe water, sanitation, and hygiene are scarce, diseases run rampant. These can include cholera, typhoid, and hepatitis A. (1)

Not having water available can also keep girls out of school. Women in developing countries walk an average of 3.7 miles per day to get water for their families. They may carry up to 5 gallons of water every day. This time investment can limit girls’ access to education, as female family members are the ones responsible for getting water in 80% of households that don’t have it on the premises. (2)

One organization is trying to change all of this by building solar-powered freshwater facilities. The GivePower Foundation was originally launched by SolarCity, an offshoot of Tesla. Its goal was to provide solar energy to communities who need it. The foundation has installed solar grids in more than 2,650 locations across 17 countries. Now, GivePower has turned its attention to the problem of clean water. (3, 4)

The founder and president of GivePower, Hayes Barnard, says that the organization began to consider “the most important end uses for human beings that need electricity.” Their answer: water. (5)

GivePower chose to begin its clean water endeavors in Kiunga, Kenya. Kiunga is a community of about 3,500 that sits just south of the Somalian border. It is located along the coast of the Indian Ocean. But despite its proximity to the sea, Kiunga has experienced drought for several years. (6)

Without access to fresh drinking water, Kiunga residents were forced to drink, cook, and clean with water that is contaminated and brackish. This water came from untreated wells. Children often had scars and open wounds from salt left in their clothes after cleaning. The water could carry E. coli, and children were dying from kidney failure due to drinking saltwater. (7)

The solar water farm produces enough fresh, affordable water for 35,000 people every day. GivePower describes it as both scalable and sustainable. (5, 6, 7)

GivePower wants to scale the solution they have found to bring fresh drinking water to more dry coastal communities. They are already working on new solar water farms in Columbia and Haiti. They want to continue to find solutions to the clean water crisis that avoid destroying the environment of the places they’re trying to help. GivePower has already impacted the lives of 400,000 people with their solar panel installations. With their clean water venture, their impact will stretch even further. (7, 8)