by Erika Check Hayden: Doctors say gene medicine tailored to a single person can work, but it still costs millions… 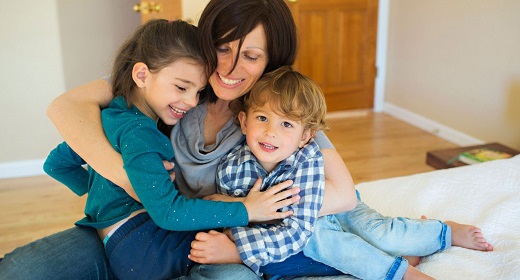 When six-year-old Mila Makovec was diagnosed with a devastating neurological disorder called Batten disease, the happy, active girl had already lost her ability to see, to say most words, and to walk without help. There was no known treatment for her fatal condition.

Then, in a dramatic demonstration of the power of personalized medicine, doctors in Boston created a treatment just for her. In only eight months, they found the genetic cause of Mila’s disease, designed a drug to overcome the error, and began giving it to Mila via an injection in her spine, in what’s believed to be the first individually tailored treatment of its kind.

Twenty months after Mila started receiving the drug, her mother, Julia Vitarello, and the doctor who helped her, Timothy Yu of Boston Children’s Hospital, say that the personalized treatment was partly successful. It has lessened Mila’s seizures, and she can eat pureed foods on her own rather than always using her feeding tube.

And Mila has had moments when she laughs and seems like her old self again, especially right after she takes a dose of milasen, the one-of-a-kind drug named after her.

Mila’s treatment, described today in the New England Journal of Medicine, shows how dozens of people from several labs and companies joined forces to create the drug. Now the question is whether other people will be able to benefit from similar hyper-personalized medicines, which could cost several million dollars each to produce.

It’s unclear who will pay for such individualized treatments, since they are not covered by insurance, and drug companies aren’t investing in them either.

“There are tens of thousands of Milas all around the world, and Tim [Yu] has showed a pathway that people can follow to develop therapeutics for these patients,” says Art Krieg, chief scientific officer at Checkmate Pharmaceuticals, based in Cambridge, Massachusetts. “We as a society have to decide how much is it worth to develop a therapeutic for a fatal disease. We have the technology in hand. It’s just a matter of paying for it.”

Already, Yu says, more than 100 other parents have asked for his help treating their sick children, but he won’t be able to help them all. He is exploring a pilot project to treat as many as 12 more patients for whom this type of customized drug approach might work. Elsewhere in the US, other families are working on their own to obtain similar medicines.

The FDA is also grappling with how to handle such N-of-1 trials, so called because they amount to an experiment involving just one person. In an editorial also published today, senior agency officials Janet Woodcock and Peter Marks say the FDA is developing criteria for doctors to follow, including how to  determine if the treatments are working.

To make milasen, Yu sequenced Mila’s genome, found the genetic glitches in a gene called CLN7 that cause her form of Batten disease, and then hired manufacturers to produce supplies of a drug called an antisense oligonucleotide to fix the error. Antisense drugs, which are injected, are short stretches of nucleic acids designed to silence or correct errant cellular messages.

Most drugs take a decade or more to reach the market and cost hundreds of millions of dollars to develop, but they can end up reaching thousands or even millions of patients. Yu’s approach, by contrast, offers hope to families affected by genetic diseases so rare that they have been abandoned by drug companies.

“What we’ve seen is really promising, and it deserves exploration,” Vitarello says. “It’s not magically going to be a cure for all these children, but right now these children have nothing, and their parents have to watch their children lose every ability and die.”

These urgent situations have led families to raise money through friends, family, and crowdfunding so they can pay academic labs to explore experimental treatments of all kinds, including gene therapies. The costs of such efforts can run into the millions.

“It’s clearly not sustainable or equitable for this to be borne completely off of parents foundations’ backs,” Yu says. But, he adds, “When a disease has too few patients for industry to tackle the case, that’s the way that things are happening right now, through parent-led effort.”

Yu hopes to change that, and with Vitarello’s help he is trying to organize a network of academic medical centers to work on personalized drugs and share their data. But even that would be likely to require investments from private foundations, he says.

Yu hasn’t said how much it cost to develop Mila’s medicine; other scientists say the cost to make one such drug, including lab tests and dealing with regulators, could be $3 to $5 million.

Mila’s treatment was paid for using funds from Boston Children’s Hospital, research grants, and two private foundations, including Vitarello’s Mila’s Miracle Foundation, which has been raising funds for research. Vitarello hasn’t said how much money the foundation invested in creating milasen.

Yu estimates that 1.4 million patients with rare, fatal genetic neurodegenerative diseases globally might be candidates for a custom-drug approach.

Right now, Yu says doctors should prioritize testing the personalized treatments on certain kinds of patients.  Their diseases should be caused by mutations affecting single genes that can be corrected by antisense technology. The illnesses should also be fatal, progressive, and untreatable through other means, he says.

And while it can be difficult to tell if medicines given to only one patient are really working, Yu has grown more confident about Mila’s progress since he first disclosed her case in October of 2018.

In his paper today in the New England Journal of Medicine, Yu reports that records kept by her parents, as well as brain recordings, suggest Mila is having fewer seizures—and they last for a few seconds rather than minutes, as in the past.

Because the seizures are markedly reduced after Mila is given a dose of milasen, Yu has reason to believe the medicine is actually lessening her symptoms: “We’ve seen evidence that this drug really seems to be benefiting her, and the clearest objective evidence I can point to is in her seizure pattern,” he says.

Vitarello says a casual visitor might not even notice Mila’s seizures now, and she’s taking half her previous dose of a different seizure medication. That’s a big improvement from where she was before starting milasen in January 2018: “I was having to hold her down at the dinner table, and she had bruises all over her legs,” Vitarello says.

But she says that while some of Mila’s symptoms have improved dramatically, others have improved less, or not at all. Overall, she feels that Mila has declined less severely than other children her age with Batten disease. But some of the improvements she saw over the first year of Mila’s treatment, such as her responsiveness to other people, are less consistent now than they were.

“For a full year right after the treatment started, she was laughing and smiling and more responsive for sure, without a doubt,” Vitarello says. “Over this second year, it’s been less frequent, and it’s very hard for me. As her mom it’s been really painful to me to see her not laugh and smile at the things that she always laughed and smiled at.”

That drives home the reality for Vitarello and for Yu. Mila’s future is still unknown, and most kids with her form of Batten disease die in childhood.

More recently, Vitarello has been traveling with Yu to other hospitals, hoping to convince them to work on more cases like Mila’s. For her, allowing more kids to access hyper-personal treatments would be an important part of Mila’s legacy.

“We’re learning so much from Mila, and we’re going to learn so much from the next kids, and we need to do it carefully and safely,” she says. “But we also need to do it quickly, because there are many more kids that could benefit.”