by Nicky Sehra: The ancient language of Sanskrit dates back to 2nd century BCE India… 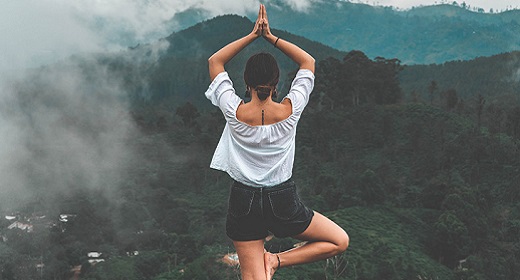 Sanskrit was considered the language of the Gods. It was the philosophical language of Hinduism, Sikhism, and Buddhism. Sanskrit was used in ancient poetry, drama, and religious/philosophy texts.

So – how is Sanskrit connected to yoga?

During the era that yoga was developing in India, Sanskrit was the common spoken and written dialect. For reference, the Bhagavad Gita and Pantanjali’s Yoga Sutras were written during the same time period.

Today, yoga teachers from around the world guide students through poses often still using their Sanskrit names. As yogis, we are connected through the Sanskrit language no matter what your native language is.

Ahimsa: a-HIM-sah
Non-violence; compassion for all living things. Ahimsa is the first of the Yamas, or moral codes in yoga to live by.

Ananda: A-nun-dah
Defined as ecstasy, a state of complete bliss and love. Ananda Balasana in Sanskrit is Happy Baby Pose

Ardha: AR-dha
Translates to “half,” as in Ardha Chandrasana or Half Moon Pose

Asana: A-sa-na
The physical postures of yoga. Every yoga pose name in Sanskrit ends with asana (which is how you know a Sanskrit word is referring to the name of a pose)

Bandha: bAhn-da
A body lock in yoga, the combination of muscles that are contracted and focused in order to direct energy flows

Bhakti: bAHk-ti
Love and devotion, from the root word “bhaj” which means “to adore or worship God,” bhakti is love toward the Divine

Chandra: chun-drAh
The moon, as in Ardha Chandrasana or Half Moon Pose

Chakra: CHak-rah
Seven energy centers in the body each associated to a specific color, emotion, and earth elements

Dharma: DAR-mah
The teachings of the Buddha; one’s life purpose or path to truth and enlightenment

Drishti: DRish-ti
A technique used in yoga to set your gaze and help with concentration, balance, and focus

Eka: Eh-kah
One; often used in many yoga postures that engage one limb to bend or stretch, such as Eka Pada Rajakapotasana, or One Leg Pigeon Pose

Guru: gOO-roo
A spiritual teacher who offers knowledge and guides one to the path of awakening

Hatha: Hah, Tah
Combine to create the word “Hatha.” Ha translates to the Sun, and Tha, Moon. While practicing Hatha Yoga, the desire is to balance the sun and moon energy in the body

Hasta: HAs-ta
The hand (or arm)

Japa: jAh-pah
The recitation of mantras or prayers, commonly used in Bhakti Yoga

Karma: kAR-mah
The law of cause and effect, the total effect of one’s actions during their existence on earth. Each action dictates their fate and destiny

Kirtan: kUR-tan
Devotional singing of hymns, mantras, and chanting in a community gathering

Mudra: mOOd-rah
A symbolic hand gesture used in yoga practice to stimulate the flow of energy to a particular intention

Pada: pAH-dah
Foot or leg, as in Eka Pada Rajakapotasana, or One Leg Pigeon Pose

Pranayama: prAH-nah-yah-mah
The control of energy through breathing and conscious breath work

Surya Namaskar: sUr-ya na-ma-skA-ra
The Sun Salutations – a practice of yoga flow exercises to enhance the light within

Tada: tA-dA
Mountain, as in Tadasana, or Mountain Pose

Tapas: tA-pAs
Austerity and self-discipline – an important aspect of the Yoga Sutra. One must have discipline and focus while practicing yoga. Tapas is the third Niyama, or moral code to live by.

Yoga Sutras: yo-gA sUt-rAs
Ancient Indian texts written in Sanskrit by the sage Patanjali that describes the philosophy and practice of yoga