It’s hard to tell the truth sometimes. But it’s especially hard when no one else sees things quite the way you do… 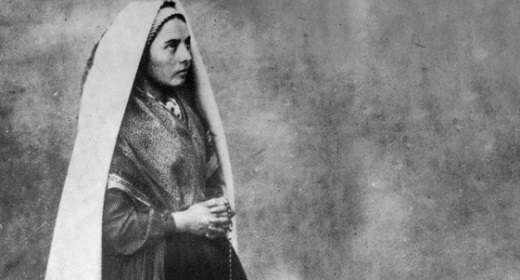 Maybe Saint Bernadette’s story will help you out. She was just a young girl who saw something amazing and told the truth about it. Hardly anyone believed her at first, and people even made life difficult for her and her family because of what she said she saw. But Bernadette never backed down, and the truth she told has helped millions of people, even people who live today. 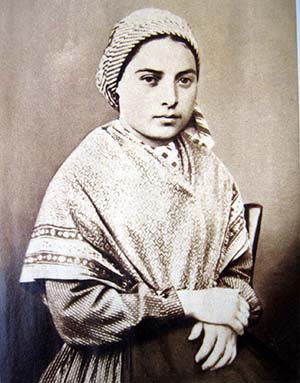 Bernadette’s life wasn’t easy to begin with. She and her family lived in terrible poverty in a village in France called Lourdes. By the time she was 14, Bernadette had been sick so often that she hadn’t grown properly. She was the size of a much younger girl. She, her parents, and her younger brothers and sisters all lived in a tiny room at the back of someone else’s house, a building that had actually been a prison many years before.

They slept on three beds: one for the parents, one for the boys, and one for the girls. Every night they battled mice and rats. Every morning, they woke up, put their feet on cold stone floors, and dressed in clothes that had been mended more times than anyone could count. Each day they hoped the work they could find would bring them enough bread to live on that day.

Bernadette’s life was terribly difficult, but she wasn’t a miserable girl. She had a deep, simple faith in God. She didn’t mind any of the work she had to do, whether it was helping her mother cook or taking care of her younger brothers and sisters. There was, though, one thing that bothered her. She hadn’t been able to attend school very often, and she didn’t know how to read. Because of that, she had never learned enough about her faith to be able to receive her first Communion. Bernadette wanted to receive Jesus in the Eucharist, but her days, which were full of hard work, left little time for learning.

Like other girls, Bernadette had many friends. She spent time with them in the countryside, playing and gathering wood for their families’ fireplaces and stoves. One cold February day, Bernadette was out with her sister and a friend, doing just that. They wandered along the river until they came to a spot where a large, shallow cave called a grotto had formed in the hilly bank. Bernadette’s sister and friend decided to take off their shoes and cross the stream.

Because she was so sickly, Bernadette knew her mother would be angry if she plunged her thin legs into the icy water, so she stayed behind. But after a few minutes, she grew tired of waiting for her companions to return. She took off her stockings and crossed the stream herself.

What happened then was very strange. The bushes that grew out of the grotto walls started blowing around as if they were being blown by a strong wind. Bernadette looked up. High above her in the grotto stood a girl. The girl was wearing a long white dress with a blue sash and a white veil. Yellow roses were at her feet, and she held a rosary. She nodded at Bernadette and then stretched out her arms.

Bernadette was afraid, of course, but it wasn’t the kind of fear that made her want to run away. She stayed where she was and knelt down. She reached into the pocket of her worn-out dress, found her own rosary, and started to pray with the girl. When she finished, the girl disappeared.

Bernadette didn’t know who or what she had seen. All she knew was that being there had made her feel happy and peaceful. On their way back to Lourdes, she told her sister and friend what had happened, and soon the whole village knew.

Over the next few weeks, Bernadette returned to the grotto and saw the beautiful girl several times. Each time she went, more people went with her. Although only Bernadette could see the girl in white, when the other villagers prayed with her in the grotto, they felt peaceful and happy too. Those who were sick even felt that God had healed them while they prayed.

Bernadette had no idea what this meant. She repeated it to herself over and over on her way back to the village so she wouldn’t forget the strange, long words. When she told her parish priest what the girl had said, he was quite surprised.

The priest knew that what the mysterious girl had said meant that she was Mary, Jesus’ mother. The mysterious girl of the grotto had told Bernadette who she was. But it was not very common for people—especially poor little girls who couldn’t read—to think of Mary as the “immaculate conception,” a phrase that reminds us of how God saved Mary from sin even before she was born.

When Bernadette told people what the girl had said, it convinced many people that she hadn’t made her story up and that what she’d seen really had come from God. Not everyone believed her, though. Bernadette had to tell her story over and over again, sometimes to village and church leaders who weren’t very kind to her and her family.

And just think—all of this happened because a young girl named Bernadette told the truth!