by Andrea D. Steffen: Lithium-ion batteries are just as important as solar panels and wind turbines in our pursuit of sustainable energy… 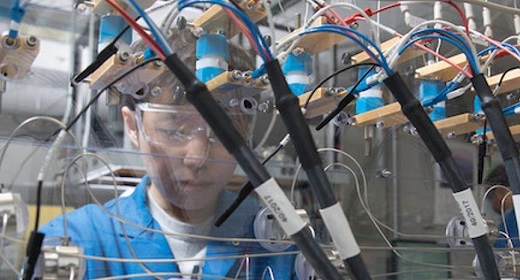 The use of lithium-ion technology is sustainable, however, its materials are not. When the battery has served its purpose, if it’s not disposed of correctly, it has a profoundly negative impact on the planet. Furthermore, the making of the batteries involves sourcing of heavy metals that are expensive and come at a substantial humanitarian and environmental cost.

In search of a better option, IBM found a way to make a battery that relies on materials from seawater instead. Testing revealed that the new battery is just as good as the one made with heavy metals, such as cobalt and nickel.

In retaliation to the unethical practice of how heavy metals are attained, as well as the damage these metals cause when they leak out into the environment, companies like IBM have taken a considerable interest in developing alternatives that don’t require the use of heavy metals.

For example, Cobalt has been in the spotlight lately with a 2016 investigation by The Washington Post exposing mines for their use of child labor in the Democratic Republic of Congo. Children die or are permanently injured while illegally mining cobalt for use in Apple, Google, Microsoft, Dell, and Tesla products. 14 Congolese families have recently filed lawsuits against those companies because of this. Aside from the harm cobalt mining causes to people, the excavation of the material also devastates landscapes and pollutes water supplies, which end up degrading soil and ruining crops.

Cobalt and nickel are used in the cathode component of a lithium-ion battery. In their place, IBM’s batteries use three materials extracted from seawater, plus a new type of liquid electrolyte. The company said that the resulting chemistry produced promising results in preliminary testing. It even avoided the formation of tentacle-like dendrites during charging – something that usually happens with experimental batteries. The dendrites constitute a significant drawback since they increase the chance of failure or fire.

The cobalt- and nickel-free battery is even much faster at charging. It achieves an 80% charge within five minutes! Its energy density is more than 800 W/L, and its power density is greater than 10,000 W/L – meaning IBM’s seawater battery is equal to or better than today’s standard lithium-ion batteries.

Now armed with an eco-friendly battery solution, IBM has partnered with Mercedes-Benz research branch in North America and other research partners to work towards commercial development.