Shhh! This Is The First ‘Quiet Park’ In The World

by Christian Cotroneo: Ecuador may have a new tourism jingle. But they don’t want anyone to actually sing it… 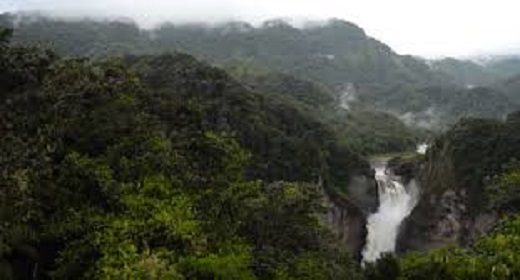 Indeed, the country’s latest national park is built on the mantra that silence is golden. The South American country has become the first in the world to build a “quiet park,” a lush stretch of land straddling the Zabalo River where silence is protected like a natural resource.

There are no transport routes here. Nor residential and commercial developments. You can’t even hear the hum of power lines.

Dubbed Wilderness Quiet Park, and spanning about a million acres, the land is owned by the indigenous Cofán people of Ecuador. But hopes are high that this unique space in a world increasingly beset by noise will kickstart tourism in the region — quiet tourism, that is.

“The Zabalo River is a living Eden,” Gordon Hempton, an ecologist and co-founder of Quiet Parks International, tells American Way magazine. “It’s like walking inside a huge biological clock, where you can almost hear the ticking of nature. It’s a transformative experience.”

As rare as they may be, there are still pristine parts of this world virtually untouched by human hands. Beaches in the Seychelles come to mind. That’s because about half the island is designated a conservation area. Of course, there’s the opposite end of the spectrum too. The vast Kronotsky Nature Reserve in Russia’s Far East doesn’t bear many human footsteps, either.

But places untouched by human-made sounds — with nary even the roar of a jet flying over — may be even rarer.

These days, from the steady thrum of traffic to buzzing billboard lights, it’s almost impossible to escape the human racket. And it’s taking a serious toll on the health of animals, including humans.

When the Zabalo River received its certification last year from Quiet Park International — an agency dedicated to spreading quiet across the globe — Hempton described it as a kind of sanctuary for increasingly endangered silence.

“Until now, not one place on Earth has been off-limits to noise pollution; natural quiet has become an endangered species without people knowing it,” he noted in a release.

“Science has made it abundantly clear that noise pollution is not just an annoyance, it causes health loss and dramatically impacts wildlife’s ability to survive. By certifying the Zabalo River as the world’s first Quiet Park, we are paving the way for many more Quiet Parks around the globe.”

One of the key tests Zabalo River passed for the certification process was having a noise-free intervals that last several hours.

So, what’s it actually like when nature is the only soundtrack? Here’s how Sam Goldman describes it for Vox:

“The howler monkeys suddenly roar like revving motorcycles; insects buzz like TV static; the Zabalo babbles as if the ear is just above its surface; and birdsong cackles, shimmers tambourine-like, and pops like a toddler imitating a machine gun — pyoo-pyoo-pyoo!”

But the park not only gives nature a chance to find its voice. The people who own the land — the Cofán — have long counted themselves as caretakers of the rivers and rainforests in the region but their numbers have dwindled to fewer than 2,000.

The new designation, Quiet Parks International notes, will help the Cofan Nation “defend their lands and preserve their culture.”