by Scott Galloway: So, there was a time when there was … no time… 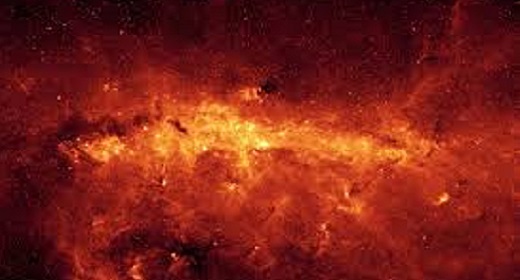 Before the Big Bang (a dot that exploded) there was no time. Are we pre dot? Sheltering in place, time feels amorphous and nonlinear.

Time has a lot to do with our perception. Our focus on different things at different levels of intensity creates deceleration/acceleration and other opposing forces that coexist. It feels like forever since I hung out with friends and expectorated droplets into the air of an overcrowded East Village restaurant. Concurrently, time has lost purchase. The last six weeks have been a blink of the eye. Time stands still, yet accelerates.

So, around 14 billion years ago, within a trillionth of a second, the dot exploded, inflated the universe, and set in motion a series of events where stars gravitated together to form galaxies. Planets coalesced around newly forming stars, including our own sun. And 3.7 billion years ago, life took root on Earth.

Time is linked, and benchmarked, to motion — the rotation of the earth and moon that mark our days and years. Recently, the markers of coming and going to work and week vs. weekend have become amorphous. In this fluidity of time it feels as if gravity is pulling me toward my own singularity. If the previous sentence sounded like “time flies,” trust your instincts.

As an atheist, I believe that my soul’s progress and motion is finite. My atheism, while lacking the comfort of an invisible friend, motivates me to focus on how to slow down the most linear and irreversible of things … time. I don’t count on an expansion, the infinitude of an afterlife. For me it’s all here, now. Or maybe it’s just the edibles speaking. But I digress.

My colleague professor Sonia Marciano introduced the concept of variance, and the gangster move of focusing on the piece of the supply chain with the greatest discrepancy. If you’re a car manufacturer and dealerships present a broad range of experience, then you should focus your resources on dealerships. Apple and Amazon recognized the huge delta in distribution and fulfillment and achieved the greatest unlocks in retail history with Apple Stores and Amazon Fulfillment. Look for opportunities where variance and weight are highest.

Time is linear, but motion through, and progress against, time can fluctuate due to an exogenous shock (a global pandemic). There are moments — when the progress of your peer group has greater variance — that offer unique opportunities to detach from a fixed path and cover more distance relative to peers, in less time.

Functional Speed and Thanksgiving in Europe

Hall of Fame receiver Jerry Rice wasn’t that fast, but he had “functional speed,” the instincts to accelerate or decelerate when it mattered most. When I started L2, we used to go to Europe over Thanksgiving, as Europe was open for business on the Thursday/Friday of that week. If I sound like a workaholic, I’m not. I am outstanding at not working and have a passion for it. However, my leisure is possible because I recognize when to come to play — turn on the jets.

We’d do Burberry/Unilever in London on Thursday and LVMH/Chanel in Paris on Friday. In sum, we worked while others were resting … and lapped the competition. It’s not just working harder than your peers, but knowing when to go hard at it … when there’s variance.

The motion/progress of corporate America toggles between 0 and 100% during a pandemic. As Condé Nast and Axios spend most of their time laying people off, or applying for PPP loans only to be shamed into returning them, Facebook strikes a deal with JioMart in India to monetize a 400 million strong WhatsApp. While most firms and people are operating at reduced speeds, this is the time to go to Europe over Thanksgiving, and apply functional speed.

Note: not suggesting anybody travel right now … it’s a metaphor.

The cardinal opportunity in this pandemic is the chance to repair and strengthen relationships. The majority of medals and recognition bestowed on our women and men in uniform is a function of one thing: grace under fire. Your character, and the perception of your character, is a sum of all your actions across your entire life. But the sketch of these actions is traced over with the indelible ink of the grace, or lack thereof, that you demonstrate in times of crisis.

The chart below is a decent framework for helping yourself and others. Isolation fosters introspection. If the growth zone is too far off right now, or if you’re struggling with mental health or addiction issues, then just getting through the day is good enough during a pandemic. You’re a loving person and a responsible citizen? That’s mostly what’s asked of you. You might find, however, that taking a moment to think big picture, or how you could help others, can elevate you above the fear zone. Generosity produces more endorphins in the brain than self-interested behavior.

I’m still too insecure, self-conscious, and clinging to a bullsh*t cartoon of masculinity (quiet = strength) to express the admiration, affection, and love I feel for family and friends. Working on it.

It’s all going so fast. It was a blink of an eye when I looked up at the commencement crowd at Berkeley’s Greek theater and saw my mom waving at me. I got a job, got married, and was just starting to be the caregiver she was to me. And then, in a blink, she was gone.

That was 25 years ago. In another blink, I’ll be near the end. One of my fears is that time continues to accelerate, and I’ll have let my own insecurities and bullsh*t get in the way. That they will diminish the opportunities to achieve the only thing that matters: deep, meaningful relationships … and it will be too late.

The pandemic has created variance and a meaningful chance to lap the competition. And it’s given us a profound, maybe once-in-a-lifetime opportunity to be the man or woman our kids think we are, and our parents hoped we’d be.

There are so few absolutes. One is that no one, near the end, wishes they had been less forgiving, less generous, or less loving during times of crisis. Time has slowed, for the moment, and we are given the opportunity to repair and strengthen in weeks what can take decades.