Are You ‘Virtue Signaling’?

by Jillian Jordan and David Rand: Probably. But that doesn’t mean your outrage is inauthentic… 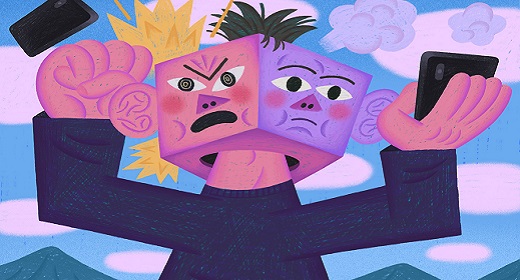 Expressions of moral outrage are playing a prominent role in contemporary debates about issues like sexual assault, immigration and police brutality. In response, there have been criticisms of expressions of outrage as mere “virtue signaling” — feigned righteousness intended to make the speaker appear superior by condemning others.

Clearly, feigned righteousness exists. We can all think of cases where people simulated or exaggerated feelings of outrage because they had a strategic reason to do so. Politicians on the campaign trail, for example, are frequent offenders.

So it may seem reasonable to ask, whenever someone is expressing indignation, “Is she genuinely outraged or just virtue signaling?” But in many cases this question is misguided, for the answer is often “both.”

You may not realize it, but distinguishing between genuine and strategic expressions of indignation assumes a particular scientific theory: namely, that there are two separable psychological systems that shape expressions of moral outrage. One is a “genuine” system that evaluates a transgression in light of our moral values and determines what level of outrage we actually feel. The other is a “strategic” system that evaluates our social context and determines what level of outrage will look best to others. Authentic expressions of outrage involve only the first system, whereas virtue signaling involves the second system.

This theory may be intuitively compelling, but new research suggests that it is wrong. Psychological studies reveal that a person’s authentically experienced outrage is inherently interwoven with subconscious concerns about her reputation. In other words, even genuine outrage can be strategic.

In a paper forthcoming in The Journal of Personality and Social Psychology, we show that even when people are unobserved — and thus have no incentive to signal their virtue — their sense of moral outrage is influenced by their desire to be seen positively by others.

In several experiments, we presented participants with an act of selfish behavior, in which one person was given an opportunity to split a sum of money with another person but decided to keep all the money for himself. Then we asked the participants to rate their degree of outrage toward the selfish person. This took place in a completely anonymous online environment, so that no one — not even us, the researchers — could link the subjects’ responses to their identities.

But before we asked our subjects to rate their degree of outrage toward the selfish person, we asked about half of them to complete another task: We provided them with a sum of money and gave them the opportunity to share it with an unidentified stranger. (Some shared, some didn’t.) This also took place in a completely anonymous online environment.

On the face of it, this might seem strange. Why would having an opportunity to act morally in one setting influence your level of moral outrage in another — especially when your identity is secret the entire time?

Our data support the following explanation: People have a subconscious desire to signal their virtue. Even in private, people implicitly ask themselves, “If I were being observed, how good would I look?”

Consider the participants who were given an opportunity to act morally by sharing money. If they had been observed, their choice would have served as a powerful signal of their virtue (or lack thereof). And as a result, the value of expressing outrage as a virtue signal would decline. After all, if a participant chose to share, she would look virtuous regardless of how much outrage she subsequently expressed toward the selfish person. (And if she chose not to share, she would look dishonorable regardless of how much outrage she later expressed.)

In contrast, the participants who were not given the opportunity to share money had no way to signal their virtue to a hypothetical observer besides getting outraged. So, even though no one was watching, they had a stronger subconscious motivation to express outrage — and, as we found, they reported feeling significantly more outraged.

What our findings show is that asking whether outrage is “pure” is the wrong question. Even authentic outrage is influenced by implicit strategic calculations. This shouldn’t come as a surprise to anyone familiar with evolutionary theories that hypothesize that morality arose precisely as a way of signaling one’s trustworthiness in cooperative endeavors.

But this also shouldn’t strike you as cynical. In fact, we view our findings optimistically. They suggest that if an individual is motivated by a desire to signal her virtue, that does not necessarily mean she is faking her outrage. Of course, people do sometimes fake or exaggerate their outrage to look good. Our point is that the presence of strategic motives does not itself make a moral reaction inauthentic.

That’s something to keep in mind the next time you are tempted to dismiss something as mere virtue signaling.