The Third, Fourth And Fifth Planes Of The Upper World

by Dr. Alberto Villoldo: Last week we learned about the first two levels of the Upper World of the Laika: The Level of the Stone People and The Level of the Plant People. This week we’ll explore the remaining three… 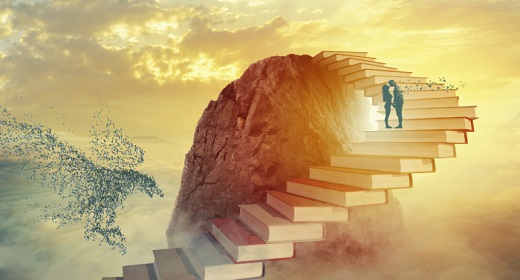 The Third Plane: The Level of the Animal Spirits

The third tier of the Upper World is where the spirits of all earth’s creatures still roam—the elk, the eagle, the raven, the salmon, and the jaguar—and also extinct species such as the saber-toothed tiger, the mastodon, and the prehistoric whale.

Even though it’s a more elevated level, this plane is still not “home” to human beings. Individuals aren’t differentiated from each other, and there’s nothing but a complete absorption with nature, because animals have collective souls, unlike humans who have individual souls. There’s no consciousness, no separation from anything that occurs around you—instead, you’re absorbed and possessed by the collective, with no sense of “I,” or self. Time is completely fluid in this world, although there’s still a past and present.

The human souls that inhabit this world are in their final stages of purging. All that’s required now is that they awaken and realize that they’re dreaming. According to legend, you may not leave this tier until you can participate consciously in the evolution of all life.

Note that as you pass through the three natural domains of the Upper World, you may find the spirits of your ancestors, but you cannot contact them. You might meet your grandfather or an old friend in one of these domains, but they won’t respond. This isn’t where you commune with your departed loved ones, because they’re occupied with purging and are inaccessible to the living. They can’t hear you, and you can’t offer them assistance. They might feel your love and your compassion, but they won’t be able to perceive you. Now, although there are healers who specialize in assisting these beings, these souls have to go through their own process of forgiveness and atonement before they can find grace and be accessible to other humans in the fourth tier of the Upper World.

The Fourth Plane: The Level of Ancestors

The souls of your ancestors reside in the fourth tier, and you can engage them in dialogue because they’ve finished their own atonement process. This domain is filled with people, places, and things that mirror and parallel those from your world. Here you can meet your loved ones who have completed the journey back “home.”

Everything you’ve done thus far has been to heal your past now, while you still have a physical body, which will help you avoid the long and arduous journey through the lower planes of the afterlife. It’s all been preparation for meeting your celestial parents, who will help you choose the next family you’ll be born into, the circumstances and place of your next birth, and what kind of life experiences you’ll have in your next incarnation. You see, your soul exerts a tremendous gravitational force on the family it wishes to be born into, even bringing lovers together for a single night of romance in order to be born to those parents.

Your celestial parents will remind you of the reason that you were given life, and they’ll restore to you the terms of the original sacred contract with Spirit that you entered into. Although these great beings are referred to as “parents,” they’re not your biological ancestors— instead, they’re benevolent archetypes who are free of the psychological and genetic baggage that your human parents handed over to you. They’re your spiritual, not physical, lineage, and they guide you without judgment or expectation, welcoming your soul home, and helping you reestablish your original destiny.

The life-review process occurs in the presence of your celestial parents, and this is where you’re the accused, the defendant, the judge, and the jury all at once. This is where you render your accounts as to how you’ve been true to your original soul contract: How faithful have you been to what you came to learn? How did you come to experience love and to serve? In the same way that your biological parents deliver you into this world, your celestial parents deliver you into the next, welcoming you home after your death.

The fourth tier is a realm of peace and rest for humans, where souls gather between incarnations. Even though you’ve purged and atoned, your soul’s history will determine your next incarnation. Time stands nearly still, but cause and effect and the law of karma still predominate. A minute in this realm can be a century of Earth time. And according to legend, you don’t evolve beyond this domain until you accept responsibility for dreaming the entire universe into being. (More on this in a future blog.)

The Fifth Plane: The Level of the Highest

From the fourth tier, you can climb a ladder into the fifth and highest level of the Upper World. This is the realm of the angels and archangels, where the great medicine healers reside. This is where all the souls dedicated to assisting humankind dwell, including the bodhisattvas of Buddhism and the saints of Christianity. This is where you meet the self that never entered the stream of time, the one containing all the knowledge of the person you’re evolving into.

Although this notion of “climbing a cosmic ladder” might seem strange, representations of this ladder can be seen sticking out of underground kivas and pointing toward the sky all over the American Southwest. In the Inka tradition, this ladder leads to Sirius, the Dog Star, and then into the Upper World.

Next: The value—and cost—of visiting the upper world.