by Andy Kostka: As his brother lay in UPMC St. Margaret Hospital in Aspinwall, Ted J. Szoch carried his cellphone with him everywhere… 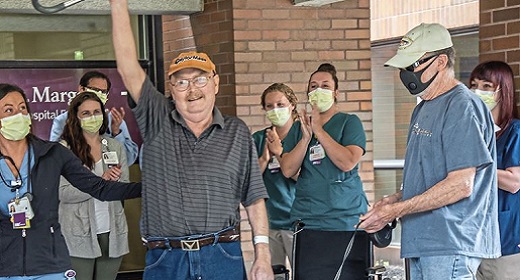 Normally using the phone for emergencies only, the 78-year-old didn’t know when that crucial call might come, or what the doctors on the other end of the line might say when he got it.

Besides praying — and just about everyone he knew was doing that — there wasn’t anything Ted could do for his brother. But he still wanted to be ready for the worst, if it came to that. And during a 21-day period in which Fred Szoch, a 69-year-old Lower Burrell resident battling COVID-19, lay in a medically induced coma hooked up to a ventilator, the worst seemed increasingly likely.

That call, the one Ted dreaded the most, never came.

After 75 days in the hospital, Fred exited St. Margaret on Monday morning to the cheers of doctors and nurses. His dog, a Gordon setter named Brook, gave him a lick on his face as a long-awaited hello.

Then Fred stood up out of his wheelchair, lifting his cane in the air, walking and breathing on his own.

But that joyous reunion outside St. Margaret once was in doubt.

Ted began searching for Fred’s last will; he couldn’t find it. Doctors told Ted end-of-life staff might be needed, just in case.

“You just didn’t know which way it was going to turn,” Ted said. “I never knew what the next phone call was going to bring.”

Before Fred’s 75-day spell in the hospital battling the coronavirus — and a C. Diff infection that slightly prolonged his stay — Fred was already at a higher risk to contract the illness. With a weakened immune system after dealing with non-Hodgkin’s lymphoma in 2019, Fred also overcame two bouts of lung cancer years earlier.

So when Fred, Ted and two other friends attended the musical “42nd Street” at Freeport High School on March 12 — the day before Gov. Tom Wolf ordered schools to close in the state due to coronavirus — Ted was uneasy.

“When I saw how crowded it was, it was not a good situation for him to be in,” he said. “But we were there.”

About a week later, his brother said, Fred began showing coronavirus symptoms. And after his test came back positive, Fred’s doctor at the UPMC Hillman Cancer Center told him to go to the emergency room. Two days later, on April 3, Fred was in the intensive care unit on a ventilator, the start of a lengthy battle.

Fred doesn’t remember much after being admitted. He knows some of the details, bits and pieces friends and family have since relayed.

He packed his bag before heading to the emergency room. He remembered his phone book — full of contacts who would help him pass the time once he was healthy enough to talk. He got carried inside by medical personnel upon arrival. After two days, he experienced respiratory failure, was moved to the ICU and spent the next 21 days on a ventilator.

He knows now how serious things were, because his brother informed him.

Meanwhile, as Fred lay in the ICU and his family was left to worry from afar, acquaintances and strangers alike pulled for him. One of his cousins got her whole church to pray for Fred. His brother received seven or eight phone calls a day, asking for updates.

After about two weeks on a ventilator, doctors told Fred’s brother they didn’t know if he would survive. So his sister said a prayer to their mother.

“And the very next day,” Fred said, “I started breathing on my own.”

That allowed medical staff to begin to wean Fred from the ventilator, slowly decreasing the amount of assistance the ventilator provided to allow Fred to do more breathing on his own, said Kim Farrell, a physician assistant in the UPMC Department of Physical Medicine and Rehabilitation.

“This is a miracle,” said Ted H. Szoch, a cousin. “Man, this is great. Just great. I can’t believe it’s happening.”

But Fred still had a long way to go before discharge, needing physical therapy from being in a hospital bed for so long. He also needed to slowly return to eating solid food, with swallowing exercises added to his daily routine.

Medical staff took out his feeding tube about three weeks ago, and he began with pureed food. Once Fred passed a swallowing test, he got to enjoy solid food chopped into tiny pieces. And about a week before his discharge, Fred received an even better treat: a slice of pizza.

Fred thinks keeping a positive attitude during the ordeal — even when times were at their hardest — helped him pull through. When he underwent chemotherapy for lymphoma, he kept himself occupied by writing comedy routines. This time, he doled out economic advice, advising nurses to invest in a Roth IRA retirement account early.

But above all, he and his brother credit the staff at St. Margaret Hospital, the ones who surrounded Fred as he left the facility after 75 days of care.

“I think it’s a remarkable story of faith,” Fred said. “Something more than me has contributed to this, and I feel like I was surrounded by angels with the nurses and the therapy staff. I thought the doctors were just totally amazing. UPMC, they never gave up. Never gave up on me. And that’s really a wonderful thing to have happen to you.”

He looks forward to when he’s strong enough to walk his dog once more and swing his golf clubs again. But he knows that might not be for quite some time.

So for now, Fred’s grateful for what he can do — saying hello to his Gordon setter, breathing on his own and walking away from the hospital that saved his life.

“I am happy — delighted — to go and see what’s ahead,” Fred said. “It really makes you appreciate life. Life is a precious commodity.”