How To Be Stewards Of The Land

by Nicole Horseherder: I’m Diné and live on Black Mesa in the Navajo Nation. Traditionally, our people were sheepherders and moved with the sheep to a new location when the seasons changed… 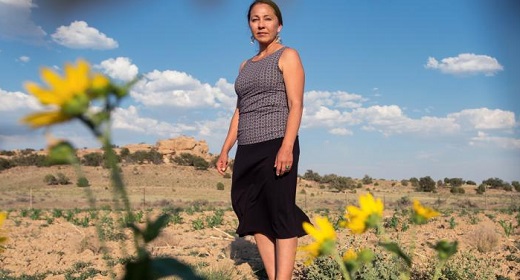 When I was growing up in the 1980s, almost all the families had settled down to live in one place year-round. My grandmother was an exception. She was in her eighties but still really fit and taking care of the herd the way she was taught—bringing in the ram from the pasture in the late fall and taking him out in the early winter. The sheep spent the winter along the canyon cliffs so they would be sheltered from the wind and cold. In the summertime, my grandma would take them to high pastures.

My mom was an academic counselor in Tuba City, and I lived with her in town while I was in high school. But on weekends, I would drive an hour back to Black Mesa to be with my grandmother and the sheep. We lived in the traditional stacked-log homes that my grandfather had built at each location. There was no plumbing or electricity. My grandma would take the sheep to the windmill, which tapped shallow aquifers. We also got water from community wells or a spring.

But in 1998, when I returned as an adult to build my own home at Black Mesa, some of these places didn’t have water anymore. In the late 1960s, the Peabody Coal Company started mining coal here. It operated two mines, Kayenta and Black Mesa. Kayenta supplied the nearby Navajo Generating Station, and Black Mesa supplied the Mohave Generating Station. The mining took billions of gallons of groundwater, using it to deliver coal to the power plant in the form of slurry. The water table dropped, and contaminants in the water increased.

Usually when a coal mine comes in, the people living nearby move out and are compensated. But here on the Navajo reservation, people continued to live in the coal-mining areas. Traditionally, our people live in matrilineal clan communities. In any one area, you have extended families all together, so you’d have to move a whole clan. But it’s not like outside the reservation, where people can pick up and go somewhere else—they are bound to the place where they live, and every corner of the nation is being used, and no one wants to move off grazing land. So a couple of thousand people live near the coal-mining operations and have been breathing coal dust 24 hours a day, seven days a week. They have to deal with the air pollution and exposure to toxics like mercury, selenium, arsenic, and lead.

Discovering that changed my life path. I had planned to teach at a local community college. Instead, I used my training to stop the mining by writing and community organizing under the elders’ direction. In 2001, we formed an environmental group called Tó Nizhóní Ání (Beautiful Water Speaks). I serve as its executive director. We were able to shut down the Black Mesa mine and its slurry pipeline in 2005. The Kayenta mine still uses groundwater for its operations, but now it and the Navajo Generating Station are going to shut down, so we are focusing on what comes next.

I’ve submitted legislation to the tribal council that would rescind our energy policy and start exploring a transition to 100 percent renewable energy. In the future, I hope to see the Navajo Nation get off the electricity grid and use solar for individual or residential use as well as at a commercial scale. That’s the way we need to start doing things, since it will take away our dependence on utilities.

What needs to be front and center for the energy policy is Diné fundamental law. This says that law is given by creation and emphasizes how to live on the lands we were given, how to be stewards of the land, and how to live in balance with the environment. This law was established long before we got colonial law, long before settlers came to this land and established laws for us. We have to use it to guide us into the future—we should have been using it all along. It will provide clear guidelines on how companies should do business with us and sustainability practices they must follow.

It’s now time for us to bring about economic prosperity on our own terms.