The Conscience Of Silicon Valley

by Zach Baron: Tech oracle Jaron Lanier warned us all about the evils of social media. Too few of us listened. Now, in the most chaotic of moments, his fears—and his bighearted solutions—are more urgent than ever… 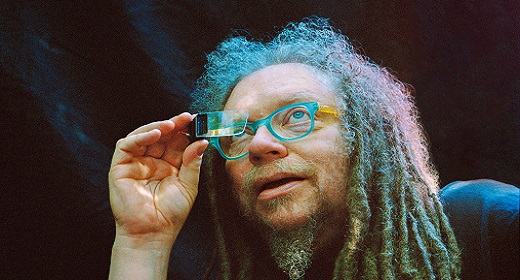 There Jaron Lanier and I were, side by side on my computer screen, in a virtual space that looked a little like a conference room and a little like a movie theater. We could’ve been jurors, maybe. I was able to approximate rubbing his head. “As you have discovered,” Lanier said, noticing, “you can reach and interact with people a little bit. So there is this shared-space quality.” He was in Berkeley, California, in the hills above the city, in a house that looks out over the bay. I was in Los Angeles. Five minutes ago we were in our own separate video-chat windows, the ones many of us now see as we’re going to sleep, our dumb faces staring back at us. Then he had hit some buttons. Now we were together.

Lanier calls this technology Together mode; he helped design it this spring for Microsoft, where he has a post as an in-house seer of sorts. Initially he’d conceived of Together mode as a way to help Stephen Colbert—in whose house band Lanier sometimes performs when he’s in New York—figure out how to host his show in front of a remote audience. (Lanier is sometimes credited as the father of virtual reality; he is also sometimes credited as the owner of the world’s largest flute, in addition to the many other exotic instruments he collects and expertly plays.) But mostly he was trying to solve, as he’s been doing since the early ’80s, a problem relating to technology and how humans might use it. In this case: How could we better, more naturally communicate with one another in the middle of a pandemic?

He explained a bit more about how Together mode worked, how it soothed what the medium had previously tended to aggravate. Being side by side, instead of separated—and being able to make eye contact, as we now could—worked on the psychology; it made you a little more playful, a little more relaxed. It might even help build, in the words of the NBA—which swiftly adopted Together mode as a way to project remote fans onto courtside monitors in otherwise empty Florida arenas—“a sense of community.”

“People who are addicted to Twitter,” Lanier said, “are like all addicts—on the one hand miserable, and on the other hand very defensive about it and unwilling to blame Twitter.”

“What I’m hoping,” Lanier said, gesturing around our virtual space, “is that people find a little bit of well-being in it. Like, we can’t pretend it’ll do that much, because everything sucks, but it’s a little something. It should help a bit.”

Why were Lanier and I talking? I don’t mean this question rhetorically; this was something he asked me, more than once. I tried to explain. I was interested, I said, in his life, which was marked in equal parts by tragedy and luck, populated by a gallery of figures—Richard Feynman, Philip Glass, Joseph Campbell, Forest Whitaker, Steven Spielberg—too numerous and random to fully list. I was interested in his work too—as a creator (of video games, VR, facial-recognition software, medical-training devices), as a thinker, and as an author of four acclaimed books in the past decade about the promise and perils of technology, books that suggested he might be the last moral man in Silicon Valley. At a moment when our tech overlords seemed bent on consolidating power and taking over whatever parts of our lives they hadn’t already taken over, Lanier—a tech insider who has been part of the industry for nearly as long as the industry has existed—had chosen instead to speak out against his peers and to suggest a different, more human logic for how they might treat the rest of us.

I said I was particularly interested in his most recent work, 2018’s Ten Arguments for Deleting Your Social Media Accounts Right Now, which is as clear and definitive an account of the damage companies like Twitter and Facebook and Google do to society and to our individual psyches as you’ll ever read. The book felt relevant again right now, I said, in a way that made my bones actually vibrate. Lanier had been early to the idea that these platforms were addictive and even harmful—that their algorithms made people feel bad, divided them against one another, and actually changed who they were, in an insidious and threatening manner. That because of this, social media was in some ways “worse than cigarettes,” as Lanier put it at one point, “in that cigarettes don’t degrade you. They kill you, but you’re still you.”

I noted that this idea, which had seemed extreme two and half years ago, appeared to just now be arriving in the mainstream, where Mark Zuckerberg was increasingly regarded as a villain, and advertisers had begun boycotting Facebook in disgust, citing its deleterious effects on democracy. Congress was holding hearings about the monopoly power of Facebook and Google, questioning the outsize influence they increasingly wielded over every aspect of society. And it seemed like more and more people I knew were quitting Twitter—the toxicity had long since begun to outweigh whatever distraction or joy the activity provided. This may have been obvious to Lanier in 2018, I said—he seemed to live somewhere off ahead of us, by the horizon. Now here the rest of us were too.

But all that was only part of the reason I had sought out Lanier, I told him. What I really hoped to do, I said, was to talk about the future and how to live in it. This year feels like a crossroads; I do not need to explain what I mean by this. We are on the precipice of ruin or revolution or both. We are sick of looking at social media, but social media is also maybe driving the most significant and necessary social movement of my entire life. I want to destroy my computer, through which I now work and “have drinks” and stare at blurry simulations of my parents sometimes; I want to kneel down and pray to it like a god. I want someone—I want Jaron Lanier—to tell me where we’re going, and whether it’s going to be okay when we get there.