When Free Choice Is An Illusion

by Susana Martinez-Conde: We think we know what we want—but do we, really? 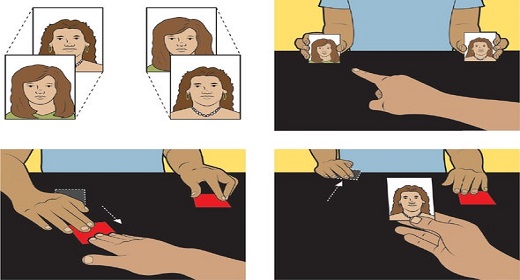 In 2005 Lars Hall and Petter Johansson, both at Lund University in Sweden, ran an experiment that transformed how cognitive scientists think about choice. The experimental setup looked deceptively simple. A study participant and researcher faced each other across a table. The scientist offered two photographs of young women deemed equally attractive by an independent focus group. The subject then had to choose which portrait he or she found more appealing.

Next, the experimenter turned both pictures over, moved them toward the subjects and asked them to pick up the photo they just chose. Subjects complied, unaware that the researcher had just performed a swap using a sleight-of-hand technique known to conjurers as black art. Because your visual neurons are built to detect and enhance contrast, it is very hard to see black on black: a magician dressed in black against a black velvet backdrop can look like a floating head.

Hall and Johansson deliberately used a black tabletop in their experiment. The first photos their subjects saw all had black backs. Behind those, however, they hid a second picture of the opposite face with a red back. When the experimenter placed the first portrait face down on the table, he pushed the second photo toward the subject. When participants picked up the red-backed photos, the black-backed ones stayed hidden against the table’s black surface—that is, until the experimenter could surreptitiously sweep them into his lap.

The first surprise was that the image switches often went undetected: Hall and Johansson reported that their subjects realized that the photo they picked up was not their actual choice only 26 percent of the time. Then came an even bigger shock. When the researchers asked the participants to explain their selection—remember, they chose the other picture—they did not falter: “She’s radiant. I would rather have approached her at a bar than the other one. I like [her] earrings!” a subject said, even though the woman he actually chose had no earrings. Pants on fire.

Over and over, the participants made up just-so stories to account for their nonchoices. Instead of pondering their picks first and then acting on them, the study subjects appeared to act first and think later. Their improbable justifications indicate that we can use hindsight to determine our own motives—just as we might speculate about what drives someone else’s behavior after the fact. In their now classic paper, Hall and Johansson dubbed this new illusion “choice blindness.”

Choice blindness reveals that not only are our choices often more constrained than we think, but our sense of agency in decision making can be a farce in which we are the first to deceive ourselves. Here we present a few other examples.

In a subsequent experiment, published in 2013, Hall and Johansson set out to change political attitudes during a general election in Sweden using choice blindness techniques. Study participants stated their voting intentions for the upcoming election and filled out a survey, revealing their attitudes toward hot-topic issues under debate by Sweden’s left- and right-wing coalitions. Then the researchers once more used sleight of hand to alter the respondents’ replies, presenting them with the opposite political views to their own. When invited to explain these doctored survey responses, 92 percent of the participants accepted and endorsed them! Moreover, almost half of the respondents indicated a willingness to consider changing their vote, based on the manipulated results—a much higher percentage than the 10 percent of voters who were prone to swing according to established political polls.