by Michael Marshall: In a few scrawled notes to a friend, biologist Charles Darwin theorized how life began. Not only was it probably correct, his theory was a century ahead of its time… 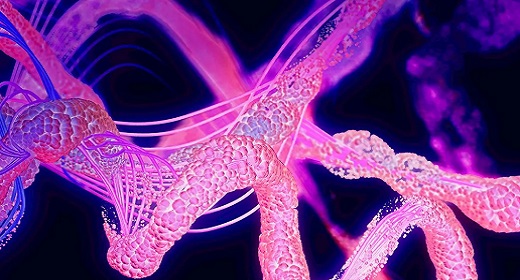 harles Darwin had some rather good ideas. His most famous is the theory of evolution by natural selection, which explains much of what we know about life on Earth. But he also pondered many other questions. In a hasty letter to a friend, he put forward an idea about how the first life might have formed. Some 150 years later, that letter looks remarkably prescient – maybe even prophetic.

Contrary to popular belief, Darwin was not the first to propose that species evolve. The idea that animal populations change over time, so that for instance giraffes today have longer necks than their distant ancestors, was much discussed in the 1800s.

Instead, Darwin’s key contribution was to outline a mechanism for evolution: natural selection. The idea is that animals in a species are competing with each other for food, shelter, and ultimately the ability to reproduce. Only the fittest, meaning those who are best suited to their environment, will succeed in reproducing, and so their beneficial traits will be passed on to the next generation and become more common. So, if having a long neck is helpful for giraffes, over generations the giraffes with longer necks will proliferate until the optimum length neck is reached. Darwin set this out in his 1859 opus On the Origin of Species.

The fact of evolution implied something about how life began. Evolution tells us that seemingly distinct species are distant relatives, both descended from a single shared ancestor. For example, our closest living relatives are the chimpanzees: the common ancestor we share lived at least seven million years ago.

What’s more, every living organism is ultimately descended from a single ancestral population: the Last Universal Common Ancestor (Luca), which lived over 3.5 billion years ago when the planet was newly formed.

However, the theory of evolution tells us nothing about how the first life formed: it only tells us how and why existing life changes.

How did life begin?

Research into the origin of life didn’t kick off until the 1950s. By then many scientists suspected that life began in the oceans. The idea was that many carbon-based chemicals formed on the young Earth and dissolved in the ocean, which became thick and concentrated: the so-called “primordial soup”. This was proposed in the 1920s by a Soviet biologist named Alexander Oparin. In 1953, a young American student named Stanley Miller showed that amino acids, the building blocks of proteins, could form in a simple apparatus that mimicked the primordial ocean and atmosphere.

Charles Darwin expounded his theory in a few short notes in a letter to a friend in 1871 (Credit: Getty Images)

The idea that life began in the ocean held sway for decades, but there was an obvious problem. The oceans are huge, so unless carbon-based chemicals were made in staggering quantities, they might drift around for years and never meet. “You would have just so much water and too few molecules,” says Claudia Bonfio of the MRC Laboratory of Molecular Biology in Cambridge, UK.

One much-discussed alternative is that life could have begun in alkaline vents like those of Lost City in the mid-Atlantic. There, hot and mineral-rich water from beneath the sea floor oozes up through the rocks and forms eerie white spires. The vents are a rich source of chemical energy which could have fuelled the first organisms. But according to a review published in May 2020, “the direct synthesis of amino acids or nucleobases” – both of which are crucial to life as we know it – has “not yet been demonstrated” under alkaline vent conditions.

That takes us back to Darwin.

A letter to a friend

Darwin never wrote about how life began in his books, but he did speculate about it in private. The key document is a letter he wrote, dated 1 February 1871, to his close friend the naturalist Joseph Dalton Hooker. This letter is now almost 150 years old. It is short – just four paragraphs – and hard to read because of Darwin’s spidery handwriting. In it, after a brief discussion of some recent experiments on mould, Darwin outlined the beginnings of a hypothesis:

“It is often said that all the conditions for the first production of a living organism are now present, which could ever have been present. But if (and oh what a big if) we could conceive in some warm little pond with all sorts of ammonia and phosphoric salts, light, heat, electricity etc. present, that a protein compound was chemically formed, ready to undergo still more complex changes, at the present day such matter [would] be instantly devoured, or absorbed, which would not have been the case before living creatures were formed.”

Darwin was proposing that life began, not in the open ocean, but in a smaller body of water on land

This takes a bit of unpacking, partly because several ideas are jammed together: it reads as if Darwin was thinking his hypothesis through even as he wrote it down. But the core idea is simple enough.

Darwin was proposing that life began, not in the open ocean, but in a smaller body of water on land, which was rich in chemicals. This is in essence the primordial soup idea, but with one advantage: in a pool, any dissolved chemicals would become concentrated when water evaporated in the heat of the day. The initial synthesis of the chemicals of life would be powered by some combination of light, heat and chemical energy.

In many ways Darwin’s idea is hopelessly incomplete, but he cannot be faulted for that. He was writing before the discovery of nucleic acids like DNA, before biologists understood anything about how genes work, and when the internal workings of living cells were largely a mystery. Darwin imagined that life began with a protein, but nobody really knew what proteins were: not until 1902 was it understood that proteins are chains of amino acids.

Pools may have been the breeding ground, as the chemical building blocks of life would be concentrated as water evaporated during the day (Credit: Getty Images)

But the same basic outline is still being pursued today, and many researchers are convinced that it is the best explanation we have of life’s origin.

One researcher whose work is compatible with a pond environment is Lena Vincent of the University of Wisconsin-Madison – although she prefers to keep an open mind. She is trying to create sets of chemicals that copy themselves as a group. The simplest example would be a pair of chemicals A and B, where each has the ability to make the other, so A makes B and B makes A. Such a pair of chemicals would be able to self-replicate, even though neither could do so alone. In practice the sets of chemicals are more complicated than that, but the principle is the same.

Crucially, Vincent carries out her experiments on the surfaces of minerals. If the key chemicals are on the mineral surface, “they’re more likely to react and come in contact with one another,” she says. The chemicals can also compete to attach to the mineral. “We think that can create the kind of environment you would need to start to see a competitive advantage and maybe the precursors of evolution.” Ponds, by their nature, are surrounded by mineral surfaces such as clays.

There is also a lot of evidence that the ultraviolet radiation in sunlight can drive the formation of key biological chemicals – especially RNA, a nucleic acid similar to DNA thought to have been a crucial component in creating the first life. Such processes could only happen in well-lit places – which again points to a small body of water rather than the deep sea.

A key player has been John Sutherland of the MRC Laboratory of Molecular Biology in Cambridge, UK. In 2009 he demonstrated that two of the four building blocks of RNA form from simple carbon-based chemicals, if they are subjected to simple treatments like being bathed in ultraviolet radiation. He has since shown that the same starter chemicals, given subtly different treatments, can also become the building blocks of proteins, or of the fatty lipids that make up the outer membranes of cells.

“He’s steadily moving towards a complete scenario for synthesis of long complex nucleic acids,” says Kate Adamala of the University of Minnesota in Minneapolis.

Finally, pools on land can periodically dry out almost entirely when it gets hot, then fill up again when it rains. Such wet-dry cycles may seem innocuous, but they can have profound effects on the chemicals of life.

For instance, Sutherland’s 2009 experiment only made two of the four building blocks of RNA. In 2019, researchers in Germany made all four at once. They placed simple carbon-based chemicals in hot water on a mineral surface and subjected them to repeated wet-dry cycles. A few days of this was enough to make the RNA building blocks.

Similarly, David Deamer of the University of California, Santa Cruz has shown that wet-dry cycles can drive the formation of simple “protocells”, in which a biological molecule like RNA becomes encapsulated in a shell of fatty lipids. And in 2017 Valentina Erastova, now at the University of Edinburgh, found that amino acids link up into simple proteins on a mineral surface subjected to wet-dry cycles.

The cradle of life

Deamer argues that “fluctuating volcanic hot spring pools” are the most likely environment for life to get started. Sutherland has an alternative: a meteorite crater, with streams running down the sides and meeting in a pool at the bottom. It is unclear which of these scenarios is more plausible. Furthermore, many younger researchers make a point of not committing themselves to one scenario or another, arguing that we do not yet know enough about the processes that can give rise to life to rule anything out. In particular, many researchers still take the alkaline vent hypothesis seriously despite its problems.

What is clear, however, is that Darwin’s idea was far-sighted. He envisioned the need for a range of chemicals to become concentrated in a small space, and the need for an energy source that could drive chemical reactions.

“Just like many of Darwin’s insights,” says Vincent, the warm little pond hypothesis was “very prescient”.

Darwin made one other point in his letter, which is “underappreciated”, says Vincent. “The processes that happen in that warm little pond might happen so easily that they happen all the time,” she says. We may not see it simply because, whenever a new protein or similar forms naturally, a hungry bacterium gobbles it up.