by Himanshu Joshi: The Sanskrit word Aṣṭāṇga, is a compound comprising of two words: Aṣṭa (eight) and Aṇga (limbs)… 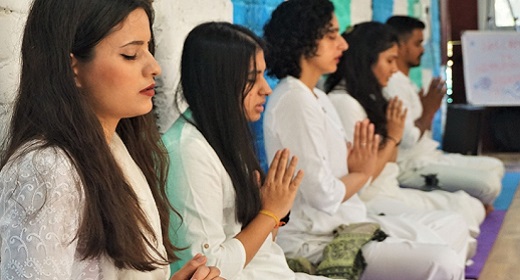 In his Yoga Sūtras, Patañjali lays out 8 steps that a seeker is ideally meant to follow in chronological order. The Sanskrit names for the 8 limbs are Yama, Niyama, āsana, prāṇāyāma, pratyāhāra, dhāraṇa, dhyāna, samādhi. According to Swami Satyananda Saraswati, the translation for the 8 limbs is as follows: Self-restraints, fixed rules, postures, breath-control, sense-withdrawal, concentration, meditation and samādhi. The first four limbs constitute the external aspects (bahiraṇga), whereas the last four limbs form the internal aspects (antaraṇga). Bahiranga refers to the aspects of yoga that is practiced in relation to the body, society and external things outside of oneself. In the final four stages, the seeker goes deeper within one’s Self and naturally, switches off from the sensory world.

Ahiṃsā– When one acknowledges that there is divinity embedded in everything, one will naturally abstain from hurting another creature. That constant reminder that divinity pulsates within everything is the foundation of any Sādhana. Needlessly to say, that feeling of love and kindness would then intrinsically extend to animals and plants as well.

Satya – Satya comes from the root sat –which means true being, essence; that which really is. In this case, Satya refers to truthfulness in thought, speech and action. Swami Satyananada Saraswati beautifully explains, that through the practice of truthfulness, we develop a special power within ourselves. Because of this power, the mind becomes clear like a mirror that it reflects what is to happen through our speech. Thus the result of any action is dependent upon us, not on change or prārābdha.

Brahmacarya – Swami Satyananda Saraswati explains that Vīrya creates vitality; It is the essence of life which ultimately converts itself into energy. Vīrya also means indomitable courage, which is essential for sādhana. Thus, when firmly established in Brahmacarya, the yogi gains vigour, energy and courage, whereby he becomes free of the fear of death. As a woman however, I cannot relate to the practice of converting semen into Ojas. However, I do believe that the concept of Brahmacarya does not solely refer to the physical, tangible aspects. It is as natural and common for women to have sexual thoughts too. These thoughts could be distracting during the practice of yoga or meditation. By gently allowing the thoughts to pass and not giving energy or attention to them, one could usher in a sense of peace and detachment. But, I think it helps to have the humility to honour that we are natural human beings with desires, and then make our choices for a more conducive spiritual journey.

Aparigraha – Non-acquisitiveness is not taking for oneself the objects of senses, because one knows the burden of having possessions.

Śauca – Cleanliness involves both the external (maintaining a good personal hygiene) and internal (cleansing the impurities of the mind).

Santoṣa – When enmeshed in desires and aspirations, the seeker may find it difficult to go deep in meditation without allowing anxieties to dissuade him/her.

Tapas– Tapas comes from the root tap– to give out heat, practice austerities. Through relentless practice, one acquires the ability to endure extremes. In the Kumārasambhava, the 5th chapter is dedicated to the Tapas of Pārvatī, in which she endures the extreme temperatures on the Himālayas in order to meditate and know the Self.

Svādhyāya – According to Patañjali, though self-observation, union with the desired deity is brought about. Sri Ramana Maharishi’s main teaching is to practice until one finds the true nature of the Self as Awareness. Another interpretation for Svādhyāya is recitation, which involves the repetition of mantras like OM and the Gāyatri Mantra.

Īśvarapraṇidhāna – When one surrenders everything to the Lord, she/he is able to do yoga with a deeper awareness and with complete serenity. This involves the relinquishment of all fruits of action, and dedication of one’s thoughts and actions to the Supreme.

As discussed in the third question, Āsana was never the end-goal of yoga. It was a pre-requisite for the seeker to cultivate a healthy body that endures during her/his meditation. Therefore, Patañjali says, “sthirasukham āsanam.” (Posture is that which is firm and comfortable.) The Pātañjala-Yoga-Sūtra-Vivaraṇa mentions Padmāsana, bhadrāsana, daṇḍāsana, paryañkāsana (couch pose), etc as possible āsanas that the yogi could adopt for meditation.

In more recent times, more dynamic forms of yoga were devised. Perhaps, before mechanisation, more manual labour was required for people’s daily tasks. So the tasks themselves sufficed in maintaining a person’s strength and flexibility. However, with mechanisation, we have adopted a more sedentary lifestyle, which forces us to stare at the computer screen for hours. Not only do we lack the physical capacity to sit for hours, we also lack the patience – a result of our reduced attention spans. Therefore, the practice of Āsanas have become even more important today so that we could build the stamina to sit with our spine upright during meditation.

Having done (the asana), Prāṇāyāma is the control of inhalation and exhalation.

Pratyāhāra refers to “withdrawal from the senses.” It is derived from two Sanskrit words- Prati (away from) and āhāra (food/nourishment). It is the first of the antaraṇgas, as it constitutes the initial stage of the Yogi retracting from her/his habitual engagement with the sensory world. Perhaps the reason for Pratyāhāra immediately following Prāṇāyāma boils down to the intricate interconnection between the breath and the mind.

Fixation is the locking of the mind at one point.

The Yoga Sūtra does not define what the point is. The commentary lists several suitable focuses like the nābhicakra (navel), hṛdayapuṇḍarīka (heart-lotus), mūrdhi-jyotis (the light in the head), nāsikāgra (tip of the nose), jihvāgra (tip of the tongue), etc. Tantric fixation, however, involves a sequential visualisation of the elements (tattvas or bhūtas) (Mallinson, p286). In a Buddhist text known as Satipaţţhāna Sutta, the monk is asked to fix his mind upon the elements that his body contains. In Trāṭaka meditation, we fix our mind on the candle-flame.

Meditation is the continuity of cognition on that (object of fixation).

When the seeker meditates on the object of focus, unmoved by any other cognition, she/he peels off the different layers of unreality. The Muṇḍaka Upaṇiṣad provides this beautiful description on the meditating person:

“It is not through the eyes that it is perceived, nor by the voice, nor by other senses, nor by asceticism, nor by action. It is by the grace of knowledge that a person whose being has been purified sees that which is undivided during meditation.” (Mallinson, p302)

When (in meditation), forms are emptied and only the essence appears, that state is samādhi.

It is difficult to express the state of Samādhi as it is meant to be experienced. Nonetheless, Swami Vivekananda provides an analogy of reading a book. When we meditate on a book and succeed in concentrating the mind on it, and perceive only its internal sensations- the meaning, unexpressed in any form, that state of Dhyāna is called Samādhi. In Vedantic philosophical traditions, samādhi is defined as the merger of the ātman with the paramātman. In the Parākhyatantra, samādhi is defined as the absorption of the self into the supreme reality (14.16).