by Rebecca Solnit: The Four Horseman of My Apocalypse are called Efficiency, Convenience, Profitability, and Security, and in their names, crimes against poetry, pleasure, sociability, and the very largeness of the world are daily, hourly, constantly carried out… 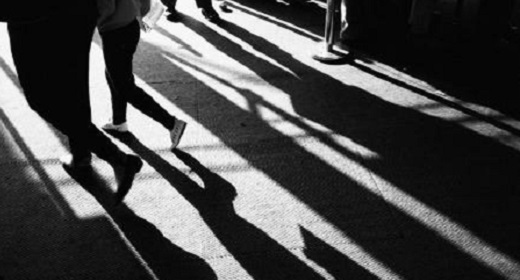 These marauding horsemen are deployed by technophiles, advertisers, and profiteers to assault the nameless pleasures and meanings that knit together our lives and expand our horizons.

I’m listening to a man on the radio describe how great it is that there are websites where musicians who have never met or conversed or had any contact at all can lay down tracks together to make songs. While the experiment sounds interesting, the assumption sounds scary — that the complex personal, creative, and cultural collaborations of music-making could be unnecessary and you just need the digital conjunction of some skill sets. The speaker seems to believe that the sole goal is the production of songs, sundered from the production of social ties and social pleasure. But music has always been an occasion for people to get together — in rehearsals, nightclubs, parties, festivals, park band-shells, parades, and other social spaces. It is often the soundtrack to bodies in conjunction, whether marching or making love.

Ensemble music made in solitude is a very different thing; as a norm it signifies a loss. The loss is subtle and hard to describe, especially compared to the wonders of what can be uploaded, downloaded, and Googled, and the convenience and safety of never leaving your house or never meeting a stranger. The radio rave comes a few days after I talk to a book editor who’s trying to articulate what goes missing when you go to Amazon.com for books: the absence of the opportunities for browsing, for finding what you don’t know you’re looking for or can’t describe in a key-word search. A digital storefront can lead you to your goal if you know exactly how to spell it, but it shows you next to nothing on the way; it prevents your world from getting significantly or surprisingly larger. The virtual version rips out the heart of the thing, shrink-wraps it, sticks a barcode on, and throws the rest away. This horseman is called Efficiency. He is followed by the horseman called Profitability. Along with Convenience, they trample underfoot the subtle encounters that suffuse a life with meaning.

The problem is partly one of language. The language of commerce has been engineered to describe the overt purpose of a thing, but cannot encompass fringe benefits or peripheral pleasures. It weighs the obvious against what in its terms are incomprehensible. When I drive from here to there, speed, privacy, control, and safety are easy to claim. When I walk, what happens is more vague, more ambiguous — and in many circumstances much richer. I am out in the world. It’s exercise, though not so quantifiably as on a treadmill in a gym with a digital readout. It’s myriad little epiphanies and encounters that knit me more tightly into my place and maybe enhance the place overall. The carbon emissions are essentially nil. Many more benefits are more subjective, more ethereal — and more wordy. You can’t describe them in a few familiar phrases; and if you’re not practiced at describing them, you may not be able to articulate them at all. It is difficult to value what cannot be named. Since someone makes money every time you buy a car or fill it up, there’s a whole commercial language built around getting us to drive; there’s little or no language promoting the free act of walking. Have you not driven a Ford lately?

Even the idea of security illustrates the constant conflict between the familiar and the intricate. When I drive, I have a large steel and glass carapace wrapped around me and my contact with other human beings is largely limited to colliding with their large metal carapaces at various speeds or their unbuffered bodies in crosswalks. Fifty thousand or so people a year are killed by cars in this country, but its citizens officially believe that safety lies in the lack of contact that cars offer. Walkers make a place safer for the whole community — what Jane Jacobs called “eyes on the street” — and in turn become more street-smart themselves. Too, safety is a reductive term for what being at home in the world or the neighborhood can provide. This is a more nebulous kind of security, but a deeper and broader one. It is marked by expansiveness, not defensiveness.

Walking versus driving is an easy setup, but the same problem applies to most of the technological changes we embrace and many of the material and spatial ones. The gains are simple and we know the adjectives: convenient, efficient, safe, fast, predictable, productive. All good things for a machine, but lost in the list is the language to argue that we are not machines and our lives include all sorts of subtleties — epiphanies, alliances, associations, meanings, purposes, pleasures — that engineers cannot design, factories cannot build, computers cannot measure, and marketers will not sell. What we cannot describe vanishes into the ether, and so what begins as a problem of language ends as one of the broadest tragedies of our lives.

This is most manifest in the life of the suburban commuter who weekly spends a dozen or more hours on the road between the putative dream house and the workplace, caught in the gridlock of tens of thousands likewise trying to move from the residential-warehousing periphery to the economically productive inner rings. Space is quantifiable and we are constantly taught to covet it (though leisure is advertised too — mostly as vacation packages). You can own those two thousand square feet including two-car garage, and it is literally real, the real in real estate. But to have this space you give up time, the time that you might be spending with the kids who are housed in the image of domestic tranquility but not actually particularly well nurtured by their absentee parents, or time spent immersed in community life or making things with your own hands or doing nothing at all — a lost art. You give up time, and you often give up the far more than two thousand square feet that you don’t own but get to enjoy when you live in, say, a rented apartment in a neighborhood full of amenities nobody advertised to you, because you don’t have to buy the public pool or playground that your kids don’t need to be driven to. The language of real-estate ownership is loud, clear, and drilled into us daily; the language of public life and leisure time is rarer and more complex.

People elsewhere are better at this language. At a certain fork in the road of automatization, Europeans chose to have more time, and they work far less than we do and get much longer vacations. We chose to have more stuff, the stuff sold to us through those beckoning adjectives — bigger, better, faster: Jet Skis, extra cars, second homes, motor homes, towering slab TVs, if not the time to enjoy them or to enjoy less commodified pleasures. These may be the wages of inarticulateness.

The conundrum is that the language to describe the ineffable splendors and possibilities of our lives takes time to master, takes a certain unhurried engagement with the tasks of description, assessment, critique, and conversation; that to speak this slow language you must slow down, and to slow down you must have some inkling of what you will gain by doing so. It’s not an elite language; nomadic and remote tribal peoples are now quite good at picking and choosing from development’s cascade of new toys, and so are some of the cash-poor, culture-rich people in places like Louisiana. Poetry is good training in speaking it, and skepticism is helpful in rejecting the four horsemen of this apocalypse, but they both require a mind that likes to roam around and the time in which to do it.

Ultimately, I believe that slowness is an act of resistance, not because slowness is a good in itself but because of all that it makes room for, the things that don’t get measured and can’t be bought.