Mindfulness Beyond The Moment 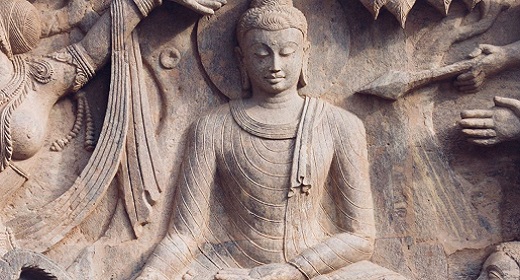 As you progress in sustained, daily practice, it might be helpful to have an overview of meditative insight. Of course, there are many maps of the spiritual journey, and what follows is simply one way of highlighting some different aspects of the path.

Often people think of mindfulness as present moment awareness—living in the present moment, rather than being lost in thoughts of past and future. And while this is certainly a necessary prerequisite for mindfulness, it is not enough. It is possible to be fully in the moment and still be completely lost in whatever the experience might be.

For example, there is something I call “black Lab consciousness.” You may be familiar with black Labrador Retrievers. They are immensely playful, friendly dogs, who seem to be very much in the moment, lost in their worlds of sight and sound and smell. It doesn’t seem that they are ruminating about the past or future, but at the same time, they don’t appear to be at all mindful.

Dogs don’t seem that they are ruminating about the past or future, but at the same time, they don’t appear to be mindful.

For much of the time, our own minds are in a similar situation. Even if we’re not lost in thought, we may not be mindfully observing what is arising. Here, there is an important distinction between attention and mindfulness. How many times during the day do we hear sounds or see sights without the meta-cognition of knowing that we’re hearing or seeing? We’re simply lost in the experience, much like a black Lab. Attention allows us to know the object, but without necessarily opening to its nature (or to the knowing itself) on a deeper level. The Portuguese poet, Fernando Pesoa, described this well:

In order to accomplish the understanding of reality, mindfulness also has an ethical component, which is knowing our experience without the often unnoticed filters of greed and aversion.

The beginning of practice—and throughout our entire journey—we remind ourselves to actively notice what it is we’re experiencing and, at the same time, to be aware of any attitude in the mind regarding it. The difference between being lost in a present moment experience and being mindful of it is very obvious every time we wake up from being lost in a thought. Just there, in that moment of transition, we can feel the difference between the deluded mind of non-awareness and the wakeful quality of mindfulness.

At first, it may feel quite effortful to remember to be mindful. But as the momentum of our practice grows, there may be more space between thoughts and more awareness of whatever is arising in our bodies, our minds, or in the external environment. And at a certain point, a level shift takes place. While we’re still aware of what is arising, there is an even greater awareness of the process of change itself. It’s as if we have shifted the emphasis of awareness from content to process. Here, experience flows on more smoothly, and mindfulness seems to be happening by itself. We still get lost, but our minds return more effortlessly to being mindful of the flow of phenomena.

This shift can be illustrated by the images of an arch and a trough. At first, it’s as if we’re balancing at the top of an arch, often falling off to one side or another and requiring an effort to climb back up to the top. But through that effort, at some point the arch inverts to become a trough, where we’re simply resting at the bottom. We still may be pulled off center, that is, getting lost in various momentary experiences, but then quite effortlessly, the mind settles back into balance, into the flow of changing phenomena.

An important insight begins to emerge at this stage of practice. We begin to be clearly aware of two different but unified aspects of all experience: that is, in each moment we see the wise progression of knowing and object, arising and passing away together. Usually, the object is more predominant, but at times we can also emphasize the knowing aspect. We might understand this in terms of foreground and background. At times, there will be a natural interweaving of the two, and at other times we can choose to give emphasis to one or another, still remembering that they always arise together. For example, we might be feeling the sensations of the breath quite intimately and then it’s as if we put these sensations to one side (or let them recede into the background) and rest more in the awareness itself.

For those exploring this aspect of practice, the question may arise, “How can I be more mindful of the knowing?”  While it will come naturally as we continue our meditation, there is one linguistic re-framing that I found to be extremely helpful in this regard. Usually, we describe experience, either consciously or unconsciously, in the active voice, with a subject, a verb and some object. “I’m knowing a sound” or “I’m knowing a movement.” If we reframe these experiences in the passive voice—“a sound being known” or “a movement being known”—we have taken the “I” out of the equation. The actor is no longer the subject and we can see how effortlessly the knowing arises in every moment, without an “I” making the effort.

It’s very simple. As an experiment, just now, you might move your arm back and forth, noticing how effortlessly the movement is being known. Of course, the mind will still wander from time to time, but we can always come back to the simplicity of things being known moment after moment. Because of this effortless quality, it’s easier to rest in the knowing aspect, even for short periods of time, again remembering that we’ll also be aware of what’s being known at the same time.

Another important understanding happens when we notice the tendency to lean into the next moment—what I call the “in order to” mind. We may be with a strong sensation in order for it to diminish, or with an emotion in order for it to go away, or even being with an in breath but already leaning into the arising of the out breath. This is one aspect of what the Buddha called “craving for becoming.”

We can taste one dimension of freedom in those moments when we’re not leaning, not wanting to become. On this fundamental, moment to moment level, the mind is free of craving…for anything. In the morning of the Buddha’s enlightenment, it’s said that a verse came to his mind, expressing the depth of his awakening. The last two lines of that verse say, “Realized is the unconditioned, achieved is the end of craving.”

This is a reminder that the essence of our practice is non-craving—the Third Noble Truth of the Buddha’s teaching: the end of suffering. And although for us, the end of craving might at first be momentary, it does give a real taste of peace.