A Healing Tool That Many Have Forgotten.

by Nick Polizzi: Have you ever had a strange feeling that… 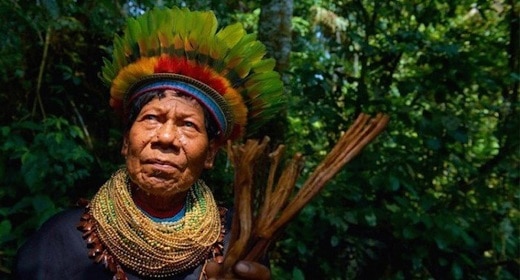 …that ended up being spot-on?

If you asked most Western medical doctors what role they felt intuition plays in modern medicine, you might find a few that recognized its value, but the majority would tell you that intuitive healing is a hoax. After all, intuition is about as conventionally accepted by science as ESP, seeing the future, or out-of-body experiences, right?

I used to feel the same way until an experience I had eight years ago reshaped the way I understood these kinds of unexplainable phenomena.

We were in Aspen, CO, shooting an interview with Bob Proctor, a living legend in the field of personal growth and achieving happiness. One of the final questions we asked him was, “How do one’s fears and anxieties limit the infinite potential that each of us possess inside of us?” Bob’s response was something that my friends and I still talk about to this day.

“First off, most of us don’t even know who we are.”, Bob began. “You’re Nick and I’m Bob, but those are just names that we were given. Who are you, really?  Once we get past the surface of who we THINK we are, the number of abilities we can access are terrifyingly infinite.”

Then he gave us a little demonstration.

“For example, I can tell you who you are just by looking at your face. Does this sound crazy? It’s not. We’ve dumbed ourselves down so much that most of us have forgotten half of the senses we were born with.” Bob then proceeded to work his way around the room and give us the lowdown on who we each were at our core essence, which was not the most comfortable process.  There were about 6 of us there, including a few well known “gurus” in the field of superfood nutrition and energy healing, plus our film crew. And yes, he was dead on with each of his 10 second assessments, although he had never met any of us prior to that day.

The most memorable of these “scans” was Proctor’s assessment of one of the other wellness celebrities in the room, who I will not name here. This outwardly gregarious figure had been waiting his entire life to meet Bob and was already sitting mesmerized in the corner of the room, watching with awe as he made his rounds. Proctor then turned to him and said, “You. People love you because of your pioneering spirit and the passion with which you speak to large and sometimes even unfriendly audiences. You are amazing with words and inspire people to take action. But, what most people don’t know is that you are actually an extremely shy, introverted person. You would much rather be alone in your garden than in the public eye.” Our friend’s face went flush as he nodded with a sheepish grin.

One of the many lessons learned that day: Never underestimate the gifts we are born with.

Here are a few tips if you’re interested in tapping into some of what Bob Proctor showed us:

First, the unconscious mind (where intuition comes from) is not linear like its conscious (or rational) counterpart. We’re quite accustomed to the logical mind’s computer-like approach to navigating the world, but the intuitive mind operates on entirely different principles.  Time and space, for example, have no bearing on the non-linear behavior of intuitive thought.  With practice, connections to our past, present, and future can be made in an instant, resulting in an instant “knowing” of the person, place or thing we are focussing on.

The notion of intuition or “the direct perception of truth, fact, etc., independent of any reasoning process” is almost too much for the rational brain to comprehend. We’ve spent so much of our lives depending solely on a logic-driven guidance system that our more subtle, intuitive “sixth sense” has all but disappeared.

But like a muscle, this gift can be strengthened over time using a few techniques:

1 – Write it down. Your unconscious mind has plenty to tell you, but it needs to be acknowledged. Keeping a journal or log of the peripheral messages that you receive on a daily basis will encourage your intuition to speak up more often and much more clearly.

2 – Allow your inner voice to show itself. Often we are too embarrassed or ashamed to let certain thoughts or emotions show themselves, even in the solitude of our own minds. This is especially true of the more traumatic or limiting ones – and these are the exact areas we need to focus on if we want to heal.

3 – Create or find a space where you can go into a deep meditative state. Have you ever walked into a room or forest clearing and felt a welcoming tingle down your spine? This is the kind of sensation you want to feel when you walk into your own sacred space. This is your workshop and your chapel. Choose it wisely.

These three simple practices are a great place to start. Once you’ve begun honing this skill, you will probably find that your own intuition will guide you to the next steps. That’s how it unfolded for me.