by Antonio Regalado: Funders of a deep-pocketed new “rejuvenation” startup are said to include Jeff Bezos and Yuri Milner… 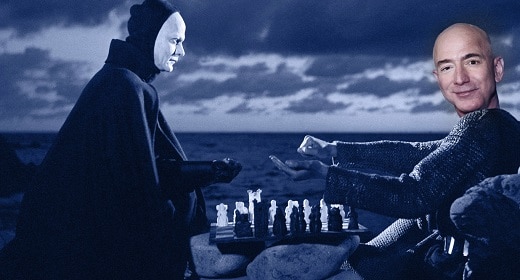 Last October, a large group of scientists made their way to Yuri Milner’s super-mansion in the Los Altos Hills above Palo Alto. They were tested for covid-19 and wore masks as they assembled in a theater on the property for a two-day scientific conference. Others joined by teleconference. The topic: how biotechnology might be used to make people younger.

Milner is a Russian-born billionaire who made a fortune on Facebook and Mail.ru and previously started the glitzy black-tie Breakthrough Prizes, $3 million awards given each year to outstanding physicists, biologists, and mathematicians. But Milner’s enthusiasm for science was taking a provocative and specific new direction. As the scientific sessions progressed, experts took the stage to describe radical attempts at “rejuvenating” animals.

That meeting has now led to the formation of an ambitious new anti-aging company called Altos Labs, according to people familiar with the plans. Altos is pursuing biological reprogramming technology, a way to rejuvenate cells in the lab that some scientists think could be extended to revitalize entire animal bodies, ultimately prolonging human life.

The new company, incorporated in the US and in the UK earlier this year, will establish several institutes in places including the Bay Area, San Diego, Cambridge, UK and Japan, and is recruiting a large cadre of university scientists with lavish salaries and the promise that they can pursue unfettered blue-sky research on how cells age and how to reverse that process.

Some people briefed by the company have been told that its investors include Jeff Bezos, the world’s richest person, who stepped down as CEO of Amazon in July and weeks later risked his life by jumping into a rocket capsule to reach outer space. Technology Review confirmed that Milner and his wife Julia have invested in Altos through a foundation.

Altos is certain to draw comparisons to Calico Labs, a longevity company announced in 2013 by Google co-founder, Larry Page. Calico also hired elite scientific figures and gave them generous budgets, although it’s been questioned whether the Google spinout has made much progress. Calico has also started a lab whose focus is reprogramming; it published its first preprint on the topic this year.

Among the scientists said to be joining Altos are Juan Carlos Izpisúa Belmonte, a Spanish biologist at the Salk Institute, in La Jolla, California, who has won notoriety for research mixing human and monkey embryos and who has predicted that human lifespans could be increased by 50 years. Salk declined to comment.

Also joining is Steve Horvath, a UCLA professor and developer of a “biological clock” that can accurately measure human aging. Shinya Yamanaka, who shared a 2012 Nobel Prize for the discovery of reprogramming, will be an unpaid senior scientist and will chair the company’s scientific advisory board.

Yamanaka’s breakthrough discovery was that with the addition of just four proteins, now known as Yamanaka factors, cells can be instructed to revert to a primitive state with the properties of embryonic stem cells. By 2016, Izpisúa Belmonte’s lab had applied these factors to entire living mice, achieving signs of age reversal and leading him to term reprogramming a potential “elixir of life.”

The results of such mouse experiments, while tantalizing, were also frightening. Depending on how much reprogramming occurred, some mice developed ugly embryonic tumors called teratomas, even as others showed signs their tissues had become younger.

“Although there are many hurdles to overcome, there is huge potential,” Yamanaka said in an email, in which he confirmed his role in Altos.

It’s been said that young people dream of being rich, and rich people dream of being young. That paradox is one that people like Milner, age 59, and Bezos, who is 57 years old, may feel acutely. Forbes currently ranks Bezos as the world’s richest person, with a net worth of around $200 billion. Milner’s wealth is estimated at $4.8 billion.

Bezos Expeditions, the investment office of Amazon’s founder, did not reply to an email seeking comment.

People familiar with the formation of Altos say that initially Milner’s interest in reprogramming was philanthropic. After the meeting at his home, a non-profit called the Milky Way Research Foundation sponsored by Milner awarded three-year grants, of $1 million a year, to several longevity researchers. The proposals were considered by an advisory board including Yamanaka and Jennifer Doudna, who shared a Breakthrough Prize in 2015 and later a Nobel in 2020 for her co-discovery of CRISPR genome editing.

Sometime during 2021, however, a new plan emerged to make the research move even faster by turning the idea into a well-funded company that is now Altos. That effort took shape under the direction of Richard Klausner, the one-time chief of the National Cancer Institute and now an entrepreneur. Klausner, who previously helped start companies like Juno Therapeutics and cancer-test company Grail, is known for organizing large, and lucrative, financial bets on new biotechnologies.

According to an incorporation filing in the UK for Altos Labs, Klausner is CEO of the new company. Klausner did not respond to attempts to contact him by email and phone. Like Milner, he also lives in Los Altos Hills.

A number of startups are pursuing reprogramming technology, including Life Biosciences, Turn Biotechnologies, AgeX Therapeutics, and Shift Bioscience in the UK, although these efforts have not yet led to any treatments tested on people in clinical trials.

“There are hundreds of millions of dollars being raised by investors to invest in reprogramming, specifically aimed at rejuvenating parts or all of the human body,” says David Sinclair, a researcher at Harvard University who last December reported restoring sight to mice using the technique.

Sinclair describes the field as “nascent” but thinks it has unique promise. “What else can you do that can reverse the age of the body?” he says. “In my lab we are ticking off the major organs and tissues, for instance skin, muscle and brain —to see which we can rejuvenate.” Sinclair says he is not involved in Altos but he did speak at the 2020 meeting and applied for an award from Milky Way.

Altos hasn’t made an official announcement yet, but it was incorporated in Delaware this year and a securities disclosure filed in California in June indicates the company has raised at least $270 million, according to Will Gornall, a business school professor at the University of British Columbia who reviewed the document. In addition to Bezos and Milner, the company may have additional wealthy tech figures and venture capitalists as investors.

Other hires made by Altos include Peter Walter, whose laboratory at the University of California, San Francisco, is behind a molecule that shows remarkable effects on memory. Also joining is Wolf Reik, a reprogramming specialist who recently resigned as the director of the Babraham Institute in the UK after the center said he was taking a job “with another research organization” now believed to be Altos. Walter and Reik declined to comment.

At least initially, Altos will be funding researchers with no immediate expectation for products or revenues. According to one person briefed by Klausner and Milner, the initial output of the company will be “great science.”

Altos is luring university professors by offering sports-star salaries of $1 million a year or more, plus equity, as well as freedom from the hassle of applying for grants. One researcher who confirmed accepting a job offer from Altos, Manuel Serrano of the Institute for Research in Biomedicine, in Barcelona, Spain, said the company would pay him five to 10 times what he earns now.

“The philosophy of Altos Labs is to do curiosity-driven research. This is what I know how to do and love to do,” says Serrano, who plans to move to Cambridge, UK to join an Altos facility there. “In this case, through a private company, we have the freedom to be bold and explore. In this way it will rejuvenate me.”

Any treatment for a major disease of aging could be worth billions, but Altos isn’t counting on making money at first. “The aim is to understand rejuvenation,” says Serrano. “I would say the idea of having revenue in the future is there, but it’s not the immediate goal.”

In 2013, Serrano was among the first scientists to genetically engineer mice to produce Yamanaka factors. They all developed tumors as their cells reverted to an embryonic stage. Still, the work hinted that time could be reversed inside a living animal. “You introduce the factors and they do the magic. It’s very simple experimentally, even if it is not understood,” says Serrano.

The major question now is how to tailor reprogramming to see if it can safely rejuvenate animals without killing them, and whether the process can be carried out using ordinary drugs, rather than via genetic engineering. “To me the Yamanaka factors are not realistic for use in the clinic,” Serrano says. “They involve the introduction of genes, some of which are oncogenic. This is hard to pass through the filter of regulatory agencies.”