Behind The Wheel, Under The Hood Of World’s First 500-Mile EV

by Lawrence Ulrich: Whether Lucid Motors will succeed in the brutally competitive auto business remains an open question… 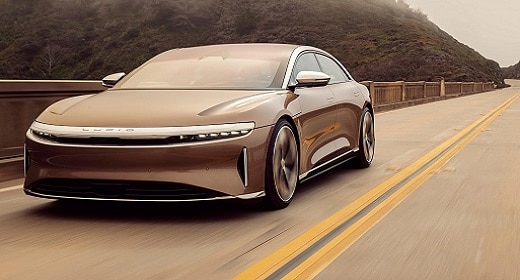 But its technological advantages are settled: With an EPA-rated range of up to 837 km (520 miles), the Lucid Air sedan can travel farther on a charge, and charge faster, than any EV in history.

I got my first taste of the Air in the Sonoran Desert, a few hours from Lucid’s $700 million factory in Casa Grande, the first from-the-ground-up EV plant to open in North America. (Tesla hopes to open its first greenfield car factory in Austin by year end.) The spacious sedan actually exceeded expectations, combining shelter-magazine interior luxury, slick handling and boggling acceleration. Step on the accelerator, and the 1,111-horsepower Lucid sprints ahead like the cartoon Roadrunner, leaving most internal-combustion cars looking like hapless Wile E. Coyotes. That includes an insane quarter-mile run in 9.69 seconds at over 233 km/h (145 mph), and 0-60 mph in less than 2.5 seconds. That blurry view is enhanced by an atrium-like “Glass Canopy.” An equally dramatic 86 cm, 5K curved display wraps around the driver.

YouTube drag runs aside, the Lucid’s calling card is unmatched efficiency of up to 4.6 miles per kilowatt hour. That frugal operation is boosted by a 924-volt architecture (versus 400 volts for Tesla, and 800 for Porsche’s Taycan) whose benefits include restoring up to 300 miles of range in 20 minutes on a 350-kilowatt DC fast charger. That’s another industry high. (Buyers also get three years of free refills on Electrify America’s growing public network.) Six versions of the Air, ranging from 726 to 837 km (451 to 520 miles) of range, have seized the top six spots in the EPA’s range rankings, with Tesla’s best delivering just 652 km (405 miles).

So what does it take to squeeze 837 km (520 miles) of range from a roomy, 2.5-ton luxury sedan? A factory tour underlines the company’s relentless focus on miniaturization and in-house tech. That’s led by Peter Rawlinson, Lucid’s Wales-born founder and CEO/CTO. You may recall Rawlinson for his key role in developing the game-changing Tesla Model S, as that car’s chief engineer. Prior to that, Rawlinson was chief engineer at Lotus, whose Elise sports car served as the basis of Tesla’s first car, the Roadster.

The Silicon Valley-based company on Wednesday announced a “Dream Delivery Day” for Oct. 30, where the earliest adopters (among more than 13,000 reserved customers) will receive Air Dream Editions, priced at $170,500 and limited to 520 copies. The now-public company, flush with $4.5 billion in new investment cash, and 65-percent owned by Saudi Arabia’s Public Investment Fund, saw its stock surge up to 47 percent on news of the first deliveries.

Home on the range

Rawlinson is known to scoff at EVs that simply stuff more batteries aboard to achieve stamina targets: “Dumb range,” he calls it. This week, Lucid finally put a number to its largest battery pack: 118 kilowatt hours, a far cry from the up-to-200 kWh units coming in EV behemoths like the GMC Hummer EV.

The result is class-best mileage of 131 mpge, or the electric equivalent of one gallon of gasoline.

We watch some of the first production Airs roll off the line at this leading-edge plant, its own processes a critical part of energy savings, from manufacture to final product. The Air’s chassis and body are virtually all-aluminum, a mix of extrusions and castings bonded by rivets, screws and adhesives (and very few welds) to trim weight. Whirring robots assemble structural battery packs with 22 modules and 6,600 cylindrical cells, a Lucid/LG version of the 21700 cells used by Tesla’s Model 3 and Model Y. A Lucid innovation connects cells with slender aluminum ribbon instead of wire, saving a claimed 80 horsepower that would otherwise be wasted in electrical resistance. Those battery cells are fixed with adhesive and cured for 26 minutes. A metal cooling plate, the new standard in EV packs—which Tesla will soon adopt, eliminating a space-wasting thermal circuit—dissipates heat from terminal ends.

Lucid’s signature power units are among the headline attractions.

Each unit—with one per axle for all-wheel-drive Airs—generates a potent 650 horsepower. Their 20,000-rpm permanent-magnet motor, gearbox, inverter and differential weigh just 74 kilograms, and the entire unit can squeeze inside a standard roller bag. The result is more than double the gravimetric power density of Tesla’s units, at 6543 watts/kg (3.98 horsepower per pound). That 924-volt architecture again comes into play, maximizing operation of the inverter and electronics. Innovations include a cooling method that gets liquid closer to the motor core, as Rawlinson cited in an interview with IEEE Spectrum, and an inverter whose silicon-carbide MOSFET chip “really thrives on high voltage.”

In addition to trimming electrical resistance, Lucid sought to ease mechanical and aerodynamic friction. Lucid’s wind-tunnel testing isn’t yet independently confirmed. But engineers expect a 0.21 coefficient of drag from the streamlined Air, an industry record for any luxury model. Smart thermal management plays a role, with less need for large ducts to cool the powertrain and electronics. For an idea of the “every little bit” approach—and unsung heroes such as aero, unsprung weight and tire resistance—consider the 933-horsepower Dream Edition Range version: Opt for more-stylish 21-inch wheels with taller, wider tires, and EPA-rated range falls to 774 km (481 miles), versus 837 km (520 miles) with a standard 19-inch wheel package. That’s 63 km (39 miles) of additional range from wheels and rubber alone, with no change whatsoever to the body or powertrain.

“50 or 60 years from now, EVs may actually have less range. Psychologically, there won’t be this sort of paranoia and dependence on a public supercharging network. And home charging is healthier for the battery, anyway.”
—Peter Rawlinson, Lucid CEO/CTO

The Air might have eked out even more miles by adopting the kind of frugal-yet-flabby tires found on, say, a Toyota Prius. But that wouldn’t work for a high-style luxury sedan that demands dramatically large wheels, and the roadholding and handling to match European sport sedans. So Pirelli and Lucid developed the world’s first “HL” rated tire, designed to safely accommodate the weight of EV’s—and the Air’s 270 km/h (168-mph) top speed—but with as little rolling resistance as possible. The Lucid also integrates its onboard “Wunderbox,” a charging unit designed to allow the bi-directional, vehicle-to-grid (V2G) or vehicle-to-vehicle charging of the future. Onboard, 120-degree Lidar is another industry first, part of a suite of 32 sensors that includes 14 cameras, one a driver monitor. A near-consensus of autonomy experts sees Lidar and driver monitoring as critical to truly self-driving cars; Elon Musk, whose cars don’t integrate either, continues to disagree.

For Lucid, the next make-or-break step is the Gravity, an SUV whose production is slated for 2023. The company hopes to build 20,000 Airs next year, generating $2.2 billion in revenue. A factory expansion, already in the works, will boost that to 90,000 units by 2023, toward an ultimate goal of 365,000-unit capacity. Lucid plans additional factories in Europe, China and Saudi Arabia. The Saudi factory could open by 2024, as the kingdom seeks to reduce dependency on its oil economy and transition to electric cars.

Further out, Rawlinson envisions a future of affordable EVs, for as little as $25,000, largely driven by miniaturization and ubiquitous charging at home or in public. A mere 300-mile Lucid, for example, could carry smaller batteries, creating a daisy chain of gains: Less battery weight, and less vehicle mass (including relatively smaller brakes) to support it. It all translates to electrons saved.

“50 or 60 years from now, EVs may actually have less range,” he says. “Psychologically, there won’t be this sort of paranoia and dependence on a public supercharging network. And home charging is healthier for the battery, anyway.”

Rawlinson certainly isn’t holding out hope for major, near-term breakthroughs in battery chemistry. The new David to Musk’s Goliath—he’s definitely fond of throwing stones at his onetime boss—admits seeing potential in the 4680 cell that Tesla (and its battery suppliers) have struggled to scale and bring to mass production. But even that 4680 appears a triumph of packaging, not of chemistry, with its tightly packed “jelly rolls” that allow more active cell material versus its surrounding casing.

“I do think there’s an upside to going to large format.” he says. “That would reduce internal resistance, and that’s a valuable step forward. But people are looking at 4680 as this huge breakthrough, and that’s a fantasy.”

Lucid, of course, has miles and years to go to become any competitive threat to Tesla, a now $1-trillion company that’s on track to sell nearly 1 million cars this year. Lucid actually sees the Air’s main showroom targets as flagship European ICE sedans like the Mercedes S-Class, not Tesla’s Model S. But business prospects aside, Lucid has already performed a valuable public service: The conventional wisdom, shouted from every news channel, investor call or tech site, was that Tesla’s lead was insurmountable, its technology unmatched for years if not decades to come. Lucid has upended and exposed that conventional wisdom, in the time it takes to recharge the Air, or drive for 520 miles.