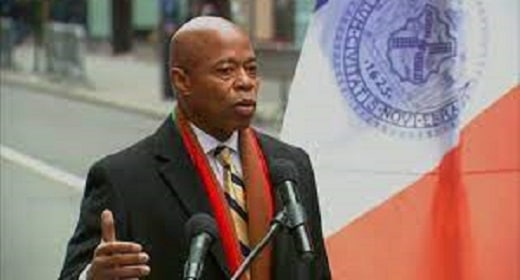 For the next four years, Adams will wield the power to effect large-scale, civilization-level changes in the largest city in the United States, affecting New York City’s 8.4mm+ residents. The effects of these changes will naturally ripple out in massive waves of causality and consciousness, ultimately impacting the entire the world.

We at Meditation Magazine are very excited, and hopeful for the future, as Adams waits to take his position as one of the most powerful advocates for meditation & veganism on Planet Earth.

When I sat down to interview Eric Adams on a dreary spring day in 2019, none of my friends or family members knew who he was.

Meditation Magazine was still in its infancy then. We had just released our pilot issue and distributed in Greenwich Village for free… and Whole Foods and Barnes & Noble were expressing interest in Issue #2 for national distribution! I was super pumped. Brimming with manic optimism, I set off on a mission to interview New York’s most influential meditators.

I had heard through the grapevine that the President of Brooklyn was a long-time meditator, and was working to introduce meditation programs into NYC’s public schools, so I jumped at the chance to interview him.

Adams was already in the top three in NYC’s upcoming mayoral race, but Scott Stringer (NYC’s Comptroller) was in the lead. I thought Adams’ candidacy was a long-shot. I didn’t think he would win. I’d been disappointed by my ideological favorites in the past. The Ron Pauls, Bernie Sanders, and Andrew Yangs of the world were always thrown under the bus by the mainstream media.

The Mayor race was just beginning to heat up, but it was still two years away. Anything could happen in two years. Deep down, the jaded, brow-beaten political activist in me assumed that Scott Sringer (who seemed to be the “mainstream” favorite) would end up widening his lead and becoming NYC’s next mayor.

But I didn’t care. Adams was one of the most powerful meditation advocates in NYC politics, so I wanted to interview him, and support his campaign, as the idealistic underdog.

I called my ragtag film crew, flew down the stairs of my Greenwich Village walkup, ran through the rain on MacDougal Street to West 4th, and jumped through the closing doors of the A Train on my way to United Way’s Headquarters in Midtown.

BP Adams was finishing a meeting when we arrived — I didn’t know what it was about, but it looked important. I only got a glance of the back of his burgundy suit jacket as I passed the open doorway, but the United Way employees on the other side of the desk had big smiles on their faces. I got the vague feeling that BP Adams was involved in some important charity initiative in collaboration with the United Way.

I usually interview meditation teachers, gurus, and hippie types, so I had a vague sense of being out of my element as Eric’s assistant showed us to a fluorescent-lit conference room overlooking Midtown Manhattan.

My anxiety grew as we scrambled to set up our camera equipment in this alien conference room environment… but when President Adams walked in with a kind smile and warm sense of humor, my stress melted away in a heartbeat.

I told him I liked his burgundy suit — he laughed and said it goes well with the color his mama gave him.

Like Captain Holt, Eric Adams was a young African American police officer (in Brooklyn’s 88th precinct — Brooklyn 88, if you can believe that!) who battled systemic racism and fought his way up the ranks to become a Police Captain. 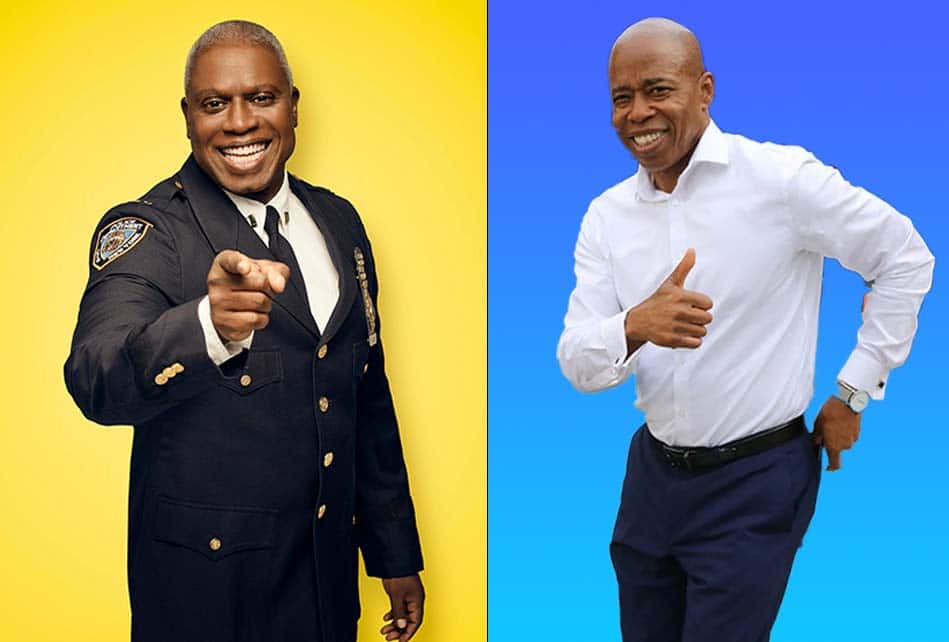 As we began our interview, the similarities struck me more and more. Holt and Adams speak in similar ways — no fluff, no BS, straight to the point in the most efficient way possible. Both are intelligent and articulate, and seem to genuinely care about making a difference in their communities and for the people around them. They even kind of look alike… check it out!

While they clearly have their differences, the similarities Between Raymond Holt and Eric Adams are eerie enough to make me wonder if the fictional character of Holt was actually based on the real life character of Adams.

But Holt and Adams differ greatly in their views on animals & veganism.

While Captain Holt has been known to eat street meat at the office and prosciutto at his dinner parties, Eric is a strict vegan, and a passionate animal-rights advocate.

As President of Brooklyn, Eric Adams has been quietly making strides to reduce the consumption of animal products in NYC, by implementing programs like Meatless Mondays in NYC’s hospitals and public schools.

While animal rights & environmental activists applaud BP Adams for implementing these programs, they have sparked their fair share of controversy as well.

“Meatless Mondays” is a national propaganda campaign that purports to promote healthy and environmentally friendly meal options. Goodbye hot dogs, hello bean curd. Instead of delicious cheeseburgers and pepperoni pizza, the children will have to scarf down roasted chickpea tagine and something called kid-friendly kale salad.

Todd’s article had just been published when we sat down with BP Adams on that dreary spring day back in 2019. So to start out our interview, I had to ask:

“Why has there been so much pushback against your plant-based agenda?”

Like Captain Holt, BP Adams responds succinctly and powerfully, without holding back:

Meat is built into the culture. People self-medicate with meat. Meat is something that has been fixated with pleasure. And if we’re going to turn around that conversation, and not expect people to have withdrawals, then we’re setting ourselves up for failure. My goal is not to talk down to people, but to really educate people and let them see the health and emotional benefits that comes with eating a diet that is not oversaturated with meat.

Curious about Adams’ motives and motivations, I dug deeper. I asked him why he went vegan in the first place, and why he cares so much about this issue. His response surprised me:

I was diagnosed with Type 2 Diabetes… I was experiencing vision loss in my left eye, and my right eye was going as well, with nerve damage that they told me was permanent in my hands and feet.

I went on a whole food, plant-based diet, cold turkey. My eyesight cleared up in three weeks, and my diabetes went into remission in three months. The nerve damage went away, the ulcer went away, there was a normalization of my blood pressure… it was just a total reversal of the condition that I was facing.”

While I found Eric’s story fascinating, I was surprised that he had come to veganism through the “health” route. I’d hoped that Eric’s veganism was stemming from empathy, compassion & kindness — a suite of emotional skills that I think is very important for anyone in a position of power, in order to be a caring and compassionate leader.

So I asked him if he had found any other benefits, or resonated with any other aspects of veganism along his plant-based journey. As he spoke his reply, I was moved by his story of discovery:

In addition to what happens to you physically, I feel that something happens to you emotionally and spiritually. As I started to delve into plant-based diet, I was coming up on different articles about veganism, animal torture, animal rights… I started to see that when you’re eating the soul of a living being, you are also internalizing all the trauma. When that animal is killed in front of another animal, that trauma goes through its body.

And It’s amazing to me how things are always in your spirit. Because prior to going to a plant-based diet, I was a state senator. When I was state senator, I led a protest at Prospect Park to protect the Geese, because we were killing Geese, and I just felt that it was wrong. When I saw a mother goose swim by with her babies, it was no different than the mother who was walking through the park with a stroller and her babies. I saw that when you took the life of that mother goose, you were also traumatizing and turning those baby geese into orphans. Being an orphan, being traumatized, is not a unique characteristic of human beings. Living beings are traumatized based on actions, and I just knew I didn’t want to be part of that traumatization…

Kevin Ellerton is an ever-changing flow of matter and energy that is often described as “human.” From the perspective of those who perceive him as a discrete entity, Kevin has been traveling the world, teaching & writing about meditation since 2010. Kevin loves you and wants you to be happy. In his words, “we are all one consciousness,” or some weird hippie crap like that.