by Rory Mackay: Happy Winter Solstice! This post is an excerpt from my book Bhagavad Gita – The Divine Song and one that is timely both in terms of the season and the tremendous struggles we’re facing both personally and globally… 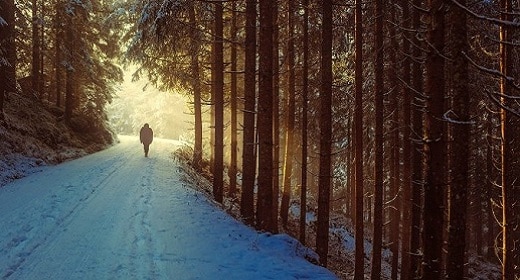 Basically, every thought that we think, every action we take, and every interaction that we have is either taking us toward our goal—or away from it. And that goal should always be the light.

“There are two paths a soul may take. One leads to further rebirth and the other leads to liberation, after which no rebirth is necessary.

“The path of light, of fire and day, leads northward, to the good fortune of a pure mind and heart. This path leads knowers of Brahman to the abode of the Self. The path of dark, of cloud and of night, leads southward into smoke and obscurity, keeping the soul locked in the cycle of rebirth.

“These two paths, the light and the dark, are eternal, leading some to liberation and others to rebirth. Knowing these two paths, the yogi chooses his course carefully and is not deluded. At all times, Arjuna, the choice is yours and liberation is attainable. Knowledge leads to freedom. Beyond the teachings and injunctions of the scripture, and beyond the performance of ritual and charity, it is through the practice of Self-knowledge that you attain the highest goal of liberation.”

‘North’ and ‘south’ refer to the path of the sun. The sun moves northward in the sky after the winter solstice, leading to brighter days, and moves southward following the summer solstice, heralding darker days. The northern path is thus the path of light, leading to liberation from rebirth.

Those who venture down the southern path, however, travel ever deeper into the darkness of ignorance—into immersion in the material world of desires, compulsions, pleasures and pain, leading to further karma and rebirth.

This analogy echoes the words of the Chandogya Upanishad:

“A hundred and one subtle tracks lead from the heart.
One of these goes upward to the crown of the head.
Going up by it, he goes to eternal life.
Others depart in various directions.”

These ‘various directions’ are the result of ignorance and are driven by the person’s vasanas and accumulated karma. Fooled by maya and gripped by the experience-hungry senses, the ignorant vainly seek lasting happiness, security and gratification in the world of the finite, even though each fleeting moment of happiness is inevitably offset by sorrow.

The wise, however, heed Krishna’s words. Committing themselves to the path of light, they set their sights on the attainment of liberation through Self-knowledge. While the ignorant pursue endless material goals, seekers of liberation have only a single goal in mind: the realisation of their own true nature as pure, deathless, unbound awareness.

“As a seeker of liberation, you are not against the world, or people, or possessions. These are all gifts from God. Use them, but do not depend on these ephemeral things for your security, peace and happiness. Hold onto the Self alone.”

It’s essential that you choose your path wisely. Your focus determines your fate. So what do you want? Do you want the limited and finite, and continued entanglement in samsara, or do you want the freedom and liberation of the Infinite?

The choice is yours.

Krishna promises that, for the devoted seeker, liberation is at all times attainable, and the key to this liberation is Self-knowledge.