Michael Jordan, Kobe Bryant’s Meditation Coach on How to Be ‘Flow Ready’ and Get in the Zone

by Lauren Effron: George Mumford has worked with many NBA players to help improve their game… 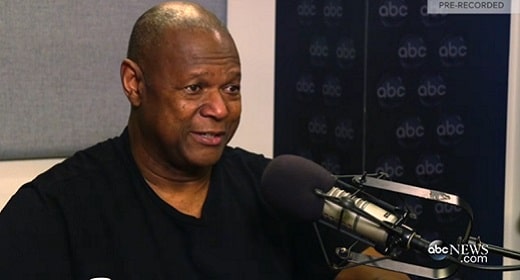 Michael Jordan, Shaquille O’Neal, Kobe Bryant, titans of the NBA, all have something in common that goes beyond their stellar basketball skills and multiple championship rings.

They all credit the same man for helping their game — sports psychologist and mindful meditation teacher George Mumford.

Mumford worked with the Chicago Bulls championship team for five years during the Jordan hiatus in 1993-1994 and after Jordan came back to the team in 1995. He has since helped countless NBA players, including Kobe and Shaq — he’s currently working with the New York Knicks — through teaching players mindfulness meditation techniques.

Mumford sat down with ABC News’ Dan Harris for his livestream podcast show, “10% Happier,” in which he talked about how he gets these fierce competitors to sit and practice mindful meditation, which focuses on breathing and relaxation, and how he shows them the practice can greatly improve their game.

When he walks into the locker room, Mumford said he has two approaches.

He talked about several different concepts he gives the players, including one he called “one breath, one mind,” meaning he gets everyone in the room “to breathe together to become one” team.

What Mumford means is taking the time to perceive what is happening in front of us, such as seeing the basket while standing at the free throw line, and then focusing on the response before acting on it, “being present.”

“It’s more a monitoring aspect with more– rather than ‘I got to make this shot’ — no just shoot,” he said. “You’ve trained your nervous system to do it, so now your conscious thinking needs to be quiet and let your body do what it does… Nothing exists but this moment and what you’re doing.”

“Meditation is not trying to go anywhere or do anything, meditation and being present is just seeing what’s there and letting it speak to you,” Mumford continued. “The goal is to be present to what is. … Can you create space where you can observe it without being identified with it.”

Mumford also spoke about his personal journey towards finding meditation, something he details in his book, ““The Mindful Athlete: Secrets to Pure Performance.” Growing up in Newton, Massachusetts, Mumford played basketball at University of Massachusetts-Amherst, but he said chronic pain from injuries led him to become addicted to painkillers and eventually heroin and alcohol. At the time, he was working as a finance journalist.

“I was really good at it but it wasn’t who I was,” Mumford said. “I hit a spiritual bottom… I just wasn’t happy. You get to a point where you can’t get high and you can’t not get high.”

“And so on April Fool’s Day 1984 a friend of mine came by who I used to get high with and he was clean he took me to an AA [Alcoholics Anonymous] meeting and it totally changed everything,” he added. “It started hitting me that I’m going to die if I keep doing this… And so I got to a point where I saw there was a way out.”

Mumford initially began practicing meditation as a way to deal with physical pain, “but then it went way beyond that,” he said.

“I realized … it’s being connected to something greater than yourself, it’s being able to know the truth and ‘let the truth set you free’ that was the ultimate stress reducer, which is really understanding how this mind-body process works,” Mumford said.

After he committed to getting clean almost 32 years ago, Mumford said he got into Dr. Jon Kabat-Zinn’s Mindfulness Based Stress Reduction program and later he worked with him to launch a clinic in inner-city Boston. Mumford became a therapist and trained other meditation teachers and worked with a state-wise mediation and yoga program for prison inmates. Then in Oct. 1993, then-Bulls coach Phil Jackson – who is now the president of the Knicks – brought Mumford in to work with the Bulls.

In working with the Bulls and other players on meditation practice, Mumford said he also works with them on “changing the inner dialogue” from negative thoughts to positive ones about love and compassion for themselves and even for the opposing team when they get beat.

When asked how he got a room full of NBA players to embrace thoughts of love and compassion, Mumford laughed and said he tells them, “don’t be hatin.’”

“Here’s the key, they’re not competing against them, they are competing against themselves… the enemy is within,” he said. “Mindfulness is not judging, but learning from it and letting it speak to you. … we’re not really hearing what’s there, we’re interpreting it based on what we already know, and so part of this is to have the vulnerability to not know and just see what this is.”