Webb Has Arrived Successfully At L2 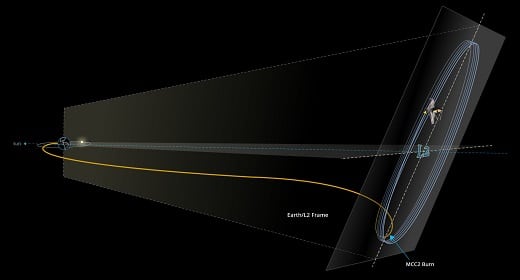 A final 5-minute thruster firing on January 24, 2022 put JWST in its halo orbit at the Sun-Earth Lagrange 2 (L2) point. The formal commissioning process can now begin.

“We’re excited to announce today that Webb is officially on station at its L2 orbit, capping off a remarkable 30 days,” said Webb’s commissioning manager Keith Parrish in a January 24 news conference. “It’s an incredible achievement by our team.”

Since it launched on December 25, Webb has been undergoing the nail-biting and complicated unfolding and deploying while cruising through space. Everything so far has gone perfectly.

“During the past month, JWST has achieved amazing success and is a tribute to all the folks who spent many years and even decades to ensure mission success,” said Bill Ochs, Webb project manager at NASA’s Goddard Space Flight Center, in a blog post. “We are now on the verge of aligning the mirrors, instrument activation and commissioning, and the start of wondrous and astonishing discoveries.”

Parrish reiterated how efficient the launch by the Ariane 5 rocket and the course correction maneuvers have been, potentially giving the JWST mission twice the lifetime as originally announced, as long as 20 years.

“We used a tiny amount of fuel in today’s maneuver,” he said, “We’re very, very happy with our estimated lifetime, and it’s going to extensively exceed our 10 year estimate. Everybody’s thrilled by it. It’s just a degree of how thrilled.” Parrish added that the team will review the data and put an exact number on that lifetime over the next few months.

Parrish said approximately once every 21 days, the telescope’s orbit around L2 will need to be tweaked by briefly firing JWST’s thrusters.

The telescope team will now begin the months-long process of calibrating its mirrors and turning on the science instruments.

Lee Feinberg, JWST’s Optical Telescope Element Manager said the 3-month process of aligning the 18 mirror segments to act as one large 6.5 meter telescope will begin in about a week, after the primary near-infrared camera, NIRCam, is cold enough to turn on. That instrument will help align the mirrors.

“We’ll look at a bright, isolated star,” Feinberg said, “and we’ll get 18 different images — which will all be blurry because the individual mirror won’t be aligned. Then we can begin the slow process that we call phasing, which will align the mirrors to work as one.”

Feinberg said the mirrors will be aligned to within 1/5000th the width of a human hair. He also revealed the identity of the star they will use: HD 84406, a G-type main sequence star that is a lot like our own Sun.

“It’s a Ursa Major near the bowl of the Big Dipper,” he said noting that the star is not visible to the naked eye, but it can be seen with binoculars.

While everything has gone well so far, there is still a lot of work to get the telescope ready for action.

“We’re a month in and the baby hasn’t even opened its eyes yet,” said Jane Rigby of NASA Goddard Space Flight Center. “Everything we’re doing is about getting the observatory ready to do transformative science. That’s why we’re here.”