Wildfires are destroying nearly twice as much tree cover globally as they did in 2001, burning through an additional 7.4 million acres of forest annually, an area roughly the size of Belgium, a new analysis shows… 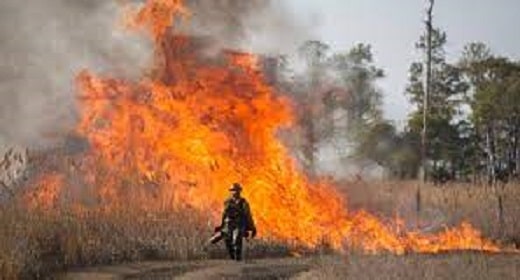 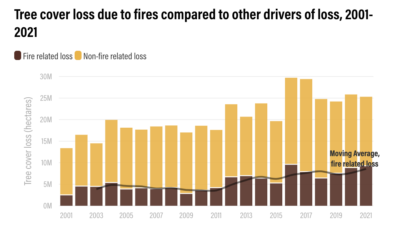 Researchers at the World Resources Institute (WRI) found that fires account for a growing share of forest loss. While wildfires were responsible for around a fifth of global tree cover loss in 2001, they accounted for more than a third in 2021. Researchers say that climate change is driving more intense and widespread wildfires by fueling more extreme heat and deepening drought, which dries out forests. The analysis was based on a recent study, which found a “near-uniform” growth in fire-related tree loss across the globe, from the Amazon to Australia to Siberia.

By virtue of their size and propensity to burn, boreal forests accounted for roughly 70 percent of fire-related losses over the last two decades. Boreal woodlands saw burned areas grow by 270,000 acres per year, on average, over the last 20 years, according to WRI. These forests are a major carbon sink, with much of that carbon stored in permafrost. As forests burn and permafrost melts, they are unleashing huge stores of greenhouse gases.

To combat wildfires and better understand their impacts, scientists are working to anticipate where severe fires might erupt and where smoke might blow. A new NASA-led study of the 2020 California wildfires determined that more water-stressed pine forests were prone to more intense burns, findings that could help researchers better predict future fires. Another recent study showed that an experimental smoke forecasting tool from NOAA accurately predicated the initial spread of smoke from California’s 2018 Camp Fire. The smoke-forecasting system will soon cover all of North America and will be fully operational in the next couple of years, researchers say.