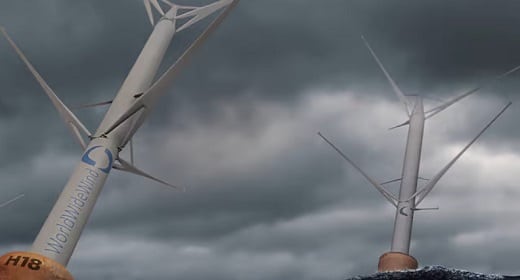 Taking wind farms way offshore can certainly help make them less obtrusive, and open up a lot more opportunities – but as the ocean gets deeper, conventional horizontal-axis wind turbines (HAWTs) begin making less and less sense. HAWTs need to hold a lot of heavy components – drivetrains, gearboxes, generators and their colossal blades – right up the top of a long pole, so mounting them on floating platforms that don’t want to tip over is a huge challenge – not to mention maintaining the business end of a turbine so far above the ground.

Some engineers and operators believe this could be a niche where VAWTs could shine instead. Their blades reach upward, but all their other heavy bits are at the bottom, so their natural tendency is to sit upright. Also, they can accept wind energy from any direction, rather than needing to turn to face into the wind, cutting down on some more heavy gear you’d find up high on a HAWT. They’re typically far less efficient than a regular three-blade HAWT, sucking less energy out of a given breeze, but on the other hand, you can place them closer together without a drop in performance, meaning they could potentially suck more energy out of a given patch of ocean. 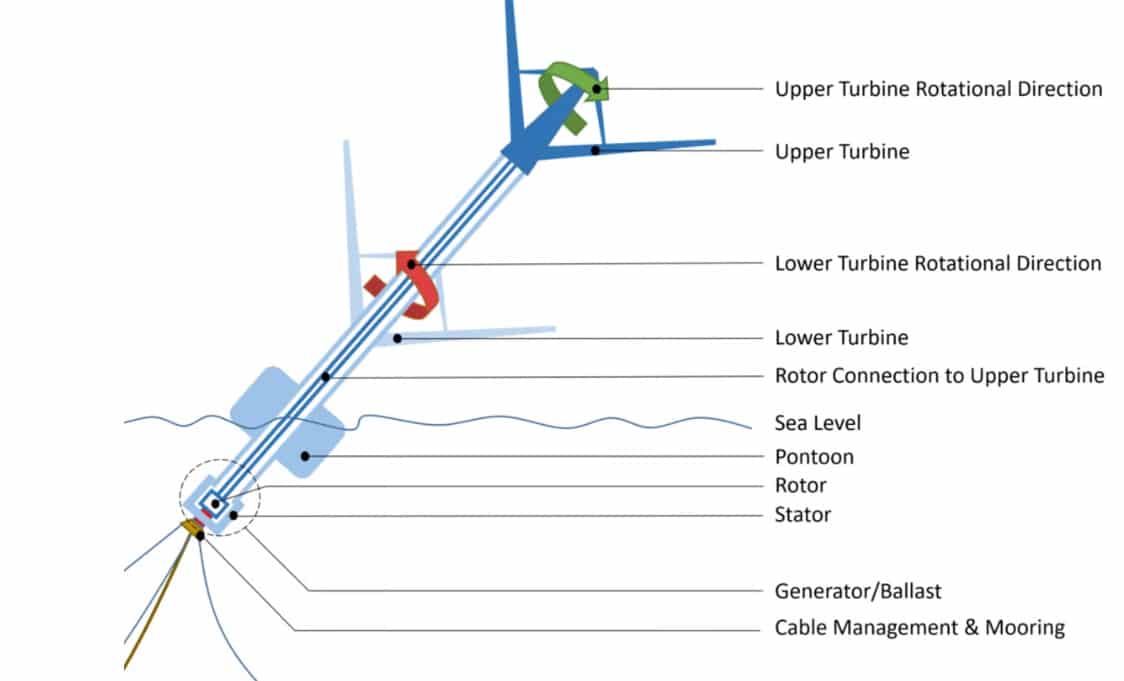 And so to the device at hand. World Wide Wind has proposed an entirely new type of floating VAWT specifically designed for offshore deployment and massive scalability. Indeed, it’s two VAWTs in one; the lower one is fixed to the outer casing of the tower, and set to rotate one way, and the upper one is mounted to a shaft running right up the middle of the tower, and it’s set to rotate the other way.

Under the surface, one turbine is fixed to the rotor, the other to the “stator,” doubling the relative speed of rotation as compared to a static stator, and generating a whole bunch of electricity we can burn our toast with. The company calls this a contra-rotating vertical turbine, or CRVT.

Again, the heaviest parts and the ones requiring most maintenance are at the bottom, below the buoyant pontoon, right down near where the tethers and power cable attach. But the whole thing isn’t designed to sit perfectly upright; these enormous towers will tilt with the wind. World Wide Wind says this, and the blade designs, which sweep a conical area, helps to reduce the turbulent wake downstream of each floating tower, allowing operators to cram even more of these things into a given site. The ability to tilt will also help these things resist sudden, violent wind gusts and damaging vibrations. 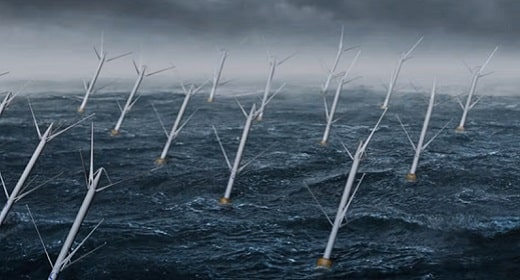 World Wide Wind plans to absolutely dwarf that piddly windmill. This design, says the company, is far easier to scale than any HAWT, and could grow up to a ridiculous 400 m (1,312 ft) in height, with a monster 40-megawatt capacity per unit. In an interview with Recharge, company representatives appear to have suggested a projected Levelized Cost of Energy (LCoE) of less than US$50 per megawatt – less than half the LCoE the US Energy Information Administration projects for the average offshore wind project going to market in 2027.

The company tells Recharge it’s working to accelerate development of the CRVT through rapid prototyping. The targets are to have a 3-MW model up and running by 2026, and the big mama 40-MW machine as soon as 2029.

Will it work? It’s hard to say. The startup provides no supporting research, or evidence that it’s tested micro-scale prototypes. It’s unclear why the company hasn’t gone with Darrieus-style turbine blades, which connect back to the central axis at the top, and tend to be both structurally stronger and more efficient. One wonders about longevity, since all VAWT blades are subjected to strong forces from every angle as they spin – and about the efficiency losses, lifespan and replacement procedures for the gigantic bearings you’d need to support and spin a 400-meter-long shaft inside a counter-rotating 400-meter-long tube, with the mass tilted off-center most of the time. In seawater, of course, for decades.

Not to mention, it’s apparently getting hard to find test locations for wind tech in the North Sea, because there are too many other test projects “almost queueing up” in the region, according to Norway’s Teknisk Ukeblad.

On the positive side, there’s not a tie to be seen amongst the leadership team, so clearly they’re feeling confident and relaxed about this whole thing. World Wide Wind claims partnerships with Uppsala University, Sinted, North Wind, Kjeller Vindteknik, Norwegian Energy Partners, and the Norwegian Offshore Wind Cluster.

As with all clean energy moonshot projects, we desperately want to believe. The expansion and decarbonization of worldwide energy grids cannot possibly happen fast enough, as climate change enters its terrible toddler phase and the unthinkable consequences start becoming impossible to ignore. Giant 40-megawatt coaxial towers way out at sea, undercutting the LCoE of today’s offshore wind, could make a huge contribution in the existential battle of the coming century. But we don’t need renders, diagrams and promises, we need tangible results – and we need them yesterday.

We reached out to World Wide Wind to learn more, and have now published an enlightening, in-depth follow-up interview with the core team.