by Haley Ott: Scientists, governments, and companies from around the world are increasingly investing in a potential source of energy 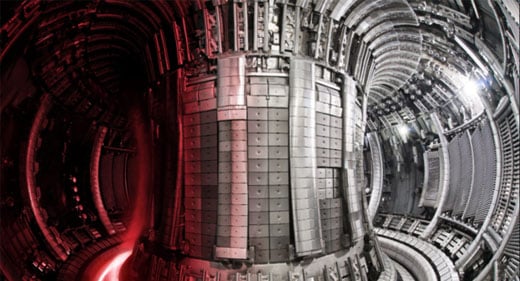 that could provide unlimited, clean power to everyone on Earth: nuclear fusion.

Fusion is the process that powers the sun and the stars. It’s the opposite of nuclear fission, the process used in today’s nuclear power plants, which splits atoms apart.

In fusion, two atomic nuclei are combined to create a heavier nucleus, and the process releases energy. The reaction takes place in a state of matter called plasma, which is distinct from liquids, solids or gasses.

In the sun, nuclei collide at hot enough temperatures to overcome the electric repulsion that would normally keep them apart. When they are very close together, the attractive nuclear force between them becomes stronger than the electric repulsion, and they are able to fuse. The gravity of the sun ensures that nuclei are kept close enough together to increase their chances of colliding.

If humans can harness the power of fusion on an industrial scale, it could help create a virtually limitless source of clean energy on earth, with the power to generate four million times more energy than burning coal or oil, according to the U.N.’s International Atomic Energy Agency.

That is the goal of a multinational, multibillion-dollar project called the International Thermonuclear Experimental Reactor, or ITER, which is under construction in southern France.

Scientists believe fusion plants would be much safer than today’s nuclear fission plants — if the process can be mastered.

“It can’t run away. It’s a very difficult reaction to sustain; it needs to be driven. Whereas fission can run on a chain reaction, and it has to be controlled,” Tim Luce, the head of science at ITER, told CBS News.

Fusion also creates much less radioactive byproduct than fission, and what it does leave behind is “not water soluble — they won’t get into the food supply, the water supply,” Luce said.

Some concepts for fusion reactors being developed today will use two types of hydrogen atoms, deuterium and tritium, for fuel.

Deuterium can be easily and cheaply extracted from sea water. Tritium, which does not exist abundantly in nature, could potentially be produced by a reaction between fusion-generated neutrons and lithium. It is also a byproduct of the nuclear fission process used in power plants around the world today.

Scientists have already managed to produce fusion reactions, but not without using more energy to trigger the process than they were able to produce through it.

Assuming scientists are able to achieve “net energy” — producing more energy than they use to create the fusion reaction — other things will still need to fall in place for fusion to become a secure, viable energy source for the world.

“We must also prepare the path broadly for fusion commercialization, going well beyond R&D,” Dr. Scott C. Hsu, lead fusion coordinator in the Office of the Undersecretary for Science and Innovation at the U.S. Department of Energy, said in a Senate hearing last month.