by John Timmer: Europe seems to be ready for the winter as renewable growth largely offsets coal. 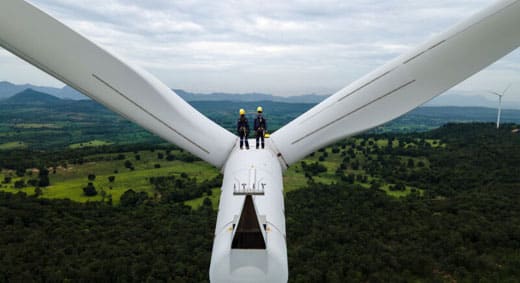 The past several years have seen a lot of unexpected turbulence in the global energy market. Lockdowns during the early pandemic response caused energy use to plunge in 2020, but carbon emissions soared as the economy rebounded in 2021. Early 2022, however, saw Russia invade Ukraine and attempt to use its energy exports as leverage over European countries, leading to worries about a resurgence in coal use and a corresponding surge in emissions.

As 2022 draws to a close, however, there are many indications that things aren’t going to be all that bad. Coal use has risen, but not as much as feared, and the booming renewables market has largely offset its impact on emissions. Meanwhile, Europe has made rapid adjustments to its energy supplies and appears to be in a position to handle this winter’s likely energy demands.

In many parts of Europe, energy use peaks in the winter with the onset of cold weather. A lot of the heating demand, along with some demand for electricity, is met by burning natural gas, and Russia is a major supplier for the continent. With Russia’s invasion of Ukraine, European sanctions initiated a series of threats and then curtailments in Russia’s delivery of natural gas, ultimately ending with the apparent sabotage of one of the most significant natural gas pipelines.

All indications are that Europe will face the winter without any significant imports of Russian natural gas. This led to a massive spike in natural gas prices and ensuing rises in consumer energy prices even during the summer when demand is low. Countries in Northern Europe started planning for emergency conservation measures, and a major surge in coal use was expected.

But things are no longer looking as bleak as they did earlier in the year. Germany, which is well into its planned phase out of nuclear power, ordered its last operational plants to remain open through at least the spring, cutting the amount of electricity that needs to be generated using natural gas.

High prices in Europe also spurred natural gas producers to liquify the fuel and ship it to the continent—to such a large extent that there is now a significant backlog of ships waiting to offload their liquid cargo at European ports. As a result of this and various conservation measures, the continent’s natural gas storage facilities are now at roughly 90 percent of their capacity.

That supply, coupled with policy decisions like planned price caps, has led to a plunge in the price of natural gas in Europe, large enough to wipe out the spike in prices that had occurred earlier in the year. All of which is suggesting that, as long as reasonable conservation measures are taken and Europe avoids any extended cold snaps, it should make it through the winter without a major crisis.

Renewables are changing the game

Meanwhile, the International Energy Agency (IEA) has done a preliminary analysis of 2022 data in order to project where the full year’s energy use and emissions will end up. And things are looking better than might be expected. After 2021 saw a 2 billion tonne rise in CO2 emissions, the IEA estimates that 2022 will likely see them go up by less than one percent, or roughly 300 million tonnes. A major factor behind the increase is an additional 200 million tonnes of emissions from coal burning.

But, the IEA argues, that could have been much worse. A lot of it came from the increased coal use in Europe, which is expected to be temporary, as EU countries will need to reverse it in order to meet their climate goals. And the IEA says that a large growth in renewables meant that a lot of the growth in global energy use is emissions free. The IEA estimates that solar and wind production in 2022 will grow by 700 terawatt hours, the largest increase ever recorded. That was enough to avoid 600 million tonnes of carbon emissions—put differently, the growth in renewables avoided more than twice the actual growth in emissions. 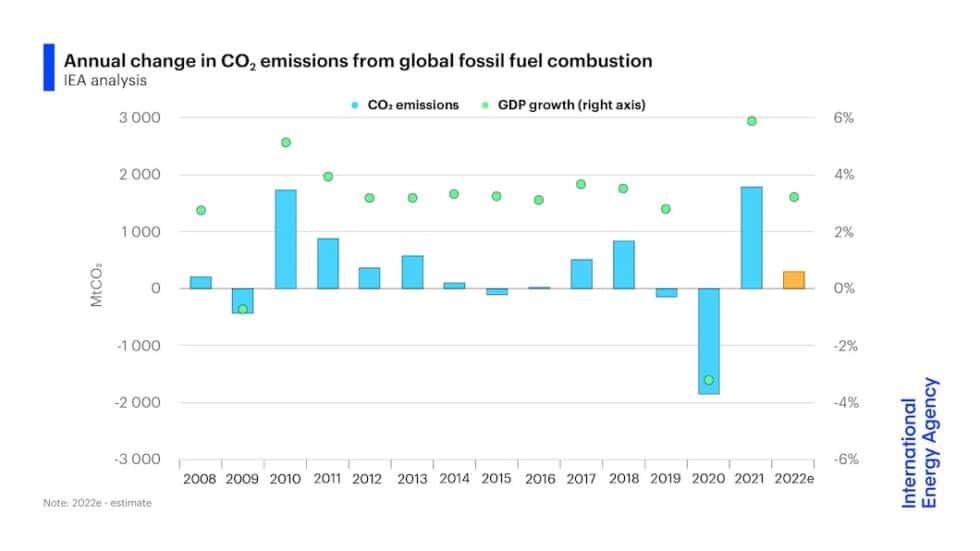 The IEA also indicates that transportation is playing a major role in carbon emissions. 2022 is likely to see air travel return to 80 percent of where it was pre-pandemic, and very little of the fuel used for this is renewable. But the update also cites the rapid growth of electric vehicles as a significant factor in the relatively sedate growth in carbon emissions (although it does not put numbers on their influence).

Overall, the trends look good here. Given their price advantages, the installation of wind and solar is likely to continue growing, leading to additional records for amount of energy provided. Should the recent growth in coal use prove temporary as expected, then that growth will likely include the displacement of carbon-emitting sources. If so, then we can expect to return to the pattern seen in the middle of the previous decade, where GDP growth was largely disconnected from changes in carbon emissions.

The critical question will be whether we can get to the point where we can have consistent GDP growth while emissions drop from year to year. So far, drops in emissions have been too rare to say much about what would enable that.