by Mark Travers Ph.D.: New research in psychology sheds light on the factors that shape our happiness. 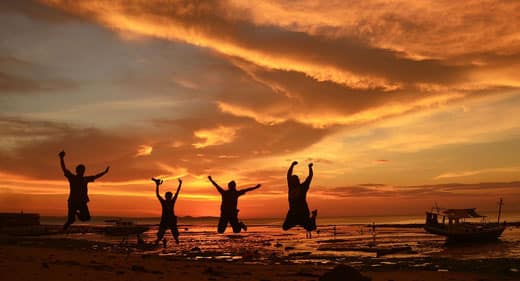 We spend a large portion of our lives searching for things that make us happy.

What works? That depends, but psychologists and happiness researchers have identified a few common elements that tend to be found in happy people. Here are three recent findings from the field of happiness science that may help guide you to a brighter, happier future.

What might we learn from high wealth individuals about how to optimize our own happiness? One insight comes from research exploring the way wealthy people choose to work and spend their time.

They found fewer differences between the wealthy and non-wealthy than they expected. For instance, both groups spent approximately the same amount of time engaging in leisure activities, working and commuting, and using their phone and computer.

There was one key difference that emerged, however. The scientists found that millionaires were more likely to spend time on work activities that offered more personal autonomy—that is, work they decided to do themselves instead of following the guidance of others. This was shown to relate to higher life satisfaction.

Another interesting finding was that millionaires tended to spend more time engaging in “active” leisure pursuits (for example, praying, socializing, exercising, and volunteering) while non-millionaires engaged in more passive leisure activities (watching TV, napping and resting, and doing nothing).

Pillar #2: Tune into your “sense of mattering.”

Happiness comes in two forms. There is in-the-moment happiness, which is derived from things that give us immediate pleasure, like eating a chocolate bar or taking a hot shower on a cold day. There’s also the related idea of life meaning, fulfillment, or reflective happiness. We experience this type of happiness when we reach a milestone or create something we are proud of. It may not be as state-altering as in-the-moment happiness, but its effects can be just as potent, especially in the long run.

While both types of happiness are important, the science suggests that life meaning becomes more important to us over time. Fortunately, a recent paper published in the Journal of Personality and Social Psychology offers guidance on how to improve it.

“Meaning is the web of connections, understandings, and interpretations that help us comprehend our experience and formulate plans directing our energies to the achievement of our desired future,” state the researchers, led by Vlad Costin of the University of Sussex. “Meaning provides us with the sense that our lives matter, that they make sense, and that they are more than the sum of our seconds, days, and years.”

From this definition, the researchers extracted three core themes: coherence, purpose, and mattering.

How should we go about improving our sense of mattering? While there’s no easy answer, a good place to start is by thinking about the questions that define the concept of mattering. They are: “my life is inherently valuable,” “even a thousand years from now, it would still matter whether I existed or not,” “whether my life ever existed matters even in the grand scheme of the universe,” and “I am certain that my life is of importance.”

Other research suggests that mattering is especially important in our professional lives. Employees who scored higher on the agree-disagree scale below, for instance, expressed higher job satisfaction and engagement.

“When employees feel like they matter to their organization, they are more satisfied with their jobs and life, more likely to occupy leadership positions, more likely to be rewarded and promoted, and less likely to quit,” state the authors of this research, led by Andrew Reece of the company, BetterUp, and David Yaden of the University of Pennsylvania. “These findings lend weight to the basic value of mattering in organizational contexts.”

Pillar #3: When it comes to happiness, age is on your side.

Youth, they say, is wasted on the young. Fortunately, the same cannot be said about happiness.

Most research suggests that happiness, well-being, and life satisfaction increase gradually from early adulthood to middle age. And, a recent study published in the journal Social Psychology and Personality Science echoes this finding with respect to optimism.

To arrive at this conclusion, researchers at the University of California, Davis, analyzed data from a large sample of U.S. adults between the ages of 26 and 71. At four time points across a seven-year period, participants were asked to complete the Life Orientation Test, a widely used and validated measure of optimism. A modified version of the Life Orientation Test is shown below.

The researchers used people’s responses from this scale to plot the trajectory of optimism across the lifespan. Consistent with prior work, they found optimism to be lowest in people’s 20s, then rise steadily into people’s 30s and 40s, peaking in people’s 50s, and gradually declining after that. Specifically, it was at age 55 that people experienced the highest levels of optimism.

“We found that the trajectory of optimism from ages 26 to 71 was characterized by normative age-graded increases, at a rate of about .15 standard deviations per decade, before plateauing around age 55,” state the researchers. “Together, these findings suggest that the development of optimism across the adult lifespan follows an inverted U shape, with a peak in late midlife, similar to other positive personality traits such as self-esteem and satisfaction with life.”

Conclusion: New psychological research suggests that autonomy, mattering, and age are three important components of happiness. While the age component will take care of itself, it’s up to you to guide your life in a direction that will enhance your sense of mattering and autonomy.