by Dr. Bohdanna “Billie” Zazulak: Taras Shevchenko, Ukraine’s most revered poet and artist, wrote these words, before he was imprisoned for supporting the independence of Ukraine, 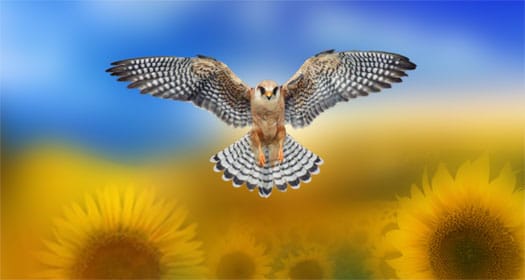 simply for writing in his native language which was illegal and subject to persecution by the Russian occupiers. Shevchenko’s patriotic poem speaks to the struggles of the oppressed and invokes the falcon as a revered icon of his Motherland, symbolizing pride, courage, and freedom.

A century after this great literary figure was penning these words, my mother’s eldest sister Nadia was caring for wounded soldiers in bunkers of the Western Ukrainian forests, as a Ukrainian Partisan Army freedom fighter in WWII. Nadia’s family fled to the western world for freedom, yet she courageously bid farewell to her parents and younger siblings to heroically honor her inner calling.

Although we never heard from Nadia again, my grandmother kept her photograph on the mantle, and each day prayed that someday they would be joyously reunited. In the photograph, “Nadia” (“Hope” in Ukrainian) beamed from her sunflower vinok like a halo over her blonde braids. A Ukrainian vinok, where beauty and tradition intertwine with flowers and colorful ribbons, is a headdress for girls and women of Ukraine, and a powerful solar symbol of glory, victory, and peace.

I wore vinoks as a young girl when singing, dancing, and playing piano at concerts and festivals. Our cultural heritage has always been paramount with a strong emphasis on tradition, attending Ukrainian Grammar School during the week, and Saturday School where we studied theology, history, and traditional literature that was banned in the Soviet Union.

My father, a chemist during the week, volunteered as a teacher. Many years he taught me his favorite subject of Ukrainian geography.  Although he wasn’t allowed to step foot in Ukraine since a teenager (50 long years passed before he reunited with his family), he conveyed his great passion for the rich, sacred land. Through his words I envisioned the magical mountains, raging rivers, flora and fauna, and the diverse terrain from the vast rolling steppes to the emerald seas, and developed the same deep love for our Motherland.

On Sundays we attended Ukrainian Catholic Church, with many of my family as clergy. We spent our summers and holidays with Ukrainian Scouts and at a Ukrainian community summer resort where we formed lifelong bonds in nature, rooted in our shared heritage. We are a family and are all now suffering the unprovoked, brutal Russian invasion of our homeland as a world-wide family of almost 70 million, one of the largest diasporas in the world.

The borders of Ukraine have been carved up countless times throughout history by competing powers, yet Ukrainian cultural identity has never wavered and continues to flourish despite Russian intimidation. Ukrainians have been defiant in the face of oppressors, declaring independence most recently in 1991 with the collapse of the Soviet Union.

The Russian war upon Ukraine is a retaliation, not only against Ukraine’s young and independent sovereign state, but against the Ukrainian people and our culture, which Putin views as an obstacle to his political sphere of influence. However, Putin has miscalculated the pride, courage, and freedom of the Ukrainian people.

The complexities and ambiguities of pride have long been debated by ancient philosophers and theologians. Aristotle describes “pride” as the “crown of all virtues”, yet the dark side of pride has also earned the top spot on the list of seven deadly sins of Christian teachings. In a positive sense, pride is the dignified emotion we experience when we achieve something great, cultivating self-respect, self-worth, and self-esteem.

A higher manifestation of pride is when we recognize our “self” as one with others, inspiring us to work together for a common cause, as exemplified in the unified rise of Ukraine and all her supporters. Yet the Bible warns that pride may also “goeth before the fall” into a dark abyss of arrogance, righteousness, and intolerance. A healthy pride promotes confidence and fulfillment, whereas a destructive pride leads to egocentrism, greed, and destruction.

The current crisis is illuminating the stark difference between the bright light of the Ukrainian patriotic pride to preserve our culture and way of life, versus the imperialist pride that is driving an evil mission to wipe out Ukrainian identity and rich history, with a direct attack on the values and morals that bind Ukraine and the free world together.

The courage of the President Zelensky, First Lady Olenna, the Ukrainian Army and entire nation, has stoked a fire within hearts all over the world to fuel passionate momentum towards a common cause with deep love. This powerful union is resisting the vile Russian onslaught of unprovoked war with remarkable strength, determination, and resilience.

The war is not just with the Ukrainian armed forces, but with the entire Ukrainian population. Men and women, young and old, are taking up arms against trained soldiers of the second strongest military force on the planet, willing to lay their lives on the line as their ancestors did, cultivating this courageous spirit for future generations.

Inspired by the valor of Ukrainian historical figures throughout centuries of aggression, persecution, and genocidal attacks, we are witnessing the living, breathing example of heroism: standing up to power even in the face of seemingly insurmountable odds. This highest level of courage is achieved only with confidence in something greater than us, and Ukrainians are demonstrating this ultimate manifestation of faith; self-sacrifice for the glory of truth, liberty, and endurance of the soul.

The barbaric invasion of our peaceful country is a flagrant violation of the international community’s principles of justice and law; secure national sovereignty, territorial integrity without threat, and the right to self-determination and self-expression. The struggle for independence has touched every family and has been built on the blood of countless Ukrainians, rooted in the rich heritage of fierce warriors and free souls.

This spirit has lived on through the romantic ballads of love, valor, and resistance to external authority, and is echoing throughout the free world. Civilian volunteers are being outfitted by the military en masse, with heroes emerging every day to rally the free world in an extraordinary moment of history.

Tens of thousands of freedom lovers from abroad have joined the fight to defend our security, culture, and sacred land.

Tyrants will always try to oppress, but throughout history have always failed. Good will always triumph over evil, and love will always extinguish hate. As lovers of liberty, we must not sleep while our values are under siege. Our thoughts, our words, our dreams, and our glory give us power to fulfill our purpose. The Ukrainian falcons are rising up against the onslaught of death and destruction under the leadership of President Zelensky, who has unified the free world with dignity, love, and grace under fire.

I am horrified and heartbroken to watch a home I have never lived in, yet one that is so dear to my soul, ravaged by war. These feelings are echoing through the Ukrainian diaspora, with rippling repercussions throughout the world, assaulting our belief in free dreaming. Ukrainians are fighting for all our lives as we know them and will continue to fight for the best of our world history, as this brutal invasion is not just about Ukraine. As Ukrainians say, “if you allow the pig under the table, it will climb on top of the table”. Yet the falcon pride, courage and freedom will prevail over a greedy pig.

Pray for Ukraine, support the free world, and make your voices heard.

May we someday soon all fly free with the falcon spirit!

Click here to support the urgent financial needs of Ukrainian Women’s Organizations responding to the needs of women and children on the ground.

Click here to learn even more ways to support Ukrainians today, no matter where you are or what your budget.