This Is the Number One Anti-Aging Exercise (According to Science)

by Kaitlin Vogel: Lucille Ball once said, “The secret of staying young is to live honestly, eat slowly, and lie about your age…” 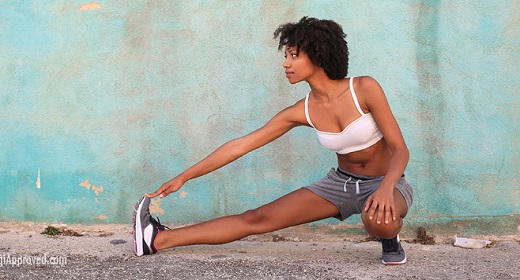 But what if you didn’t have  to lie about your age? What if there was a way to turn back the clock? According to a study from the Journal of Applied Physiology, a cardio workout is the key to staying young.

But how is this possible?

Is There Such a Thing as Anti-Aging Exercise? A Cardio Workout May Be Your Ticket to the Fountain of Youth

Researchers examined the effects of lifelong exercise by comparing people in their 70s (who exercised approximately five days a week) to a younger group and a sedentary group of people their own age.

For the study, participants exercised on an indoor bike. They used maximum oxygen consumption (VO2 max) during intense exercise to measure their cardiovascular health.

VO2 max declines by approximately 10 percent each decade after age 30, and it’s this decline that is associated with a greater risk of disease and mortality. Participants also had a muscle biopsy to gauge aerobic enzyme activity and how capillaries were affected.

Is a Cardio Workout Really an Anti-Aging Exercise? Here Are the Results From the Study

Regardless of your age, incorporating a cardio workout into your exercise routine will keep your body biologically younger for longer.

Researchers found that the performance group had better metrics than the fitness group in certain areas. Of course, cardiovascular capacity was one of them.

However, metrics such as muscle health and capillaries to enhance blood flow were the same between both groups. This shows that higher intensity training didn’t necessarily impact aerobic endurance.

It turns out the more physically active we are, the slower our bodies age.

“‘Exercise wins’ is the take-home message,” said Scott Trappe, leader of the research team in a Ball State University study. “We saw that people who exercise regularly year after year have better overall health. These 75-year-olds—men and women—have similar cardiovascular health to a 40- to 45-year-old.”

The Takeaway on Anti-Aging Exercise and Cardio Workouts

If you’re 30, but you’re not getting adequate exercise and activity in your daily life, your body may feel much older.

Likewise, just because you’re 70, doesn’t mean you’re 70 years old from a biological perspective. We’ve all met people who seem younger than they actually are, and now science has provided a clue as to why.

It turns out the more physically active we are, the slower our bodies age. Sign me up for the local running club!

To live a long, healthy life exercise 30 to 60 minutes each day – more specifically, a 30- to 45-minute cardio workout is what will really make a difference.