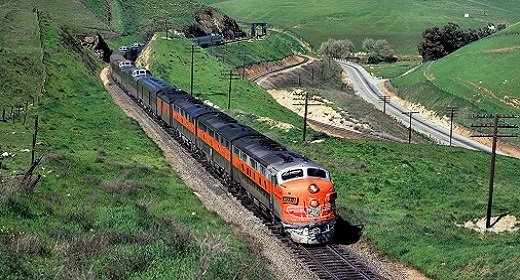 Operated jointly by the Chicago, Burlington & Quincy (the Burlington Route); Denver & Rio Grande Western (Rio Grande); and Western Pacific the train traveled through some of the most spectacular scenery in the country.  As a result it is not surprising the CZ continued to do well even even during rail travel’s waning years after World War II.  Following the CZ’s cancellation as a through service in 1970, Rio Grande picked up the torch and operated a truncated version along its territory between Denver and Salt Lake City/Ogden as the Rio Grande Zephyr.  The RGZ remained in service for more than a decade until the D&RGW finally handed over the train to Amtrak during the early 1980s. The national carrier brought back the California Zephyr name and today it remains one of the most popular long distance trains in the country.

Mike Schafer and Joe Welsh note in their fabulous book, “Streamliners: History Of A Railroad Icon,” that the California Zephyr had a “double beginning.” An argument could be made that it actually had a so-called “triple beginning” as two notable events preceded its inauguration.  In 1934 the Burlington made a splash by deputing one of the first-ever streamliners, the Zephyr 9900 (also known as the Pioneer Zephyr) during April of 1934.  The sleek, stainless-steel contraption was the first of its kind powered by a diesel engine and proved more successful, operationally, than UP’s design.  Both wowed the public and led to the Burlington christening an entire fleet of Zephyrs through the 1940s. In 1939 the Golden Gate International Exposition opened on Treasure Island in San Francisco Bay.  The CB&Q, Rio Grande, and Western Pacific subsequently came up with a plan to provide a through train for this event; known as theExposition Flyer it traveled virtually the same route as the later California Zephyralbeit utilized largely heavyweight Pullman equipment and was steam powered. 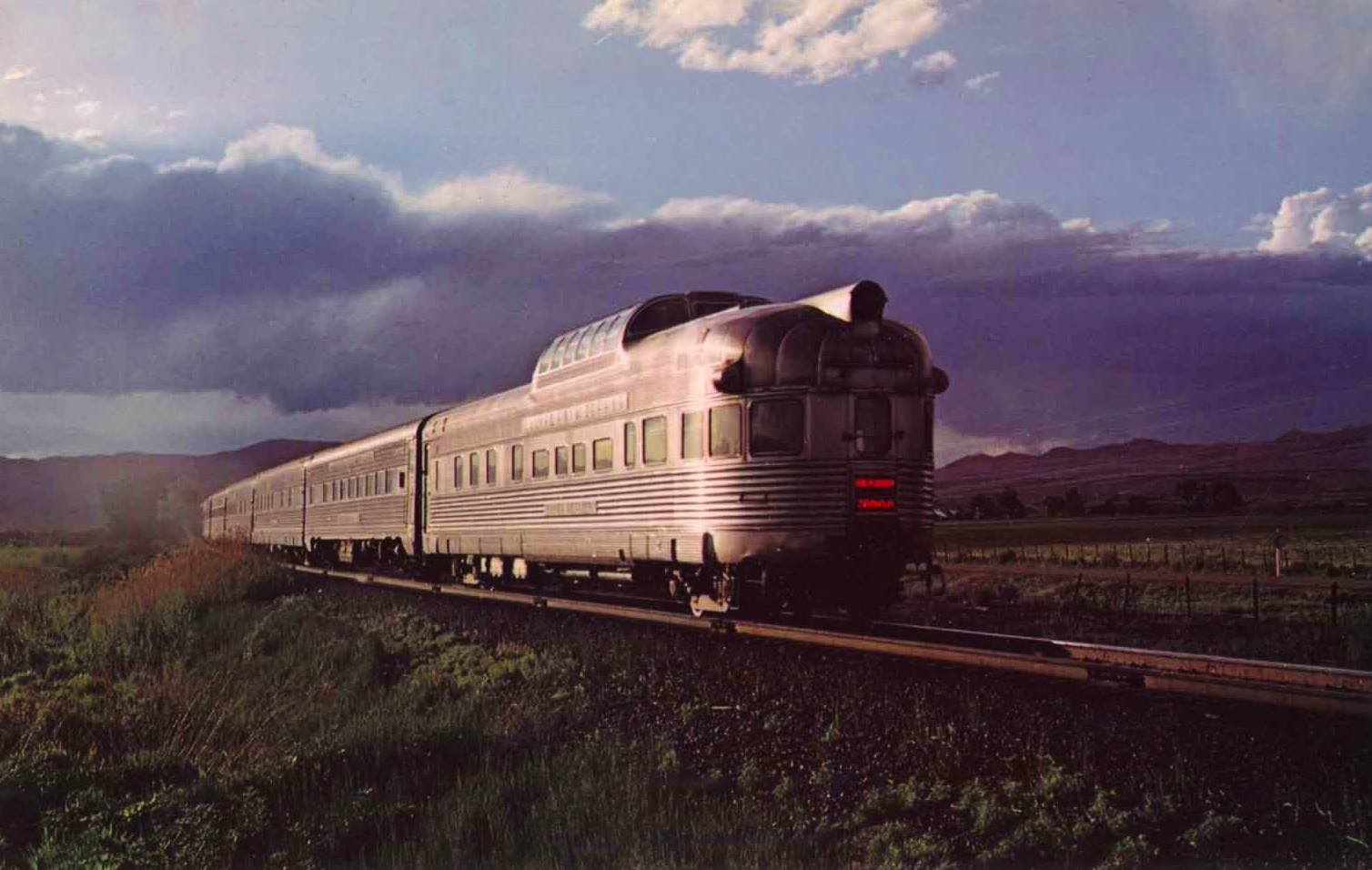 The train entered service on June 10, 1939 and became so popular thanks to its scenic route the railroads agreed to continue its operation after the San Francisco event.  Into the 1940s the Flyer gained diesel power and some lightweight equipment while the three lines contemplated revamping the entire service with new, streamlined cars and locomotives after the war (theFlyer remained in service until the CZ’s inauguration in 1949).  The Burlington led the charge, buffered by the success of its Zephyr fleet and new Vista-Domes first delivered by the Budd Company in 1947.  According to, “The Art Of The Streamliner” (Bob Johnston, Joe Welsh, Mike Schafer), Budd designer John Harberson toured the CZ’s proposed route, which passed through the Colorado Front Range, entered scenic Glenwood Canyon, worked its way along California’s rugged Feather River Canyon, and finally wound through the rolling green hills of Altamont Pass before terminating in Oakland.  He concluded that trainsets should feature no fewer than five dome cars, nearly unheard of at the time, for maximum viewing pleasure of the passengers. 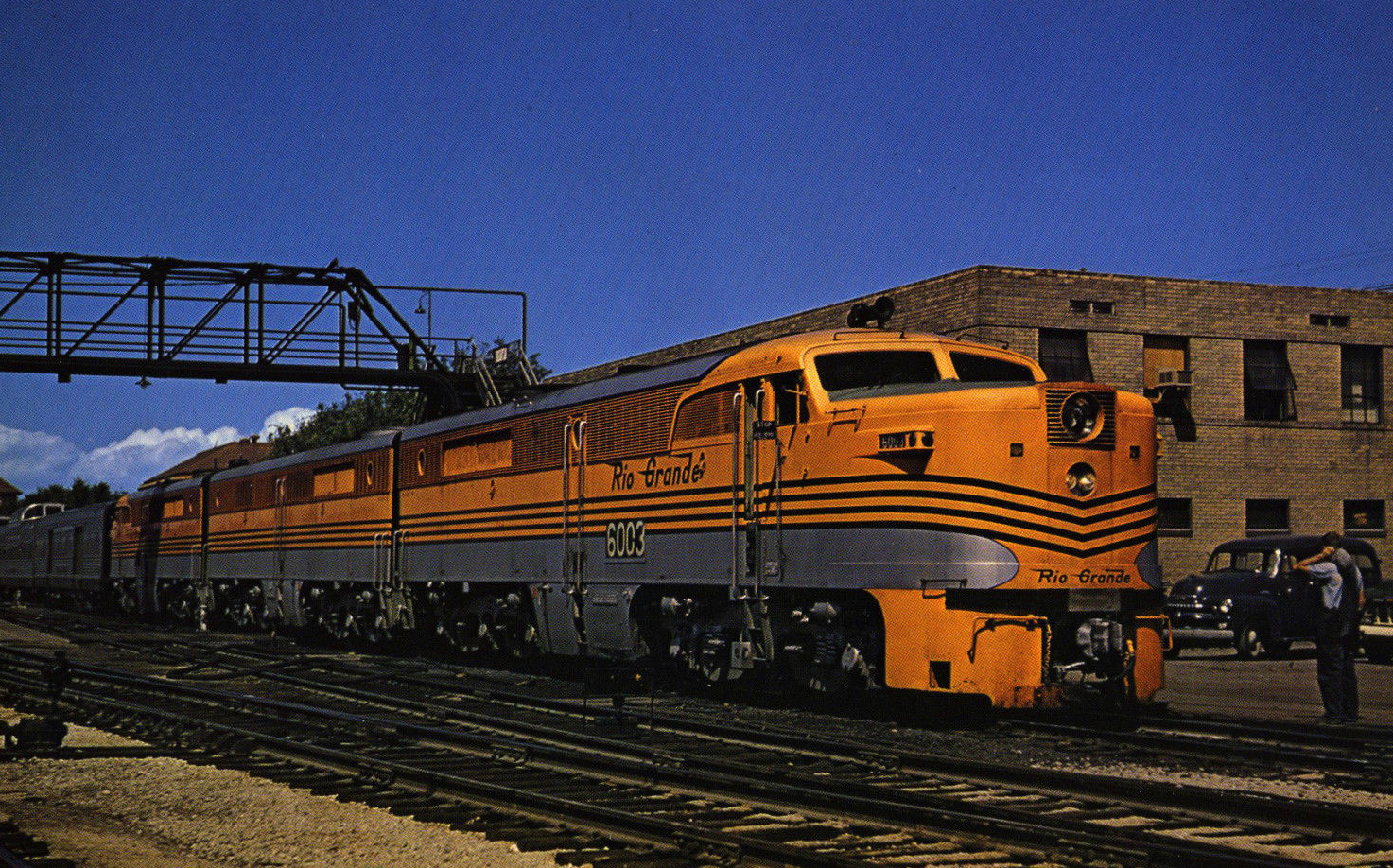 Individually, the three roads could not offer a flagship, transcontinental streamlined train such as the Santa Fe, Union Pacific, Southern Pacific, Great Northern, Northern Pacific, or even the Milwaukee Road. The Burlington provided the longest stretch of unbroken territory reaching as far west as Denver. The railroad was also the gateway to Chicago, the key to any successful long-distance passenger train; without large markets at each end point no train would garner considerable patronage and there was no bigger market than the Windy City.  The Burlington understood this (as did all other western lines) and already worked with allying roads GN and NP to provide service from Chicago to the Pacific Northwest with popular trains like the North Coast Limited and Empire Builder.  In a first within the industry, and perhaps only time it proved wildly successful, the California Zephyr was routed specifically as a scenic train.  It sacrificed speed for viewing and the concept proved a huge success. 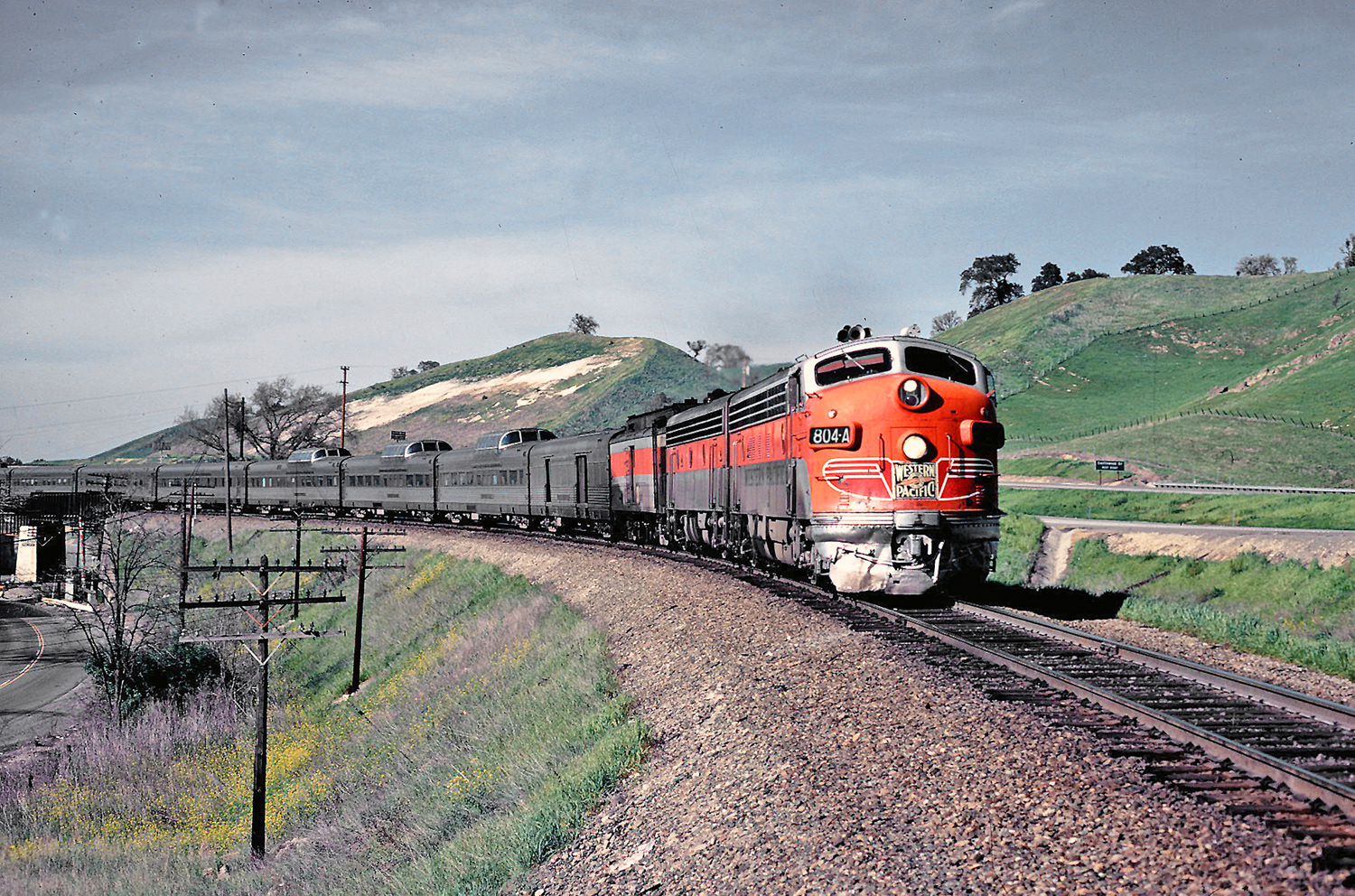 Just prior to the train’s cancellation it is seen here operating west on the Western Pacific near Hearst, California in March of 1970. Drew Jacksich photo.

In December of 1945 all three agreed on what was dubbed the California Zephyr. In 1947 they placed an order for six sets of stainless-steel cars from the Budd Company, all of which carried a western theme but with the prefix “Silver” as per Burlington’s standards.  As the authors point out in “Streamliners,” eachCZ trainset normally consisted of a baggage, three reclining-set Vista-Domecoaches, a Vista-Dome dormitory-buffet-lounge, diner, four sleepers, and theVista-Dome sleeper-lounge observation bearing the train’s famous neon “California Zephyr” drumhead featuring the Golden Gate Bridge. Officially, the new train debuted on March 20, 1949 when the first eastbound consist, train #18, departed from Oakland under the Western Pacific.  It was immediately splashed as “The most talked about train in America” and despite its slower schedule the use of new lightweight cars and diesels enabled the CZ to sped up its running times from 60 hours, under the Exposition Flyer, to just 51 hours.

Christening A Legend, The California Zephyr

A huge celebration took place on March 19, 1949 in San Francisco to officially dedicate the new California Zephyr.  The train’s primary terminus in daily operation was Oakland with ferry service provided across the bay to San Francisco.  However, for this special event the WP backed the train down an industrial spur through city streets to the Embarcadero where Mayor Leland Cutler, WP President H.A. Mitchell, and California Lieutenant Governor Goodwin Knight gave brief speeches.  The train was officially christened by Hollywood actress Eleanor Parker and a legend was born.  The following day riders on the maiden trip were given corsages of orchids flown in from Hawaii while Edward Budd, Jr. himself, whose company had built the train’s equipment, made the trip to Chicago. 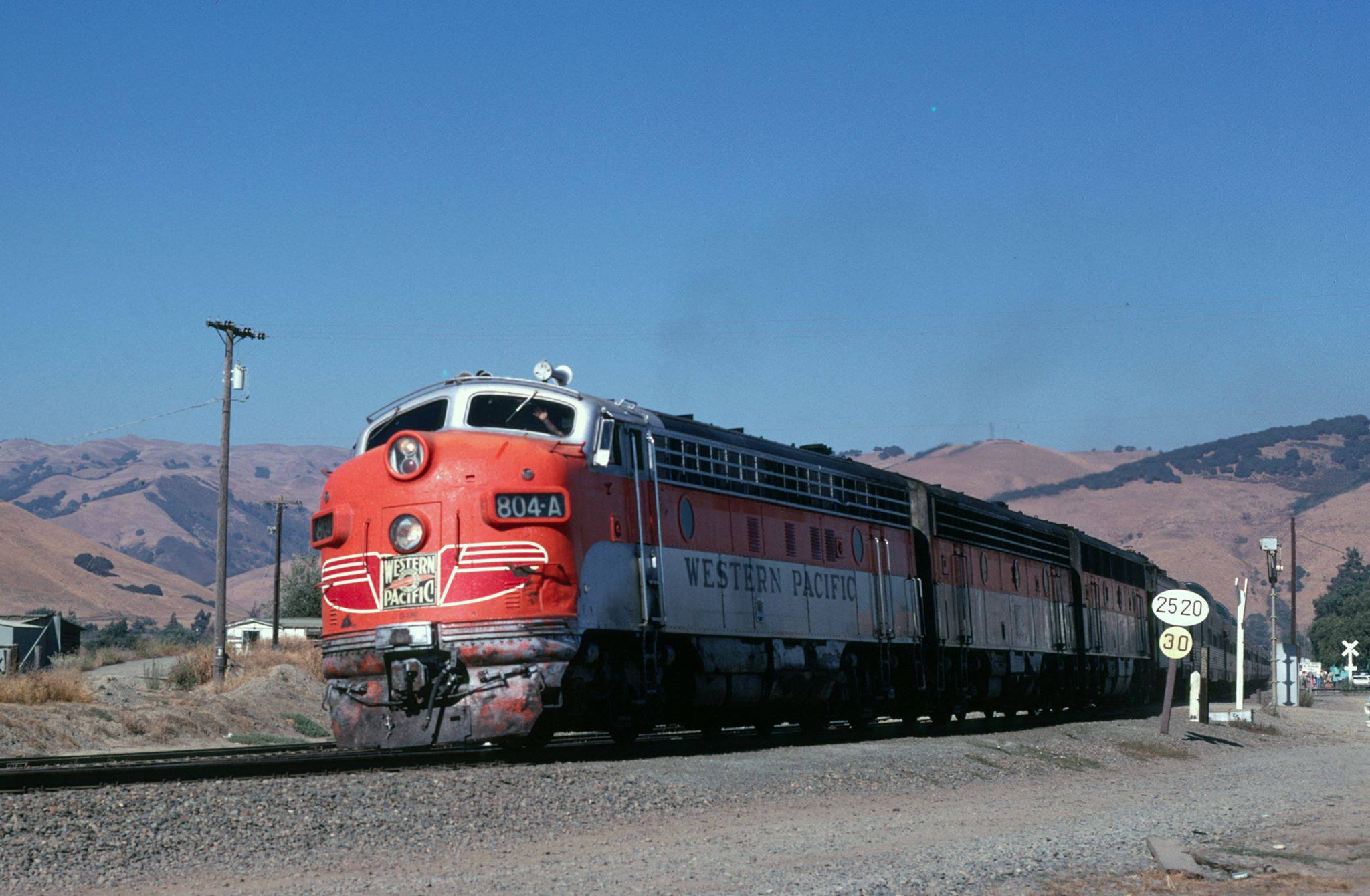 “August of 1969 finds Western Pacific’s ‘California Zephyr’ leaving Fremont for Oakland, California on the last leg of its journey. In less than a year, this portion of the train will pass into history.” – Drew Jacksich

Historically, the CZ was also noteworthy as being the first-ever transcontinental train to run with dome cars.  To provide the very best scenic enjoyment, the train was scheduled so vacationers could enjoy the fabulous views through Colorado, Utah, Nevada, and California during daylight hours.  Once again, Electro-Motive was contracted to provide the power as all three roads used a combination of the builder’s popular E and F series cab model “covered wagons” as primary road power.

Beyond the scenery, the CZ success was thanks to its friendly staff; passengers were treated warmly no matter if you were just a vacationer or a well-known celebrity (although the “rich and famous” tended to take other trains like the Super Chief and City of Los Angeles). And then, there were the “Zephyrettes,” a distinctively Burlington creation; these hostesses were courtesy, friendly, and just plain nice young women that made a lasting impression on thousands of passengers. 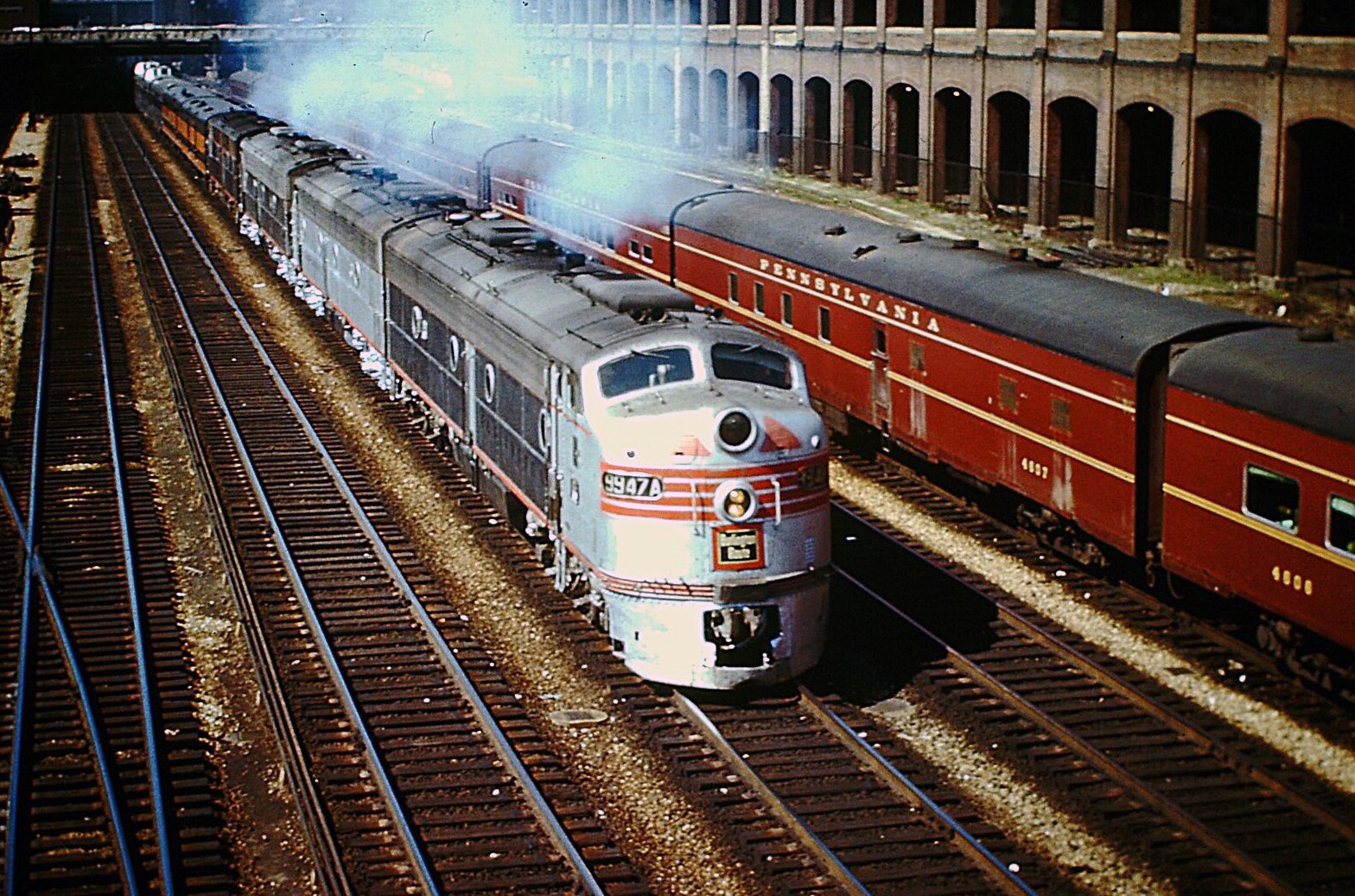 The “Zephyrettes” were a unique phenomenon during the “Silver Age” of streamlined rail travel.  Outside of the Burlington’s network no other service duplicated what the California Zephyr offered in terms of friendly on-board staff members, akin to the present-day airline stewardesses.  They traveled with the CZ from the very beginning and remained a fixture on-board until the very end during its last run on March 22, 1970.  The “Zephyrettes” held a combination of jobs from social director to tour guide and train nurse; essentially, they performed nearly any task requested by the train crew or passengers and always did so with a friendly smile.  The idea for these hostesses came from CB&Q’s Supervisor of Passenger Train Services, Velma McPeek.  It had first been tested on the Denver Zephyr and carried over to theCZ. As the book, “Streamliners,” notes former “Zephyrette” Beaulah Ecklund (1964-1970) was welcomed back by Amtrak to host the first trip of the re-inaugurated California Zephyr in the summer of 1983 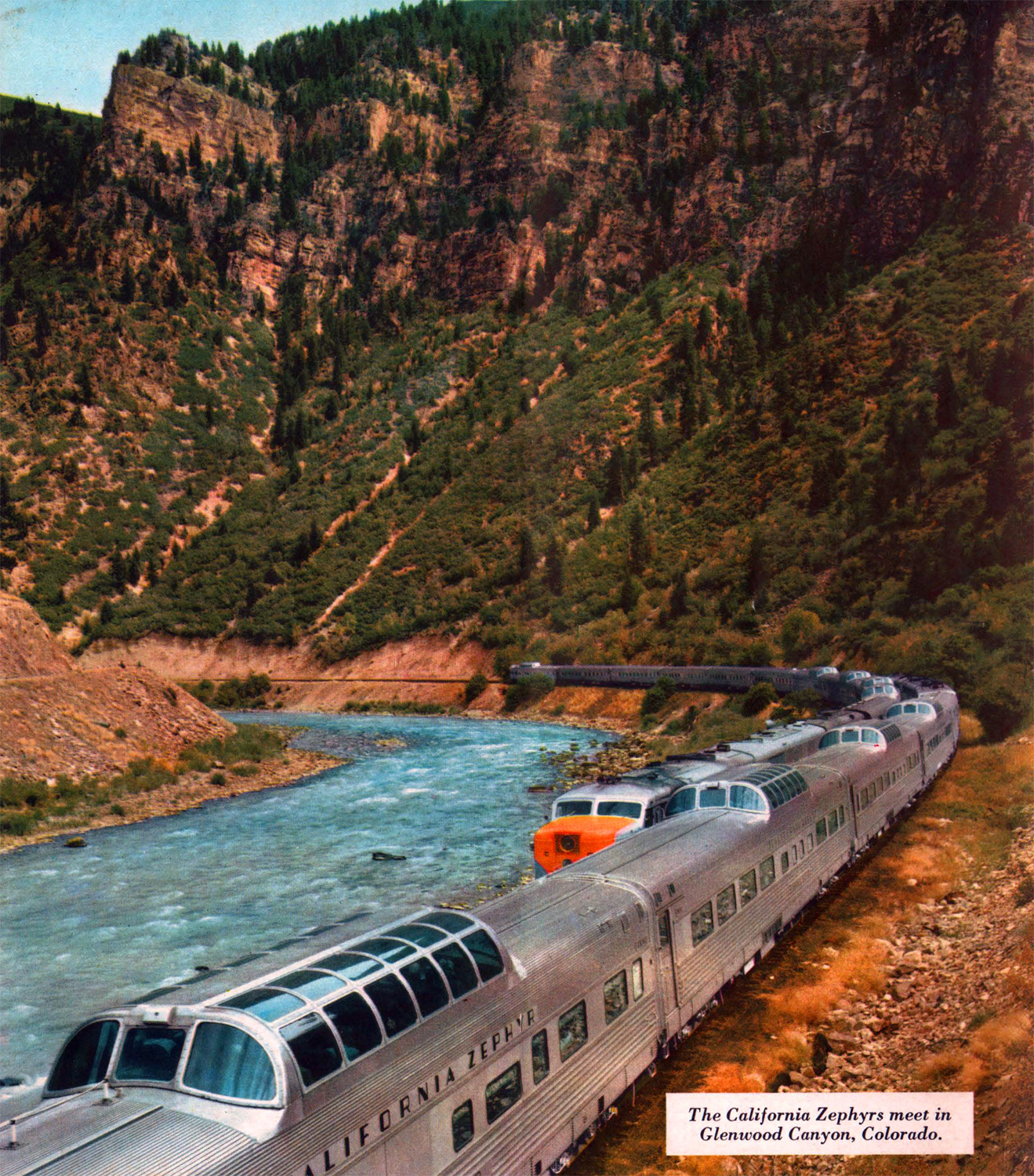 This spectacular scene shows the east and westbound “California Zephyr’s” passing one another in Colorado’s Glenwood Canyon along the Colorado River, likely taken during the late 1940s or early 1950s. Note the A-B set of Alco PA’s.

Other attractive features included prerecorded music played into passenger’s rooms and hall windows which allowed guests to enjoy views from both sides of the train.  If their was one signature car aboard-train, similar in nature to theSuper Chief’s “Turquoise Room,”  it was the buffet-lounge.  Given the moniker of “Cable Car Room” it was dressed in murals and motifs from the Bay Area and even featured scale models of San Francisco’s trademark cable cars.According to the train’s 1950 timetable it could complete a Chicago to San Francisco run in just over two days across the three different railroads; such scheduling was not bad considering its scenic routing and the fact that Santa Fe’s “

San Francisco Chief” made the run only about 3.5 hours faster (47 hours and 30 minutes).  After only a few years of operation it was clear the railroads were on to something; annually the CZ averaged about 80% ridership and was often sold out during the summer.  In 1952 new cars were ordered to meet demand and sellouts persisted throughout 1965.

The original California Zephyr route began on the Chicago, Burlington & Quincy from Chicago to Denver before being passed off there to the Denver & Rio Grande Western at Union Station.  From there travelers could enjoy the spectacular scenery of the Rocky Mountains while passing through the 6.2-mile Moffat Tunnel before reaching Salt Lake City at the Rio Grande Depot.  They would then complete their journey over the Western Pacific which traveled through the equally stunning Feather River Canyon and over the rolling green hills of Altamont Pass. Today’s version of the train, maintained by Amtrak since 1983, largely still travels the previous route albeit now utilizes the former Southern Pacific/Central Pacific corridor (part of the original Transcontinental Railroad) over Donner Pass, west of Salt Lake City, to reach San Francisco. 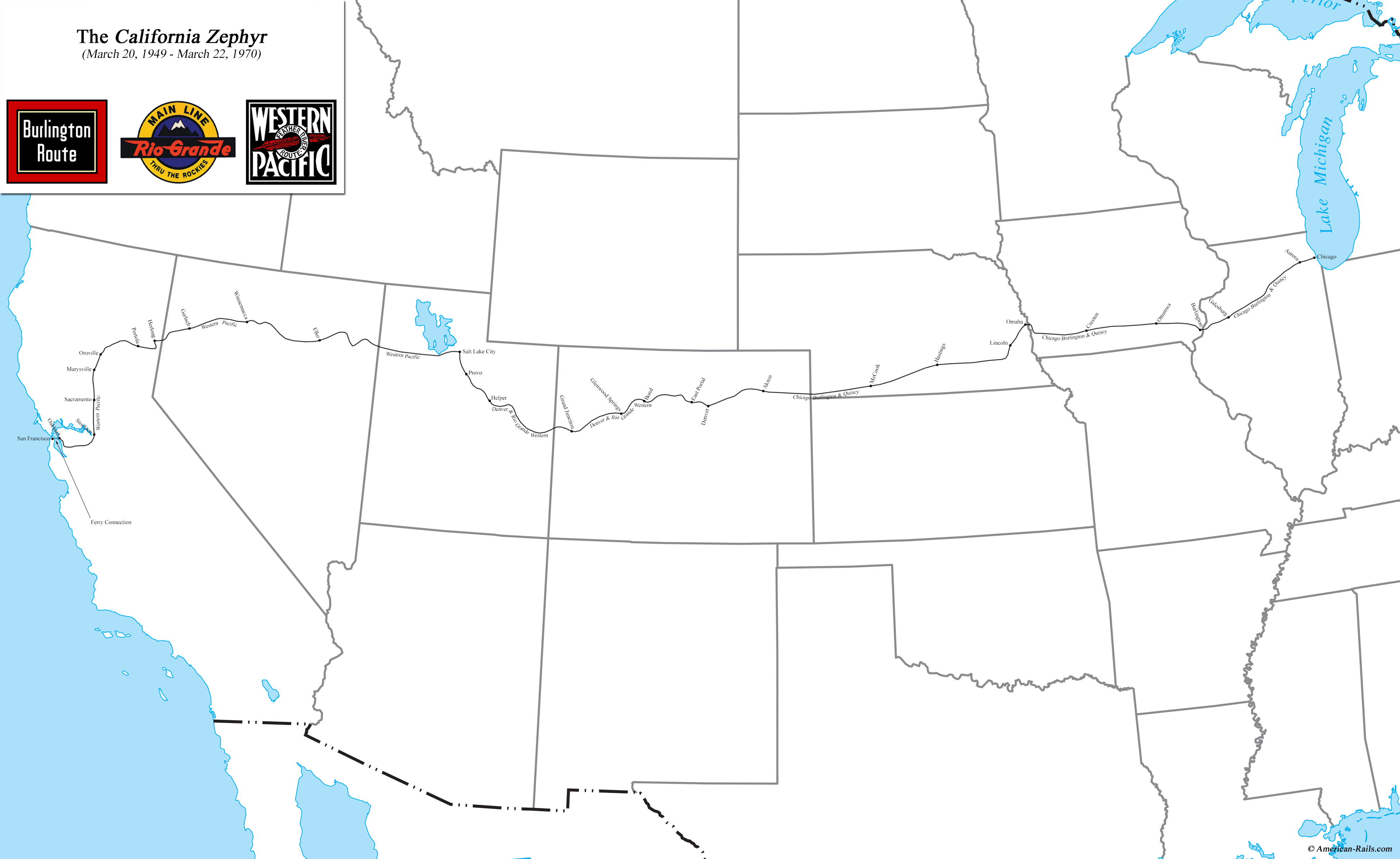 The original “California Zephyr” route map, which was operated from 1949 until 1970. Author’s work. 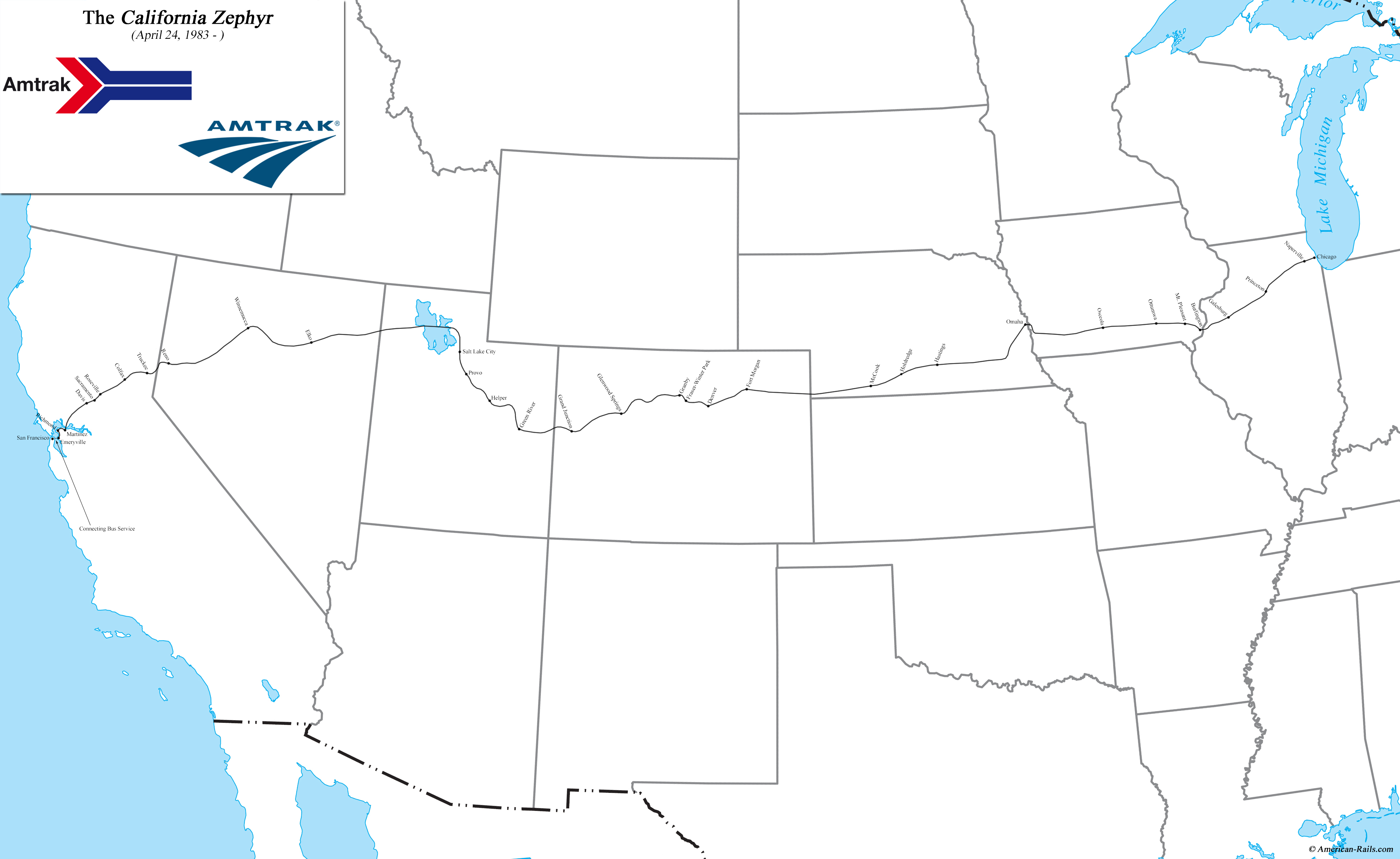 The current route of the “California Zephyr” under Amtrak since 1983. Author’s work.

Along the way you will pass through such historic locations as Truckee, Norden, Yuba Pass, Emigrant Gap, Colfax, and Sacramento.  To read more about the Transcontinental Railroad please click here.  The current California Zephyr also features a fraction of the original’s services with “Superliners” throughout which double as a dome cars for maximum viewing above and sleeping quarters below.  The train’s food service has been deemed acceptable but again falls short of the high quality meals 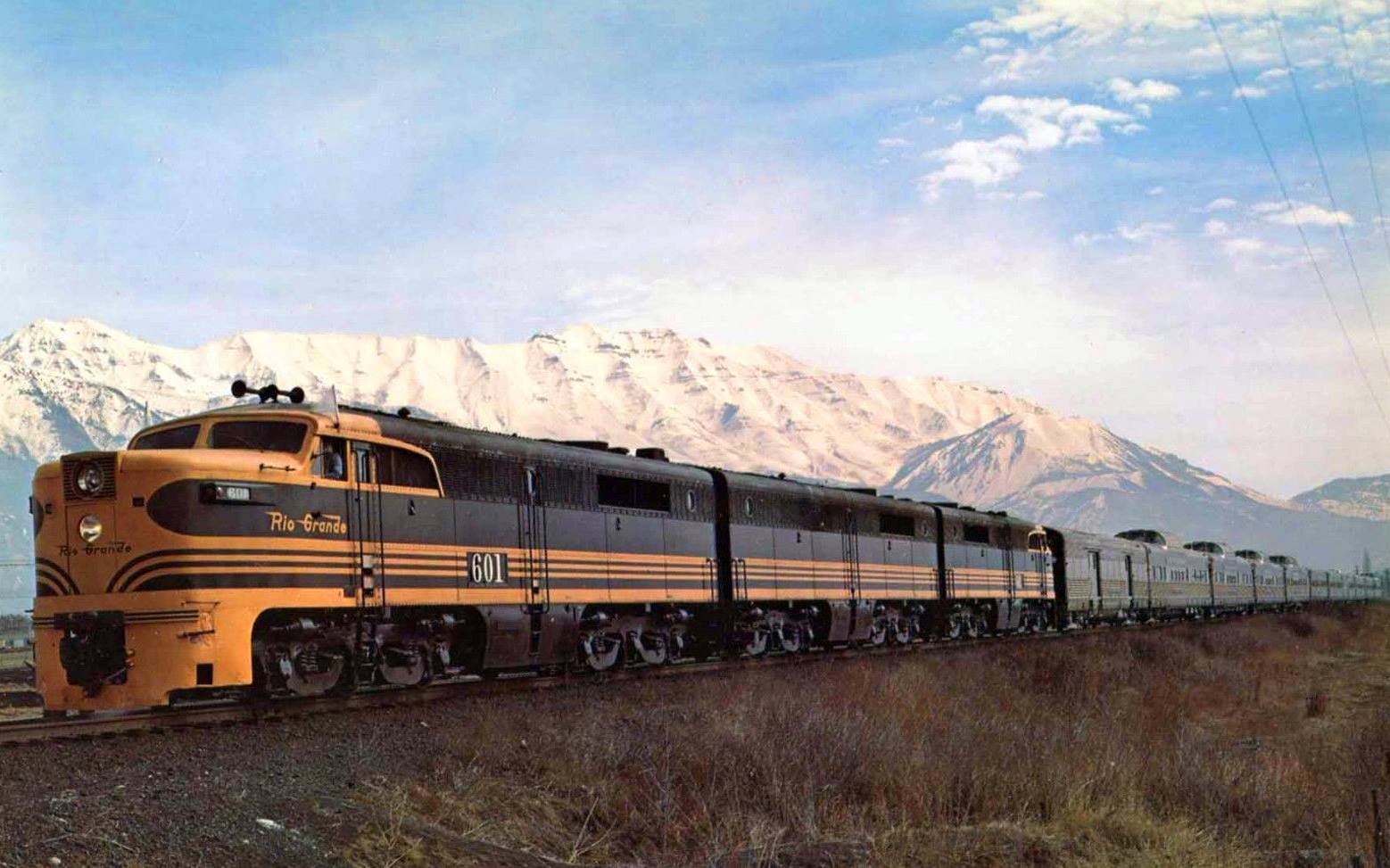 The CB&Q and Western Pacific carried the train for much of its journey while the Rio Grande was in charge during perhaps the most scenic stretches across the Rocky Mountains between Denver and Salt Lake City.   The downfall of the original CZ is an interesting story. While patronage remained incredibly high throughout the 1960s, particularly when compared to the severe declines experienced overall by the industry, costs to operate the train were increasing so rapidly that even strong, sustained ridership made it increasingly unprofitable to operate.

The larger, and more financially stable carriers, Rio Grande and Burlington, could more or less weather the growing red ink although the much smaller Western Pacific could not.  During September of 1966 the WP petitioned the Interstate Commerce Commission to discontinue its leg. 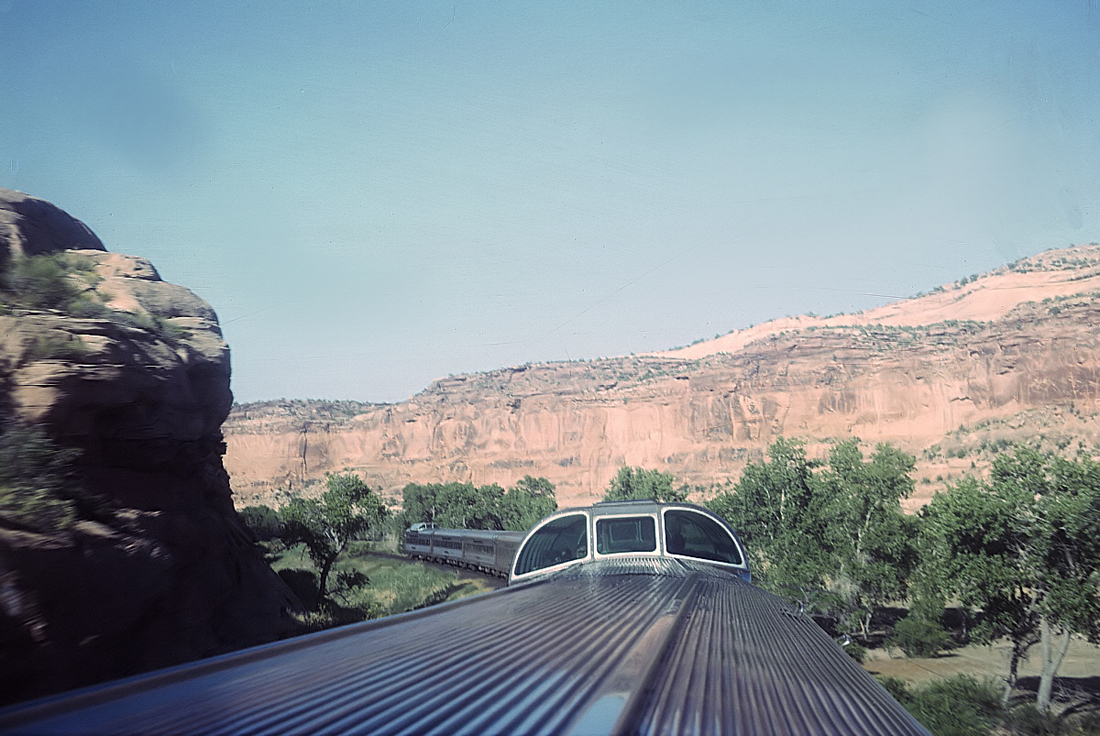 Roger Puta captured this scene from inside one of the domes on train #17, the westbound “California Zephyr,” running over the Rio Grande in September, 1967.