Look With Your Heart: Lessons From My Time With My Grandmother

by Mia Tagano: There is a quote somewhere, perhaps it is a lyric to a song “look with your heart not with your eyes”… 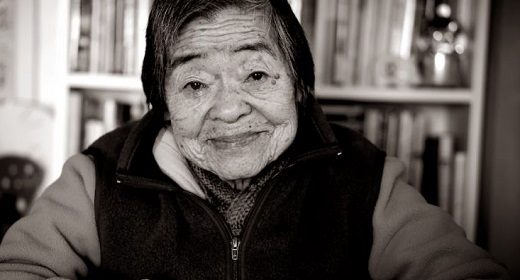 I love this and try whenever possible to include my heart as I go throughout the day, especially when meeting new people.

Recently, my 94 year old grandmother was moved from hospital to a rehabilitation/care facility. I have been visiting her almost daily. She has dementia and has no short term memory –she doesn’t know I came yesterday but is grateful to see me today. We laugh easy together, play solitaire in partnership, high-five with both hands when she “wins” at the end; we play only as long as it is fun then I hold her hands, or she holds mine – We hold each other. She used to hold just one hand but nowadays she reaches for both and squeezes tightly. Sometimes, she falls asleep. Still holding on. When I go to leave, I kiss her face – literally – her forehead, her eyes, cheeks and mouth – she giggles and thanks me for coming to visit her. I thank her for her love. It is an intimate and beautiful period of our life together.

My grandmother shares a room with another woman. Here, it is not the same feeling as it would be if you chose your roommate. Sometimes you aren’t aware of the other person, sometimes you are so aware and feel the room to be too small for the both of you, or you are grateful there is another person there so you are not alone. It depends on the individual. I try to be considerate of other people – Say hello, introduce myself, let people know that I am Mutsuko’s granddaughter, and then let them have their privacy – try not to be too loud with my grandmother, try to stay aware that we are sharing the same space. When I leave I say good-bye – basic stuff I think.

My grandmother’s current “roommate” has been in the room just over a week. When I first came in and she was there, I said hello as usual. She nodded to me but didn’t use words, she seemed agitated which is normal considering the place (either folks are in some sort of rehabilitation or they are too old to care for themselves – it’s not necessarily a choice to be here, and it feels just a step up from a sterile hospital environment)- in fact, mostly she grunted, a lot. I was not sure if she was impaired mentally as well as physically.

When I took my grandmother outside, I asked the lady if she was okay with the screen door open a bit. She nodded yes. You won’t be too cold? I asked. She shook her head no. Later when I left, I hugged and kissed my grandmother good-bye and wished her sweet dreams. And, then took the hand of the woman and wished her sweet dreams as well. She looked at me with such sweetness, with gratitude. The next day, we had a repeat of the day before but when I left this time I took both of her hands and held them as I said sweet dreams. She looked at me deeply, her face smiling.

Slowly, without words, we were building a relationship based on kindness. Yesterday, I said my usual hellos but this time as I was sitting with my grandmother I included Andrea in the conversation a bit more. I started to use her name this day. She began to try to explain what was going on with her. She tried and tried to speak but even one word was difficult. She was grunting and hitting herself out of frustration. I said, it must be frustrating. She said, yes! I said, take your time, we aren’t in a rush. No rush, she said. She started tapping her arm that was in a sling. Not broke, she said. And, she started to try to explain more but was getting frustrated again as the words struggled to come out. One word at a time, I said. One. Word. At. A. Time. She said. You had a stroke, I said. (I had heard the nurses talking earlier). YES, she said. Your arm doesn’t work right now so it is in a sling because the weight isn’t helpful just hanging like that. YES she said. I have a friend who had a similar experience; I understand, I said. You understand! You understand! She said. You are doing well. Your face doesn’t droop which is typical with folks who’ve had strokes. She looked at me with astonishment – It doesn’t droop? I smiled as I shook my head no. It doesn’t droop! It doesn’t droop! She bounced a bit on her bed as she said this. You are strong. I said. I am strong, she said. Look, Look! She said. Tone, Tone! She was showing me one of her legs – the side that wasn’t working well. Watch, Watch! She lay back and struggled slowly to move her right knee to meet her left, the right leg floppy, she helped it a bit with her good hand, slowly, her knees balanced together for a moment and for that moment she was in control again of her body. Time stopped. And, then, we both screamed a “Whoo Hoo” and clapped together. I said, Congratulations! That is a really big deal Andrea. You are getting better. Step by step. Step by step, she said. I went to her and hugged her. She put her head on my shoulder and cried. And then hugged me a second time. We were both crying then.

After this, she slowly shared more about her life and I found out more of who this woman is, found out more about her spirit. And, all of this happened in the span of 30 minutes. Amazing. It doesn’t take long to make a real intimate genuine human connection with someone. It only takes stopping for a moment, listening deeply, and looking with your heart rather than your eyes. YES. Moment to moment. Step by step.

Update: Last month, I shared a story about my grandmother and a woman named Andrea. Andrea had had a stroke and was learning to talk again and move her legs. When I wrote last, she was barely getting one word out at a time and had just relearned to bring her knees together while lying down. I have been gone a week and my grandmother was moved to another part of the facility. I went to Andrea’s room to see how she was doing. She practically leapt out of her bed! You came back! She said along with other full sentences filled with joy. She hugged me so tightly as we laughed and I shouted, you’re talking, you’re talking! I told her that I had shared her story and that people from all over the world were thinking of her and praying for her. She stopped then and started to cry. She held my hand. They are praying for me? Yes, I said. Tell them thank you she said. Tell them that I walked for the first time – 15 steps. Tell them, there will be more she said. Tell them, Thank you.