The Story Behind Rosa Parks and Yoga 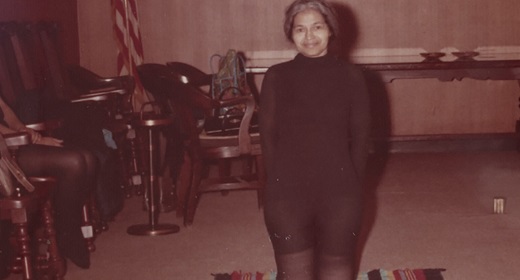 Photos of Rosa Parks practicing yoga have been circulating on social media over the past several months. In one of the images dated March 1973, Parks can be seen practicing Dhanurasana, or Bow Pose, using a blanket beneath her as a yoga mat. These images, from the Library of Congress (LoC), highlight a more intimate side of Parks outside of her work as a civil rights activist, and they tell a story about how, for Parks and other black movement workers, wellness and yoga can be radical acts of liberation.

While the photos of Parks have been on display to the public at the Library of Congress in Washington DC since last December, earlier accounts of the photos circulating the web date back to a June 2019 article published by Stephanie Y. Evans, PhD, a professor and the director of Women’s, Gender, and Sexuality Studies at Georgia State University.

Part of Evans’ work focuses on researching the intellectual history of black women, specifically as it is told in autobiographies and memoirs. “My current research examines what I call ‘historical wellness,’ which is how elder black women write about self-care,” said Evans, the author of Black Women in the Ivory Tower, 1850-1954: An Intellectual History. “I have surveyed 200 black women’s life narratives and found 50 references to yoga. One reference was from Sheila McCauley, the niece of Rosa Parks. McCauley wrote about yoga as a family practice and about Mrs. Parks as an avid yogini.”

Our Auntie Rosa, McCauley’s family memoir, co-authored with Eddie Allen, details how Rosa Parks attended yoga classes with both her niece and nephew, beginning as early as the 1960s. “The memoir reference led me to the archives to find primary sources, which is where I found the one of the LoC pictures,” says Evans. A second images was released later. “The images show Mrs. Parks sharing her yoga practice publicly a month after she turned 60.”

The LoC pictures led Evans to Rosa Parks: My Story, in which Parks details how she learned daily stretching from her mother as a child. Evans also learned of Parks’ many health challenges and the stress of being a target for her activism work as other motivating factors for incorporating yoga and meditation into her wellness practice. “What Mrs. Parks teaches us is that self-care is part of resistance—she lived to the age of 92 because she began to center her own health needs, even as she continued with lifelong activism in Detroit and beyond,” said Evans, who herself earned her 200-hour certification in Kemetic Yoga from Yirser Ra Hotep in 2017. Evans has also created Black women’s yoga history, a resource that highlights contributions to yoga from the Diaspora.

For Evans, the photos aren’t just about highlighting a different side of Parks: “Self-care is too often discussed as selfish. I wanted to share the photos to underscore self-care as a black women’s public health imperative. I see meditation and yoga as helpful factors in race, gender, activism, and the sustainable struggle for human rights. Mrs. Parks is part of a larger story of black women’s sustainable self-care and stress management.”

“I spent two solid weeks getting permission to share what I discovered from the Library of Congress, as well as the Rosa Parks estate representative and the Rosa and Raymond Parks Institute for Self-Development,” Evans recounts. “I was careful to follow research ethics and protocol for obtaining the pictures, and was also mindful of sharing, out of respect for her legacy.” Evans says she then shared the photos in an article for her professional organization, the Associate of Black Women Historians, which led her colleagues to share them with their networks.

Communications Professor Sarah J. Jackson was one of the first to share the photos to her Twitter account, amassing over 18k likes on the social platform. From there, other large accounts and news sites continued to share the photos of Parks, creating a viral domino effect.