Jane Morris-Goodall, Ph.D. (1934 – ) is a British primatologist, ethologist, anthropologist, and UN Messenger of Peace. Educated at Cambridge University, Goodall is considered to be the world’s foremost expert on chimpanzees… 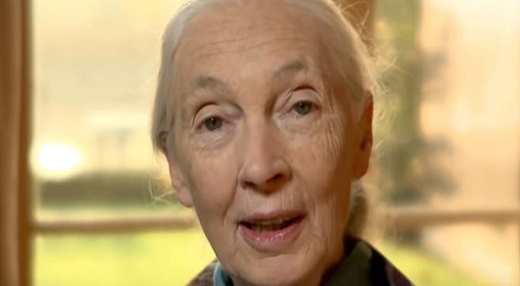 Goodall is most well known for her 55 year study of social and family interactions of wild chimpanzees in Gombe Stream National Park, Tanzania. Goodall has worked extensively on conservation and animal welfare issues. She has served on the board of the Nonhuman Rights Project since its founding in 1996 and is the founder of the Jane Goodall Institute for chimpanzee research and the Roots & Shoots global youth program.

Goodall’s mystical experience occurred in the forest of Gombe soon after she had returned from an intense six-week trip to America that involved “fund-raising dinners, conferences, meetings, and lobbying for various chimpanzee issues”:

“Lost in awe at the beauty around me, I must have slipped into a state of heightened awareness. It is hard – impossible really – to put into words the moment of truth that suddenly came upon me then. Even the mystics are unable to describe their brief flashes of spiritual ecstasy. It seemed to me, as I struggled afterward to recall the experience, the self was utterly absent: I and the chimpanzees, the earth and trees and air, seemed to merge, to become one with the spirit power of life itself. The air was filled with a feathered symphony, the evensong of birds. I heard new frequencies in their music and also in singing insects’ voices – notes so high and sweet I was amazed. Never had I been so intensely aware of the shape, the color of the individual leaves, the varied patterns of the veins that made each one unique. Scents were clear as well, easily identifiable: fermenting, overripe fruit; waterlogged earth; cold, wet bark; the damp odor of chimpanzee hair, and yes, my own too. And the aromatic scent of young, crushed leaves was almost overpowering….

That afternoon, it had been as though an unseen hand had drawn back a curtain and, for the briefest moment, I had seen through such a window. In a flash of “outsight” I had known timelessness and quiet ecstasy, sensed a truth of which mainstream science is merely a small fraction. And I knew that the revelation would be with me for the rest of my life, imperfectly remembered yet always within. A source of strength on which I could draw when life seemed harsh or cruel or desperate.”

Quoted from Jane Goodall’s Reason for Hope: A Spiritual Journey.