by Lauren Capp: There are yoga postures recognizable to many who are not familiar with the practice… 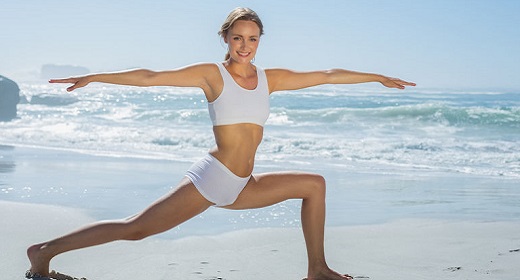 Downward facing dog, tree pose, and warrior poses are examples of those that are memorable and often imitated.  Warrior II (Virabadrasana II) is a posture that is sometimes used to advertise yoga studios and businesses on social media, websites, and magazines.  Like all yoga asana, looks can be deceiving as these postures are considerably challenging for the body.  Warrior II pose has many benefits physically and mentally.  Once alignment, breathing, and physicality are understood, the posture can greatly change.

There are countless arm balances, inversions, and twisting postures that appeal to practitioners.  However, returning to the “basics” (although anyone who has held warrior II for more than 5 breaths knows it is not basic) will challenge the practice in several areas.  Breaking down what is often considered a simple yoga posture will bring attention to cues and alignment technique, enhancing the posture immensely.

Warrior II How to:

In a standing position with legs abducted (wide leg stance), point the right foot forward to the front of the mat.  The left hip is in extension as the left foot is parallel to the back of the mat.  The front heal is aligned to the middle arch of the back foot as it is rooted firmly for stability.

The right hip is in a flexed position with the knee bent at a 90 degree angle.  The right thigh is parallel to the floor and the knee is aligned to the center of the right foot.  (It is common for the knee of the bent leg to lean to the left or right creating pressure on the lateral and medial side of the knee.  Aligning the front knee to the center of the foot assists in avoiding that pressure.)

The crown of the head and cervical spine are aligned over the base of the spine (sacrum/coccyx) as shoulders are matched up over hips.  The arms are abducted (like airplane wings) with a slight external rotation of the shoulders.  This creates expansion in the chest and lengthens the pectoralis muscles.  Balance in the body can be maintained by connecting to the abdominals and creating stability with the feet.   Directing the gaze over the middle finger of the right hand will help create focus and balance.

*The one misconception of cues that is repeated in yoga classes is “square hips to the side wall”.  If there are students with flexible hips or those who are hyper mobile there could be compression in the hip of the bent knee.  Excessive repetition of the posture and that particular cue overtime can cause a breakdown of ligaments, tendons, cartilage, and soft tissue.  Keep attention on other anatomical cues that will enhance the posture and build strength for a healthy body.

Warrior II is a highly effective posture that strengthens the body and creates balance and awareness in space.  When the arms are abducted out to the sides (like airplane wings), this strengthens the supraspinatus muscle of the rotator cuff.  The supraspinatus muscle is the most commonly torn muscle of the rotator cuff which is why reinforcement in the area is key. (A weak suprasinatus will make for a challenging and unbearable warrior II.)

The deltoids, pectoralis major, and triceps brachi strengthen and assist in abduction of the shoulders. The upper trapezius and rhomboids lengthen and become stronger in abduction of the arms.  The upright position of the axial skeleton with shoulders over hips strengthens the abdominals when asking the body to balance.  The slightly contracted rectus abdominus, transverse abdominis and intercostals build strength and create stability as the practitioner balances during exhalation.  The bent knee and flexed hip of the front leg are creating additional strength in the quadriceps group, adductors, piriformis, gluteus medius, knees, calf, and ankle.  The back leg is in extension, strengthening the quadriceps group and gluteus maximus while lengthening the hamstrings and psoas muscles.

Warrior II challenges endurance and focus by holding the posture for prolonged periods of time.  Learning the basics of a posture and understanding the mechanics/musculature will change the posture dramatically.  Proprioception (the brain’s ability to sense the positioning and movement of different body parts) in any of the yoga asana will benefit a practice and advance it to another level.  Warrior II is not only powerful in a yoga practice but also strengthens the entire physical body and challenges stamina and focus.