How Meditation Enhances The Senses

by Bess O’Connor: I’ve tried closing my eyes and reading braille with my fingertips—it’s not easy… 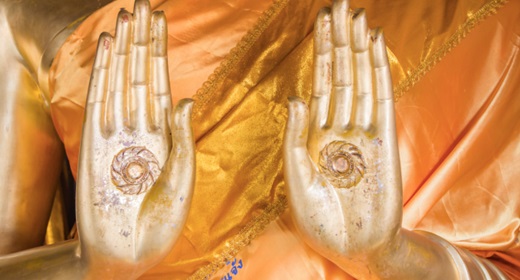 I often think what practice it must take to be able to read those tiny bumps and make sense of a word or even letter. How in the world do people who are visually impaired do it with such precision and so fast? Well, new research from Ruhr-University Bochum and the Ludwig-Maximilians-University München may have some insight.

The study conducted with experienced Zen-Meditation scholars showed that concentrated awareness can stimulate learning mechanisms, similar to physical training. This study, done during a meditation retreat is uncovering exciting new findings on the plasticity of the brain.

A special zen meditation technique was used and by scholars with many years of meditation practice. During a four-day, silent Zen-retreat in the spiritual center “Benediktushof” in Germany, meditation practice was at least eight hours a day. All meditators practiced the same form of meditation—a non-specific monitoring of thoughts and surroundings (awareness).

In addition, some meditators added on two hours more meditation per day with a special finger-meditation. They were told to focus on their right index finger and become aware of all the sensations that spontaneously arise in only that finger. The finger meditation group showed a significant increase in the tactile acuity of the right index and middle finger that was meditated on. The control group that did not practice the finger meditation, on the other hand, showed no sign of enhanced sense of touch.

To study the sense of touch in all fairness, researchers measured what they call the “two-point discrimination threshold”. This marker they used, indicates how far the two stimuli have to be apart to be discriminated as two separate sensations. The finger meditator’s performance was enhanced, on average, by 17 percent.

To further prove the findings, visually impaired people have 15 to 25 percent more tactile acuity than your average sighted individual. This heightened sense of touch is due to such concentrated focus on that perception to make up for the lack of visual information perceived. Therefore, mediation induces the same changes achieved by intense long-term training.

Neuroplasticity is the ability for the brain to adapt and restructure itself to improve perception and behavior. Meditation is shown to enhance plasticity and learning processes that are similar to active training or physical stimulation.

“The results of our study challenge what we know about learning mechanisms in the brain. Our concept of neuroplasticity must be extended, because mental activity seems to induce learning effects similar to active stimulation and physical training,” says Hubert Dinse, the lead neuroscientist from the Neural Plasticity Lab.

In short, this is the first time a study has proven that concentrated thought, awareness and meditation, without any physical stimulation, can improve perception and sensory acuity.

What more interesting finds will we learn about the benefits of meditation? It seems as though the benefits are infinite.