One Nation Under God? – Rabbi Rami

by Rabbi Rami: Can individual states establish a preferred religion? “Lots of Americans believe the United States is a Christian nation, as opposed to a nation established by Christians…” 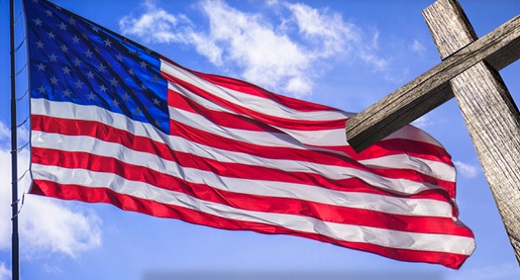 A recently released Pew Research study shows “laws, policies, and actions by state officials that restrict religious beliefs and practices [have] increased markedly around the world.”

The United States is in a unique position. Our uniqueness doesn’t come from the fact that the pilgrims were fleeing religious persecution since—as soon as they could get away with it—they started persecuting others for their faith. What makes the U.S. exceptional is the First Amendment to the U.S. Constitution, which guarantees freedom of religion. Or does it?

The First Amendment prohibits the federal government from passing laws “respecting an establishment of religion or prohibiting the free exercise thereof,” but it says nothing about the states establishing a religion. This is why a few years ago the North Carolina legislature introduced a resolution claiming the state did have the right to establish a religion. While the resolution was never voted on, it did open the conversation as to whether a state could set up an official religion. After all, states have their own plants, bugs, and birds, why not their own gods?

Lots of Americans believe the United States is a Christian nation, as opposed to a nation established by Christians. The reason we don’t make Christianity our official state religion is because no one can agree as to which version of Christianity is the true Christianity. If we could, we wouldn’t have dozens of Christian denominations.

Joseph Smith put this question of Christian authenticity directly to God in the 19th century, and God told him no existing version of Christianity was authentic and instructed Smith to establish the true church, which we call today the Church of Jesus Christ of Latter-day Saints. So, if we were to listen to God, Mormonism would be the official religion of the United States. I doubt that would sit well with most of my Christian neighbors who hide in their bathtubs  whenever Mormon missionaries come knocking on their doors. [I always welcome them in to discuss theology. I’m quirky that way. Also, we don’t have a bathtub.]

But states are different. And what about cities? The Constitution doesn’t explicitly prohibit cities from establishing their own religion. Brooklyn might vote to make Hasidic Judaism its official religion, and San Francisco/Silicon Valley might vote to make Transhumanism their official religion, hoping not for the End Times but for the moment of Singularity when carbon- and silicon-based life forms merge into some new creation: “Our Algorithm who art in Cloud, hallowed be thy Name.” (Siri? Alexa? As soon as you pick one name, the followers of the other would start a religious war against you. Humans. Go figure.)

The takeaway for me is simple: Keep religions as powerless as possible. This is why, I suspect, when Jesus told his disciples to spread the Gospel, he commanded them to “take nothing for the journey: no walking stick, no bag, no bread, no money, no extra shirt” (Luke 9:3). It’s hard to rule over people and restrict their religious freedoms when you only have one shirt.