by Joan Halifax Roshi: Compassion is not an idealized state. It is a profound realization that we are not separate from one another… 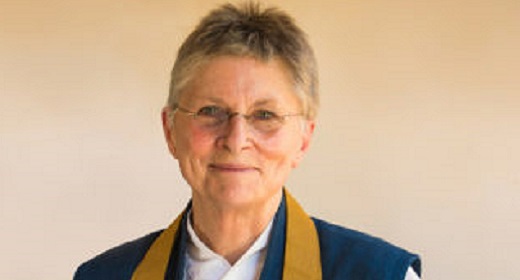 The second boundless abode is compassion.  To develop compassion is to learn to be open to suffering.  This often is a gradual process.  Through mindfulness we begin to recognize suffering in ourselves.  This is how we become aware that we all suffer in one way or another.

The ability to develop compassion with strength is a determining factor in sustaining our work with sickness, loss, and all the forms of suffering that we encounter in the experience of dying.  Compassion is not an idealized state. It is a profound realization that we are not separate from one another.  It involves the ability to feel another’s suffering. Like lovingkindness, it is fundamentally interactive and ultimately has no subject and no object.  Lovingkindness and compassion are the perfume of the realization of nonduality.

The practice of compassion has four aspects:

1.  Sharing joy and suffering with all beings, in the realization that we are not separate from any being.

2.  Wishing freedom from suffering for all beings.

3.  Responding to suffering in order to transform it.

4.  Being free of any thought as to the outcome of our action.

I have encountered great compassion in many dying people.  Zen teacher Issan Dorsey, as he was dying, felt the suffering of others deeply and seemed to have even greater equanimity as his compassion deepened.  He was a very open and experimental person.  His dying opened him to an even greater degree, allowing him to let go of everything around and in him. He practiced compassion with flawless humility.